EPYC is AMD’s flagship mainstream server microprocessors and supports 1-way and 2-way multiprocessing. The first generation was originally announced back in May 2017 and replaced the previous Opteron server family with the introduction of the Zen microarchitecture for the mainstream market.

With the second iteration of the EPYC processors, AMD has released a game-changing processor family for servers. Introduced to the market in August 2019, AMD EPYC™ 7002 Series Processors are based on the company’s Zen 2 architecture supporting up to 64 cores (128 threads) and 8 memory channels per socket. This sets a new standard for the modern data center.

If you now want to understand how to obtain world record performance for your business, we recently published a new SUSE Best Practices tuning guide that helps you to get the best out of SUSE Linux Enterprise Server running on AMD EPYC™ 7002 Series Processors. This document, written by my colleagues Mel Gorman, Matt Fleming, Dario Faggioli, and Martin Jambor (in close collaboration with their peers at AMD), provides an overview of how some computational-intensive workloads can be tuned on SUSE Linux Enterprise Server 15 SP1. 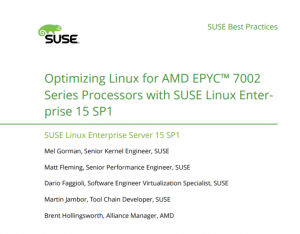 After providing an introduction to the architecture and topology of the AMD EPYC™ 7002 Series Processors, the guide covers topics such as memory and CPU binding, high-performance storage devices and interrupt affinity, automatic NUMA balancing, power management, security mitigations and hardware-based profiling.

The second part of the document describes how to use SUSE Linux Enterprise Server and the 2nd Generation AMD EPYC™ Processors for virtualization. In detail explained are the allocation of resources and the tuning of the host as well as of the virtual machines. And – very important – the guide includes quite a few performance test scenarios and their results. 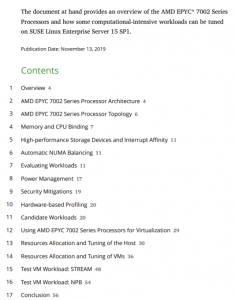 Want to learn more? Read the entire tuning guide at our documentation web page – this new paper will provide you with a myriad of useful and valuable information and insight on how to tune performance of SUSE Linux Enterprise Server 15 SP1 on AMD EPYC™ 7002 Series Processors.

By the way, on our documentation web pages you can also find many more SUSE Best Practices documents for a variety of topics. And if you want to write / contribute to a SUSE Best Practices paper yourself, write an email to the SUSE Documentation team at doc-team@suse.com or contact me directly (meike.chabowski@suse.com). Always happy to help!

Disclaimer: The text at hand has been written by a non-native English speaker. If you find typos or language mistakes, please send them to me (meike.chabowski@suse.com) – or if you like them, just keep them and feed them.