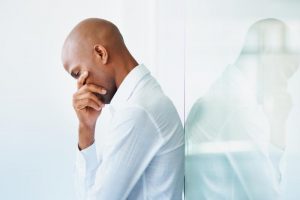 When we talk about digital transformation in the IT industry, we point to the success of organizations that embrace new technologies and how those who don’t eventually fall behind in revenue and market share. We typically measure this in terms of the comparative business success of “outperformers” who transform their business and IT operations because it’s often impossible to identify a specific action that created better results.

This is also true for diversity and inclusion in the workplace. While no one can identify a specific initiative or policy that is a root cause, studies have consistently shown that companies with more diversity tend to perform better than others that don’t. The McKinsey & Company report “Why diversity matters” looked at 366 public companies across multiple industries in the western hemisphere and determined that not only does it matter, it likely shifts market share in favor of more diverse companies. A follow-on report with nearly 1000 companies worldwide, “Delivering through Diversity”, compares its study results with those the first report. 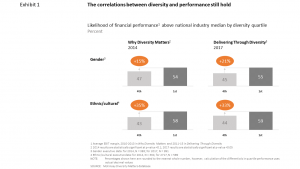 They consistently found that both gender and ethnic diversity in the executive ranks have a linear and positive impact on earnings growth. The McKinsey researchers suggested that ethnic/cultural diversity has an even greater impact on the bottom line possibly because there has already been some progress in giving women opportunities in senior leadership positions.

People often use the terms “diversity” and “inclusion” interchangeably but, when you think about it, they have very different meanings. An organization can be diverse but not be inclusive in terms of opportunities for minorities to advance and contribute. Likewise, an organization can have very little diversity but enables the few minorities it has hired the opportunity to thrive.

The key word is “opportunity.” As a person of color and, more recently, someone with many trips around the sun, I’ve been fortunate to work with leading-edge technologies and lead complex projects, both as an engineer and a marketer. But throughout my career, I’ve seen very few people who look like me in these roles. This is not only because fewer were hired but also because those who were, had positions with limited growth potential.

In principle, I believe that most tech companies will make an effort to hire ethnic minorities saying that they are committed to equal opportunity employment. When they are not successful, however, they point to a small pool of candidates to interview. While the overall number of candidates is, in fact, smaller, actual hiring isn’t keeping up with the increase in African American and Latino graduates entering the job market. A USA Today analysis shows that while tech companies in Silicon Valley have reported 2-3% of their technical staff are Black or Hispanic, there were twice as many computer science or computer engineer graduates with bachelor’s and doctorate degrees available from top-level universities in North America.

A number of factors contribute to this including:

Employers can address this last item with “affirmative action,” that is, actively looking for qualified candidates from schools with larger minority populations like HBCUs (“Historically Black Colleges & Universities”) in the United States. Even when recruiting at schools with small minority populations, making an effort to appeal specifically to that audience provides an opportunity to bring in new ideas and fresh perspectives. And, once they’ve been hired, provide opportunities to grow and advance so that they will refer their friends and family to not only apply for work but also recommend the company’s products and services.

Earlier, I mentioned that studies have shown diverse organizations outperform their competitors in earnings. The other side of that is that there is a cost associated with unfair treatment and turnover of tech employees, regardless of their backgrounds. A Kapor Center for Social Impact and Harris Poll study found that turnover costs the IT industry $16B per year. When an employee believes that he or she is not getting the job responsibilities that lead to advancement and higher salaries or are not rewarded when they do, there are costs associated with lost productivity, lost experience, and backfill hiring. Stereotyping and hostile work environments are also forms of unfairness that contribute to turnover.

Organizations can more effectively increase earnings through diversity and avoid turnover costs by treating it as an investment, and not just a moral obligation. A culture that embraces diversity gets the benefit of more ideas, which leads to better products and services, appealing to a broader set of customers. It also helps employers cast the widest possible net in attracting the best talent. A working environment that facilitates inclusion, with mentors and executive role models for everyone helps to retain that talent and attract even more.

When I consider the legacy of Dr. Martin Luther King, Jr., I think about his dream that his children would “not be judged by the color of their skin, but by the content of their character.” As an industry that thrives on new ideas and innovation, Technology should be the leader in diversity hiring, opportunities for advancement, wages, and retention. It’s time for “Diversity Transformation” in the tech industry – where everyone has the opportunity to contribute and not be judged based on ethnicity, age, gender or sexual orientation but on his or her skills and potential to drive business success.