SUSE Rules the Stack. By a mile. | SUSE Communities
< Back to Blog

SUSE Rules the Stack. By a mile.

Last night, as the expo floor closed on the third day of OpenStack Summit, Intel announced the results of their “Rule the Stack” competition.

This competition, in a nutshell:

“build a complete OpenStack infrastructure with compute, storage, and networking and launch some virtual machines. You will be competing on speed, in TopGear style we will track the fastest competitor” 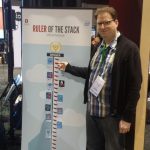 So who was the fastest?  Who managed to get a complete OpenStack installation setup and running faster than any man, woman or child on the planet?

That honor goes to SUSE’s own Dirk Mueller.

And what was his final time?

3 minutes, 14 seconds.  Nobody else was even close.

How Dirk pulled off this feat of technical wizardry using a slew of SUSE technologies:

SUSE Linux Enterprise Server 11 partnered with the upcoming SUSE Cloud 4 (based on OpenStack Icehouse).  Dirk then used Kiwi to create a compressed, hybrid install image on a USB stick.  Oh.  And that USB stick even had an awesome green Chameleon on it.

Impressive?  Sure.  But Dirk wasn’t all smiles.  I received this message from him shortly after his victory was announced:

“I could have reached -2 minutes if I had known the rules better, as you got a 5 minute time deduction when using Heat. I had provisioned heat but I didn’t use it :-/”

That’s right.  He could have managed to complete the competition 2 minutes before it began (according to Intel’s rules).

He was this close to inventing time travel using SUSE technology.