For some situations you need to test system and software behaviour in special error cases like network outages. Clusters, also demo clusters, always have to be tested in case of failing network connections. Using XEN to run systems in domUs makes it hard just to “plug off” the network cable. So how do you simulate a network failure for domUs?

Each administrative step is done as user root on dom0. In parallel you should have access to the serial console of the domU and should be logged in as any user you want. This is just to test that the network outage works fine.

Remark: You could also plug the interface into an other bridge, but you should be sure if you really want to change the configuration. But testing network problems could also include wrong-wired networking. In our example, brctl addif xenbr2 vif4.0 would assign the interface with the wrong bridge. Such test(!) could be valid to figure out a firewall behaviour with a wrong-wired scenario. But be careful not open a firewall for hackers – not even for a test…
Share
(Visited 1 times, 1 visits today) 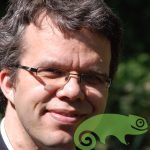