There is a natural connection. Positive vibes probably, or the zodiac sign that “brought us together”? Yes – Linux and I have been born on the same day – August 25 (well – not exactly in the same year however …). Thinking about the “double feature birthday” – and the upcoming 30th (!!!) birthday of our company SUSE on September 2nd – brought back a flood of memories and some stories that influenced my career. So – bear with me and let me share a smidgen :-).

Linux to the edge (and beyond)

I started to work quite late with Linux, in 1998 – even if I knew about it earlier. My “first contact” dates back to 1994. I was teaching Mass Media at the University of Erlangen. Our server infrastructure was administered by a student, who was a real Linux geek, and he is to blame for my interest in Linux and also in High Performance Computing (my first one big love when working in Product Marketing). He told me about Open Source, the Community, and Linux. And he made me aware of the first Beowulf Cluster that was built at NASA, using Linux, as an alternative to the very expensive HPC supercomputers. 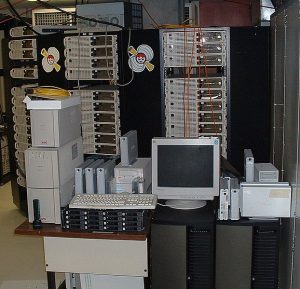 Example of a Beowulf cluster 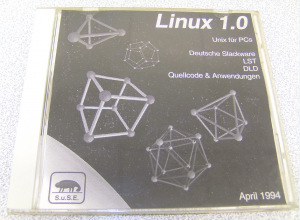 It was back in these days when Linux started its success in the High Performance Computing area. Today it is THE operating system for HPC.

The reason I mention this – and what especially strikes me here – is the following: Linux has always been OPEN and also open to bleeding edge technology that has paid off as Linux has steadily incorporated HPC features over the years. In order to gain performance, HPC systems running on Linux have been spearheading the industry with regards to the deployment of important architectures, such as e.g. the 64bit processors (Intel Itanium2 at time being, or AMD Opteron where SUSE was heavily involved in the technical development), or technologies like Infiniband. Especially managing complexity, providing power and cooling, and ensuring efficient application scaling and hardware utilization were the challenges that HPC computing needed to solve. Thus the HPC market has always been the vanguard of strange or fancy new computing technologies. Artificial Intelligence, machine learning, and much more – during the past decades, the Linux on HPC market was where vendors tested out the ideas that drove future commercial products. Not a lot of people is aware of it, or “reflects” about it, but Linux in combination with HPC very often was initiating, pushing, enforcing important technical innovations we all benefit from today.

Not too long ago, a colleague asked me: “When you started working in Linux, did you ever expect for it to be where it is today, enterprise-class and used by big organizations?” When I actually started to work with Linux myself, it was already 7 years old. I was employed by a company that wrote software – specifically tailored telebanking and telecommunication applications – for a very limited number of customers (BIG German companies …).

And we developed those applications on Linux. One of the reasons for it was that these companies wanted to get the sources for the programs we developed, and the documentation, so that worst case they could further develop the software or change it and adapt it to their needs. The other reason was security. 15.000 eyes of a worldwide developing community can see much more than just a group of in-house developers – that was their credo and motivation.

At time being I wasn’t aware of it, but these companies were quite ahead of time, because they had understood some of the key advantage of Linux at a quite early stage.  Thus, when I started to work with Linux, funnily enough for me it was quite normal that bigger enterprises were using it as a viable alternative for enterprise computing.

I just realized that many people did see this differently when I started my new life at SUSE in 2000. So many discussions popped up if Linux was enterprise-ready, if it could deliver the high availability, security and performance that enterprise customers expected to get from their operating system, etc … What really stroke me was that many data center managers I spoke to were convinced that they had NO Linux in their data center. But after having made their inventory, they all had to admit that somewhere they were running (a) Linux-based server(s) – and they just didn´t know about it.

In consequence, (one of) the most important milestone(s) for me – and I assume for Linux in general – was when we invented Enterprise Linux back in 1999/2000. This was when IBM, Marist College and SUSE began working on a version of Linux for the mainframe (the other “big love” I worked on during my time in Product Marketing). 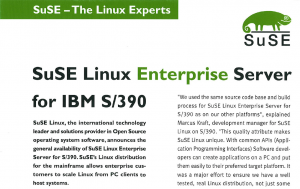 And all other Linux enterprise distributions somehow adopted the new enterprise-class business model. Today, on basis of this new business concept, SUSE has expanded its ecosystem to many thousands customers and partners worldwide, and employs more than 2000 people.

Another milestone in the history of Linux for me – and from a SUSE point of view – was the Microsoft – SUSE /Linux agreement in 2006, kind of a real historic moment. My very first emotional reaction was – I assume as for many Linux enthusiasts – all but positive … Microsoft was the big enemy, the “dark side of the Force”. And we were accused of having sold our souls to the evil! But then I realized that there was a very valid motivation that led to this cooperation. The motivation were our customers. Both companies had understood very well that no customer´s world is homogeneous, that almost all of them are dealing with heterogeneous data centers (… well – even if some higher level manager did not know about it …), where they run open source AND proprietary software. One of my colleagues reminded us of a famous quote from Mahatma Ghandi:

And indeed, looking under the surface, this partnership or cooperation with Microsoft meant that Linux had won. All together as a community we had provided the evidence that “Big Brother” could no longer ignore Linux, because Linux had become an indispensable component of the IT industry, and that it had conquered and defended successfully its claim to be an enterprise-class operating system. In retrospective, this was also the ultimate proof for me to be sure that Linux would not vanish anymore.

So, what do these stories of the earlier years of Linux teach us about the years to come? In my personal opinion they tell us: Stay innovative, dare to risk, don´t let a “this is not possible” hold you up. But at the same time, don´t forget to cultivate and grow your original Linux roots.

Disclaimer: This text at hand has not been reviewed by a native speaker. If you find typos, please send them to me (meike.chabowski@suse.com) – or if you like them, just keep them :-).

877 views
Meike ChabowskiMeike Chabowski works as Documentation Strategist at SUSE. Before joining the SUSE Documentation team, she was Product Marketing Manager for Enterprise Linux Servers at SUSE, with a focus on Linux for Mainframes, Linux in Retail, and High Performance Computing. Prior to joining SUSE more than 20 years ago, Meike held marketing positions with several IT companies like defacto and Siemens, and was working as Assistant Professor for Mass Media. Meike holds a Master of Arts in Science of Mass Media and Theatre, as well as a Master of Arts in Education from University of Erlangen-Nuremberg/ Germany, and in Italian Literature and Language from University of Parma/Italy.
Back