The expansion of High Performance Computing (HPC) beyond the niches of higher education and government realms to corporate and business computing use cases has been on the rise. One catalyst of this trend is increasing innovation in hardware platforms and software development. Both respectively drive down the cost of deploying supercomputing services with each iteration of advancement. Consider the commonality in science and business-based innovation spaces like Artificial Intelligence (AI) and machine learning. Access to affordable supercomputing services benefits higher education and business-based stakeholders alike. Thank you, Alexa?

Making half of this point requires introduction to the hardware platform used for this example. Specifically, a collection of six ARMv8 CPU based Raspberry Pi 3 systems. Before scoffing at the example understand these Pis are really being used to demonstrate the latter, yet to be made point, of simplified HPC cluster software deployment. But, the hardware platform is still an important aspect. 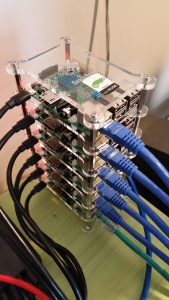 Advanced RISC Machine (ARM) began working with Cray, a dominant force in the supercomputing space, in 2014. Initially collaborating with U.S. DoE and European Union based research projects interested in assessing the ARM CPU platform for scientific use. One motivator aside from the possibility of a lower cost hardware platform was the lessening of developer angst porting scientific software to ARM based systems. Most community authored scientific software does not fare well when ported to different hardware platforms (think x86 to GPU), but the move from x86 to ARMv8 is a far less troubled path. Often origin programming languages can be maintained, and existing code requires little change (and sometimes none).

Cray unveiled the first ARMv8 based supercomputer named “Isambard”, sporting 10,000 high performance cores, in 2017. . The debut comparison involved performance tests using common HPC code running on the most heavily utilised supercomputer in the U.K. at the University of Edinburgh, named “ARCHER”. The results demonstrated that the performance of the ARM based Isambard was comparable to the x86 Skylake processors used in ARCHER, but at a remarkably lower cost point.

The Simple Linux Utility for Resource Management (SLURM), now known as the SLURM Workload Manager, is becoming the standard in many environments for HPC cluster use. SLURM is free to use, actively developed, and unifies some tasks previously distributed to discreet HPC software stacks.

SLURM makes use of several software packages to provide the described facilities.

Identify the systems that will serve as workload manager hosts, database hosts, and compute nodes and install the minimal operating system components required. This example uses the openSUSE Leap 15 distribution. Because Leap 15 is based on the same code base as SLES 15, it is hoped this tutorial can be used interchangeably between them.

Note: The mariadb and slurm-pam_slurm packages are optional installations that can be selected when their respective patterns are selected.

Following the software installations, some base configuration should be completed before implementing the SLURM control, database, or compute node daemons.

By default, the munge secret key resides in /etc/munge/munge.key.

The munge.key file is created using /dev/urandom at installation time via the command:

Subsequently it will differ from host to host. One option to ensure consistency across hosts is pick one from any host and copy it to all other hosts.

The following tasks verify that the munge software has been properly configured.

Generate a credential package for the current user on stdout:

Check if a credential package for the current user can be locally decoded:

Check if a credential package for the current user can be remotely decoded:

Compute nodes must be able to communicate with the hosts running slurmctld.

For example, if the slurmctld, slurmdbd, and database are running on the same host:

Assuming the local database was not configured during the pattern-based installation, use the following commands to configure the “slurm_acct_db” database and “slurmdb user” post installation.

Ensure the database is running.

At the “MariaDB [(none)]>” prompt, issue the following commands:

Grant rights for the user to the target database.

Note: Modify ‘localhost’ with an actual FQDN if required.

Validate the user and database exist.

Ensure the database is enabled at system startup.

The default buffer size, log size, and lock wait time outs for the database should be adjusted before slurmdbd is started for the first time. Doing so prevents potential issues with database table and schema updates, and record purging operations.

Consider setting the buffer and log sizes equal in size to 50% or 75% of the host system memory and doubling the default time out settings.

Modify the settings in the /etc/my.cnf.d/innodb.cnf file:

To implement this change you must shut down the database and move/remove the log files:

Verify the new buffer setting using the following command in the MariaDB shell:

The /etc/slurm/slurm.conf file is used by the slurmctld and slurmd daemons. There are configuration file forms available online at slurm.schedmd.com site for the latest SLURM version to assist you in generating a slurm.conf file. Additionally, if the workload manager server also provides a web server the “/usr/share/doc/slurm-<version>/html” directory can be served locally to provide the SLURM documentation and configuration forms specific to the SLURM version installed.

For a feature complete configuration file:

For a feature minimal configuration file:

Add the following directives and values to the slurm.conf file to complete the database configuration and name the cluster. The cluster name will also be added to the database when all services are running.

Copy the completed /etc/slurm/slurm.conf file to all compute nodes.

Note: The “scontrol” utility is used to view and modify the running SLURM configuration and state across a cluster. Most changes in modified slurm.conf files distributed to cluster nodes can be implemented using the scontrol utility. Using the “reconfigure” argument the utility can force all daemons to re-read updated configuration files and modify runtime settings without requiring daemon restarts. Some configuration file changes, such as authentication, system roles, or ports, will require all daemons to be restarted.

Issue the following command on a system running slurmctld to reconfigure a cluster:

Locally customized systemd files must be placed in the /etc/systemd/system directory.

Add the prerequisite “After= services” to the file /etc/systemd/system/slurmdbd.service:

Add the prerequisite “After= services” to the file /etc/systemd/system/slurmctld.service:

Use the SLURM account information utility to write to, and read from the database.

SLURM compute nodes are assigned to a job queue, in SLURM parlance called a partition, enabling them to receive work. Compute nodes ideally belong to partitions that align hardware with the type of compute work to be performed. The software required by a compute job can also dictate which partition in the cluster should be used for work.

Basic compute node deployment from a SLURM perspective is a straight forward task. Once the OS (a minimal pattern is again recommended) and the “HPC Basic Compute Node” pattern is deployed it becomes a matter of completing the following tasks.

Note: It is recommended that local firewalls not be implemented on compute nodes. Compute nodes should rely on the host infrastructure to provide the security required.

Locally customized systemd files must be placed in the /etc/systemd/system directory.

Add the prerequisite “After= services” to the file /etc/systemd/system/slurmd.service:

Taking the new cluster for a walk

A basic assessment of the state of the cluster is now possible because all daemons are configured and running. The “sinfo” utility is used to view information about SLURM nodes and partitions, and again the “scontrol” command is used to view and modify the SLURM configuration and state across a cluster.

The following commands are issued from the management node running slurmctld: 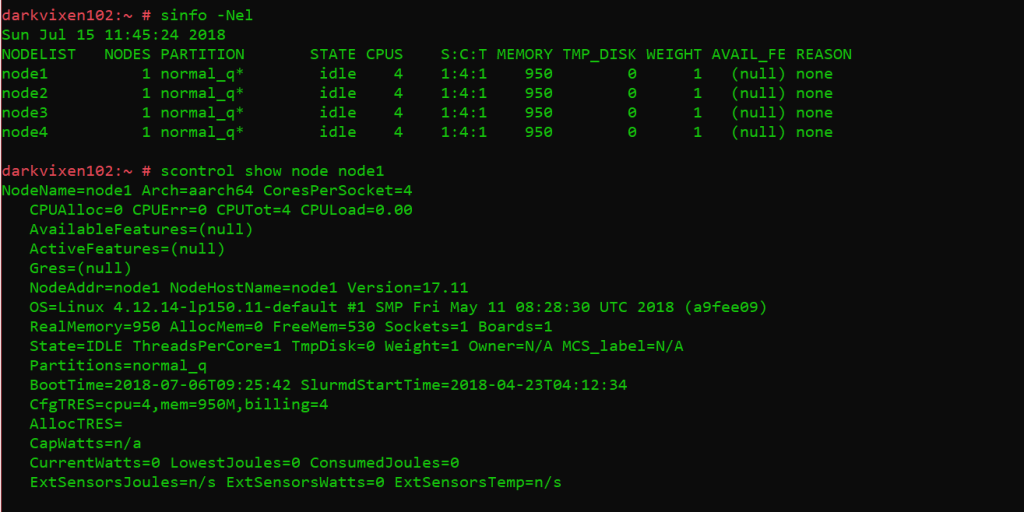 What is detailed here could easily be applied to other open source distributions of both Linux and SLURM. It should also be said that this example is not intended to over simplify what represents a proper production HPC cluster. Without even mentioning data and workflow design considerations, many standard HPC cluster system roles are not discussed. The short list would include high performance parallel file systems used for compute work operating over high speed interconnects, high capacity storage used as longer-term storage for completed compute work, applications (delivered traditionally or using containers), job submission nodes, and data transfer nodes, also using high speed interconnects. Hopefully this example serves as a basic SLURM tutorial, and demonstrates how the SLE 15 based openSUSE distribution unifies software components into an easily deployable HPC cluster stack that will scale and run against existing x86 and emerging ARM based hardware platforms. 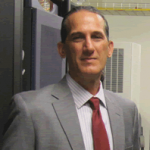 10,790 views
Lawrence KearneyLawrence has over 20 years of experience with SUSE and Red Hat Enterprise Linux solutions, and supporting and designing enterprise academic and corporate computing environments. As a member of the Technology Transfer Partners (TTP) Advisory board Lawrence actively contributes and promotes the efforts of international academic computing support missions. Currently working for the Georgia High Performance Computing Center (GACRC) at the University of Georgia supporting high performance and research computing infrastructures Lawrence publishes articles on many of his solutions as time permits.
Back