[The following article has been contributed by Ancor González Sosa and the YaST team at SUSE.]

Usual readers of the YaST Team development sprint reports on this blog already know we have been working steadily on adding support for the Bcache technology to the YaST Partitioner. We have already reached a point in which we consider such feature to be ready to be shipped with openSUSE Leap 15.1 and SUSE Linux Enterprise 15 SP1. That sounds like a nice occasion to offer the full picture in a single blog post, so our beloved users don’t need to dig into several blog posts to know what the future releases will bring regarding Bcache in YaST. Needless to say, all this is already available for openSUSE Tumbleweed users, or will be available in the following weeks.

But, to begin with, what is Bcache? It’s a Linux technology that allows to improve the performance of any big but relative slow storage device (so-called “backing device” in Bcache terminology) by using a faster and smaller device (so-called caching device) to speed up read and write operations. The resulting Bcache device has then the size of the backing device and (almost) the effective speed of the caching one.

In other words, you can use one or several solid state drives, which are typically fast but small and expensive, to act as a cache for one or several traditional rotational (cheap and big) hard disks… effectively getting the best of both worlds.

How does it all look in your Linux system? Let’s explain it with some good old ASCII art:

Take into account that the same caching device (or the same “caching set”, sticking to Bcache terminology) can be shared by several Bcache devices.

If you are thinking about using Bcache later, it is also possible to setup all your slow devices as Bcache backing devices without a cache. Then you can add the caching device(s) at a later point in time.

Last but not least, the Bcache technology allows to create virtual devices on top of an existing caching set without an associated backing device. Such a device is known as Flash-only Bcache and is only useful in some very specific use cases.

You may be thinking: “hmm, all that sounds interesting and daunting at the same time… how can I get started with it in an easy way?“. And sure you are already figuring the answer. ?

Bcache in the YaST Partitioner

When running on an x86-64 bits system, the YaST Partitioner will offer a Bcache entry in its usual left tree. There you can see two tabs. The second one lists the Bcache caching sets available in the system and its purely informative. But the first one is your entry door to all the power of the Bcache world. That tab allows to visualize, modify and delete the existing Bcache devices. And, of course, it also enables you to create new Bcache devices on top of any of your not-so-fast existing block devices. 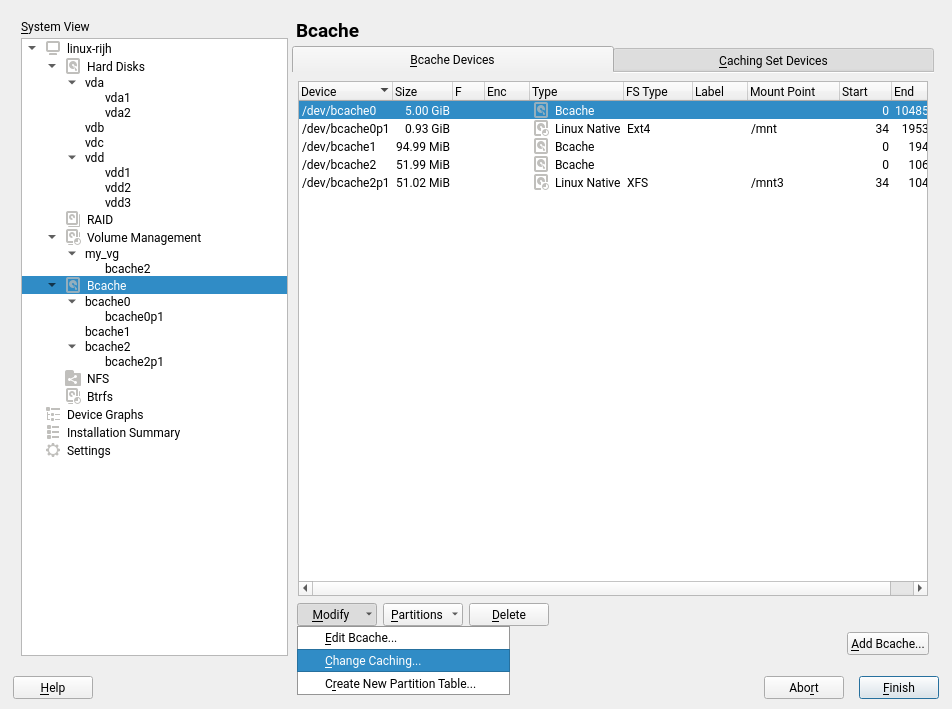 Bcache devices in the Partitioner

All Bcache devices can be formatted, mounted or partitioned with the same level of flexibility than other block devices in the system. See the previous screenshots, in which some devices contains partitions while others are formatted directly.

The creation and edition of Bcache devices allow to select which devices to use as backing and as caching, and also to choose one of the available cache modes (more on this below). Any available block devices (like a disk, a partition or an LVM logical volume) can be used as backing device or as caching one. But a screenshot is worth a thousand words. 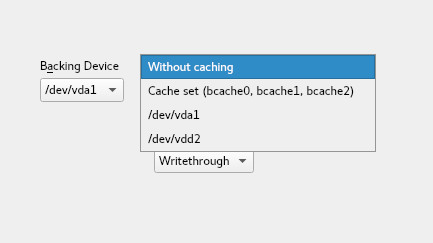 Screen for creating and editing a Bcache

The backing device is mandatory. Flash-only Bcaches cannot be created and there are no plans to include support for them in the future. But as you can see in the previous screenshot, the caching device can be specified as “without caching”. That allows to create Bcache devices that will get their caching devices in the future, as explained at the beginning of this post.

As mentioned, the third field allows to choose one of the cache modes offered by Bcache. If you are not sure what a particular cache mode means, YaST also provides a quite extensive help text explaining them. 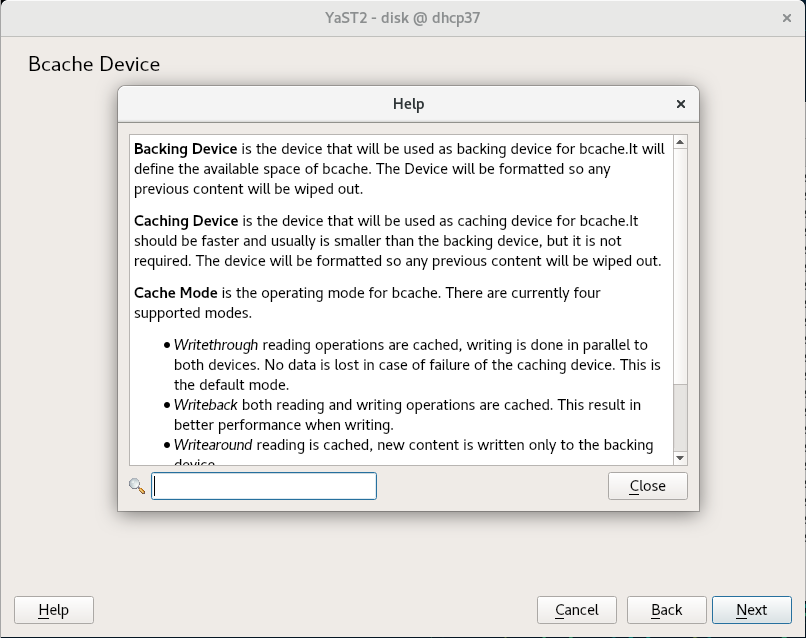 Moreover, when modifying a device, the Partitioner will limit risky combinations, preventing data loss and avoiding operations that can result in unreliable results. For example, it prevents modifying Bcache devices with a caching device that is being already used by the system, because that would require a detaching action. That could take a very long time in some situations and interfere with other operations performed by the Partitioner. 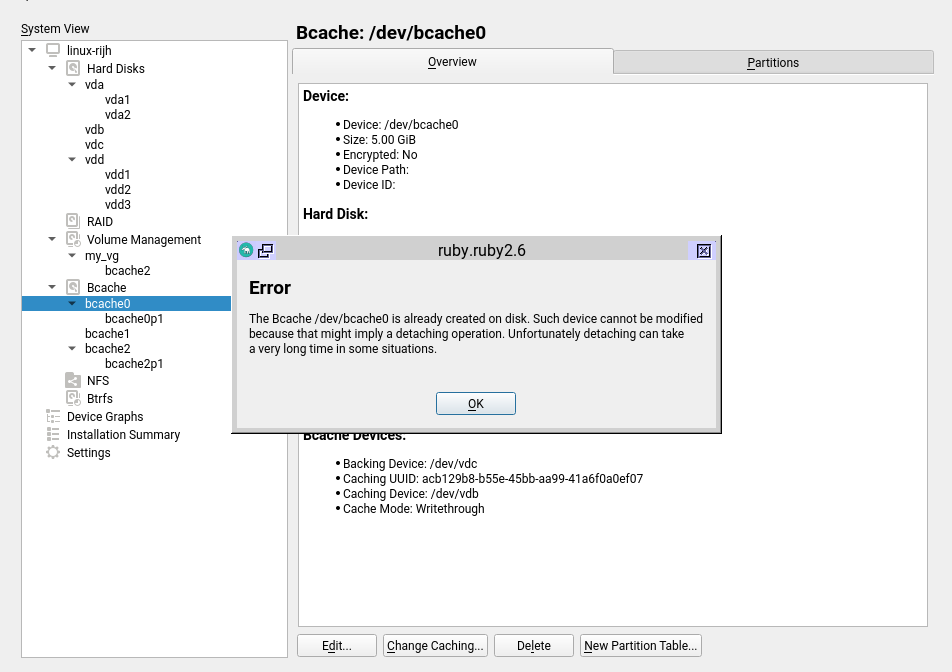 Of course the operation to delete a Bcache device offers the usual checks and information available in other parts of the YaST Partitioner, like shown in the following screenshot (this time using the look and feel of the SLE installer). 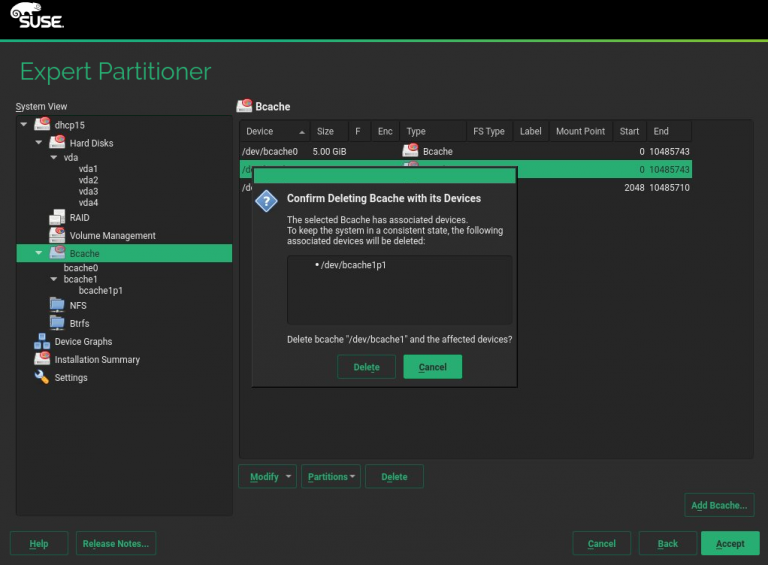 With all the functionality explained above, we could say the YaST Partitioner lowers the entry barrier enough for all the (open)SUSE users to begin enjoying the bells and whistles of the Bcache technology. Unfortunately, that’s not exactly true for all the hardware architectures supported by our beloved distributions.

Bcache is only considered stable and mature enough in x86-64 systems (i.e. x86 architecture of 64 bits). If you don’t know whether your computer fits into that description, then almost for sure it does. ? We have no evidence of anyone using Bcache successfully in 32 bits systems or in any ARM platform. Moreover, we know for sure the technology is unreliable in the PPC64LE and S390x architectures.

As a result, the YaST Partitioner will only present the “Bcache” section in the left tree when running in a x86-64 system, even in the highly unlikely case of an unsupported system in which a Bcache device is found. If that would even happen, YaST will alert the users about the dangers of using Bcache in such unsupported scenario and will urge them to use manual procedures to modify the existing setup. 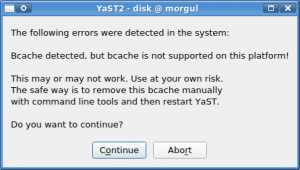 Obviously, as it always happens when a new technology is added to YaST, there is still a lot of room for improvement regarding the Bcache management in the Partitioner. But now it’s the turn for our users to test it and come with bug reports and ideas for further improvements and use cases and you can do so by beta testing openSUSE Leap 15.1 and SUSE Linux Enterprise 15 SP1. Profit!