For several years I have worked with customers who wanted to use artificial intelligence (AI) in their products (mostly embedded hardware) but ended up relying on the cloud. With the advances of embedded platforms in recent years, this dependency is gradually disappearing, giving rise to the so-called Edge AI.

Given my professional background and personal interest in this field, I wanted to create a state-of-the-art proof of concept platform with these requirements: 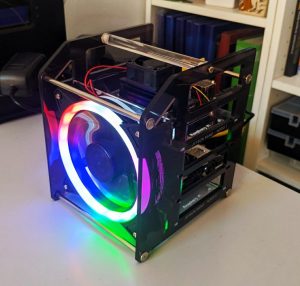 But first, what do we mean by edge AI? In edge AI, artificial intelligence algorithms are processed locally on a hardware device without external requirements. The algorithms use data on the device or local cluster. A device using edge AI can process data and make decisions independently without a connection.

This approach has some clear advantages over traditional cloud-based technologies, including: 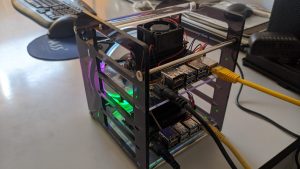 NVIDIA’s Jetson family of system on a chip (SoCs) are the most widely used boards in AI projects, robotics and GPU edge computing due to their ARM architecture with GPU and CUDA support. With Kubernetes technology (such as K3s), we can perform cluster training and inference, adding nodes as needed without external dependencies.

For this PoC, I chose two Jetson Nano boards from a previous robotics project. I implemented real-time object tracking and recognition algorithms using Tensorflow (so GPU support was mandatory). While two nodes may not be enough for a production environment in a traditional Kubernetes cluster, scalability for Nano boards is easy with minimal changes in the operating system. Also, cloning mSD cards and using SSD hard disks is easy with this setup.

At the architecture level, we’ll use K3s and standard tools such as Docker, ctr and kubectl.

Docker is the best-known runtime solution and is prevalent in development environments. However, Docker was deprecated as a container runtime for Kubernetes kubelets in December 2020, replaced by runtimes such as containerd. This solution has gained strength as the new industry standard, especially for production deployments (and is the default option in K3s, although you can change this).

NOTE – All scripts, configuration files and docker images used are available at :

To deploy the cluster, the operating system must be configured on all boards as follows:

Using the script setSwapMemorySize of JetsonHacks available from its repository.

Connect the J48 jumper (see the Power Guide section of the Jetson Nano Developer Kit User Guide). Power up the boards and then run:

In our example (just two boards):

Preinstalled in the L4T image. We can check it is working with:

Once we’ve made these changes, the operating systems will be ready for the next steps.

NOTE: If not otherwise specified, the commands will be executed on all Jetson boards.

Start by downloading the K3s and kubectl ARM64 binaries and copy them to /usr/local/bin with execution permissions:

NOTE: Refer to the Rancher K3s Server and Agent Configuration Reference guides for more info about the parameters used in the config.yaml files.

We can apply the same configuration used for the jetson2 node to the rest of the nodes in the cluster in case we use three or more boards.

K3s creates two important files that we will modify for our needs:

The above is the Kubernetes configuration file that we need for interacting with the cluster using the kubectl tool. We can use this file in any computer with kubectl to interact with the Kubernetes cluster by changing the server URL to http://192.168.0.34:6443 (our jetson1 address) and setting the KUBECONFIG environment path to this file before the kubectl invocation.

The above is the containerd configuration file. It’s generated at each K3s startup, so according to the K3s Advanced Options and Configuration Guide, we can copy it over a template file in the same path named config.toml.tmpl and use it instead. We need to modify this template file to add the nvidia-container-runtime support in containerd, adding the next lines at the end of the file and restarting K3s for the changes to take effect.

Use the same command for the rest of the boards in case you use three or more boards.

We can check the cluster status with kubectl with the usual commands:

We’ll use the deviceQuery NVIDIA test application (included in L4T) to check that we can access the GPU in the cluster. First, we’ll create a Docker image with the appropriate software, run it directly as Docker, then run it using containerd ctr and finally on the Kubernetes cluster itself.

Copy the demos where deviceQuery is located to the working directory where the Docker image will be created:

Then create the Dockerfile for the deviceQuery image as follows:

Build the image (change the name of the tag to whatever you want):

Finally, run the Docker container with the nVidia runtime support 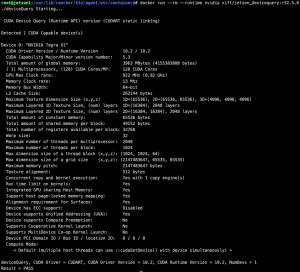 If everything went fine (Result = PASS), we can push the image to the Docker Hub repository for the next steps.

NOTE: We provide the created image here for your convenience.

Since K3s uses containerd as its runtime by default, we will use the ctr command line to test and deploy the deviceQuery image we pushed on containerd with this script: 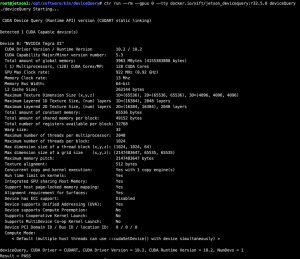 If everything went fine (Result = PASS, same as with Docker), we can move to the final test: running a pod on the K3s cluster.

For this final test, we will create a pod file for deploying on the cluster :

and then deploy on the cluster with kubectl:

We can check that everything went fine with the kubectl commands:

If everything went fine (Result = PASS), then we can force the deployment on the second node (jetson2) with the nodeName parameter:

and then deploy on the cluster with kubectl :

Check if everything went fine on jetson2:

If everything went fine, congratulations! You’ve got a K3s Kubernetes cluster with GPU support! (Yes, it’s a test image, but it’s still cool.)

Why stop with a test image? For the real thing, we need a fully TensorFlow GPU-supported image. TensorFlow is the most widely used machine learning software platform in production environments today. At the time of writing, an official Tensorflow Docker image for L4T r32.5 is not available, so we need to build it ourselves.

Running on Docker (as before):

and finally, check the TensorFlow GPU support with: 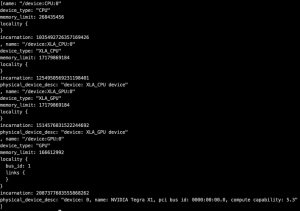 Deploying TensorFlow on the K3s cluster

We create a pod yaml file for deploying:

Run it same as before:

Check if it works:

If everything went fine, we can see that TensorFlow’s GPU detection was correct, as in the previous case.

So that’s it. We have a fully functional Edge AI Cluster with TensorFlow and GPU Support. Now we can use the xift/l4t-tensorflow:r32.5.0-tf2.3.1-py3 base image in any Dockerfile to deploy our Python code and run it with ease.

I would like to thank some very cool people of Rancher Labs (now SUSE): Raúl Sánchez, for his support in developing the idea and telling me about the K3s project. Caroline Kvitka and Mark Abrams for their help in reviewing the article. Thank you all for your help and support. Hope to see you around!

In a future post, I will provide an example with code of distributed training and inference in the cluster for an applied deep learning use case. There are even more interesting approaches at the architecture level, such as creating low-latency distributed clusters using Wireguard and doing hybrid approaches (training in cloud, deployment in edge).

Ready to give it a try? Start by downloading K3s.

Carlos is a multi-disciplinary technology consultant, entrepreneur and professor with more than 25 years of experience in GNU/Linux systems. He is the founder of xift.ai. In his professional career, he has carried out projects focused on open source technologies in all types of systems, embedded hardware, artificial intelligence and cybersecurity, and training in different technology schools.  Find him on Linkedin or GitHub. 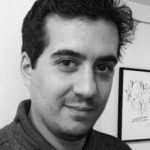