This article has been contributed by Felix Niederwanger, Software Engineer at SUSE.

When it comes to testing and virtual devices for testing purposes, the Linux kernel is always a surprisingly rich source. I’m at the moment working on setting up an openQA test for wpa_supplicant, probably the most widespread program for protected WiFi access. wpa_supplicant is also used in Android and is the part, that provides most of the higher level WiFi functionality. In order to verify that wpa_supplicant keeps working, I created an automated test that checks for every update if it still works. I used virtual WLAN interfaces and network namespace separation, so that the test is self-containing (i.e. it runs on a single virtual machine) and portable.

So, in this guide we are going to do the following:

You will need the following:

First install the requirements for this guide:

Set Up the WLAN Interfaces

The Linux kernel provides already everything we need via the mac80211_hwsim module. It’s a software simulator for IEEE 802.11 radio networks (commonly known as WLAN networks) written by Jouni Malinen. This kernel module is a piece of art – it creates an arbitrary amount of virtual WiFi interfaces that can communicate with each other if they are tuned to the same channel. Like this it’s possible to simulate various arbitrarily complex scenarios, ranging from a simple two device network (like we will be using) to complex setups with multiple clients connecting to various hotspots that run on different channels.

Set up the WiFi interfaces as follows:

The argument radios=2 defines how many virtual interfaces will be created and defaults to two devices. After successfully loading the kernel module,WLAN0 and WLAN1 are showing up, as shown in figure 1 below (execute ip link). The third interface that pops up is hwsim0. As stated before, WLAN interfaces can be tuned to channels and only can send and receive radio frames on that particular channel. hwsim0 is a virtual interface for debugging purposes, where you could listen to all radio frames on all channels. We won’t need it for this guide. 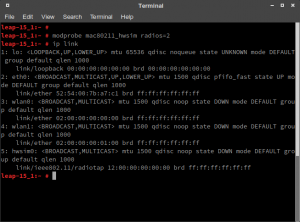 Isolating the Interfaces into Namespaces

After setting up the interfaces, all of them are visible and accessible from the system. We need to separate the two WiFi interfaces, so that we are able to test the connectivity between them. Let’s assume WLAN0 has the IP address 192.168.200.1 and WLAN1 has the IP address 102.168.200.101. If you now perform a simple ping on one of the two addresses, the system will perform the ping directly on that interface. In this configuration we cannot test if the packets would go over the virtual WiFi.

Luckily, network namespace separation allows us, to separate interfaces from each other. More specifically, it allows us to run a separate shell, where one of the WLAN interfaces will be. In that configuration, the system has no other possibility than to route packets over the WLAN interface to reach the other one. See the following figures for an illustration of the separation: 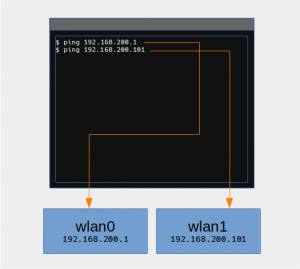 Without network namespace separation, both interfaces are visible 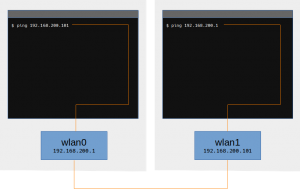 Interfaces in different network namespace don’t see each other. In this configuration, packets need to go over the virtual wifi to reach each other

One of the most convenient ways to assign network namespaces would be via ip link set. Unfortunately this doesn’t work with the virtual interfaces, thus we need to use the iw utility for that.

Assigning WLAN interfaces with the iw utility works on a process ID basis. So we first are going to launch our WiFi master shell in the new network namespace:

This will be our WiFi hotspot called wifi_master and has the pid 3282. Now, from our first shell, where WLAN0 is still visible, we are going to assign WLAN0 to the wifi_master namespace (replace 3282 with the pid of your wifi_master shell): 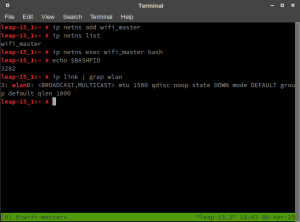 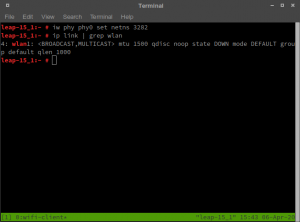 In the WiFi master shell we configure now the access point. The interface gets a static IP, dnsmasq will run as DHCP server and hostapd for the WiFi setup. First we set the static IP and setup dnsmasq as DHCP server (and run it as background job):

Next we setup dnsmasq as DHCP server and run it as background job:

For hostapd we use the following, very trivial configuration file hostapd.conf:

Then we run hostapd with the following command:

You should see something similar to the screen below: 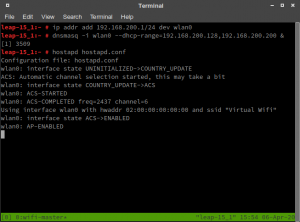 Congratulations!  The access point is up and running. The next step is to configure the WiFi client.

We use wpa_supplicant to connect to the WiFi access point. In the Wifi client shell, we first create the following very simple wpa_supplicant.conf file:

and connect to the access point via the following command:

You should now see the authentication in the WiFi master terminal: 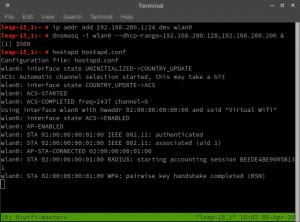 Then restart wicked to get the new IP address: 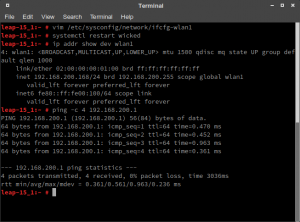 Congratulations! You have successfully set up your virtual WLAN network!

18,798 views
Meike ChabowskiMeike Chabowski works as Documentation Strategist at SUSE. Before joining the SUSE Documentation team, she was Product Marketing Manager for Enterprise Linux Servers at SUSE, with a focus on Linux for Mainframes, Linux in Retail, and High Performance Computing. Prior to joining SUSE more than 20 years ago, Meike held marketing positions with several IT companies like defacto and Siemens, and was working as Assistant Professor for Mass Media. Meike holds a Master of Arts in Science of Mass Media and Theatre, as well as a Master of Arts in Education from University of Erlangen-Nuremberg/ Germany, and in Italian Literature and Language from University of Parma/Italy.
Back