Virtual machines and containers are two of my favorite technologies. I
have always wondered about different ways they can work together. It has
become clear over time these two technologies compliment each other.
True there is overlap, but most people who are running containers today
run them on virtual machines, and for good reason. Virtual machines
provide the underlying computing resources and are typically managed by
the IT operations teams. Containers, on the other hand, are managed by
application developers and devops teams. I always thought this was a
good approach, and that for most use cases containers would reside
inside virtual machines. Then, a few months ago, a meeting with Jeremy
Huylebroeck of Orange Silicon Valley changed my thinking. Jeremy
mentioned it might make sense to run virtual machines inside
containers. At first the concept seemed odd. But the more I thought
about it the more I saw its merit. Interestingly numerous use cases for
VM containers started to appear in our conversations with Rancher
users. We have heard three common use cases for VM containers:

Because of all of these use cases, I started experimenting with running
KVM inside Docker containers, and I have come up with an experimental
system called RancherVM. RancherVM allows you to package KVM images
inside Docker images and manage VM containers using the familiar Docker
commands. A VM container looks and feels like a regular container. It
can be created from Dockerfile, distributed using DockerHub, managed
using docker command line, and networked together using links and port
bindings. Inside each VM container, however, is a virtual machine
instance. You can package any QEMU/KVM image as RancherVM containers.
RancherVM accomplishes all this without introducing any performance
overhead against running KVM without containers. 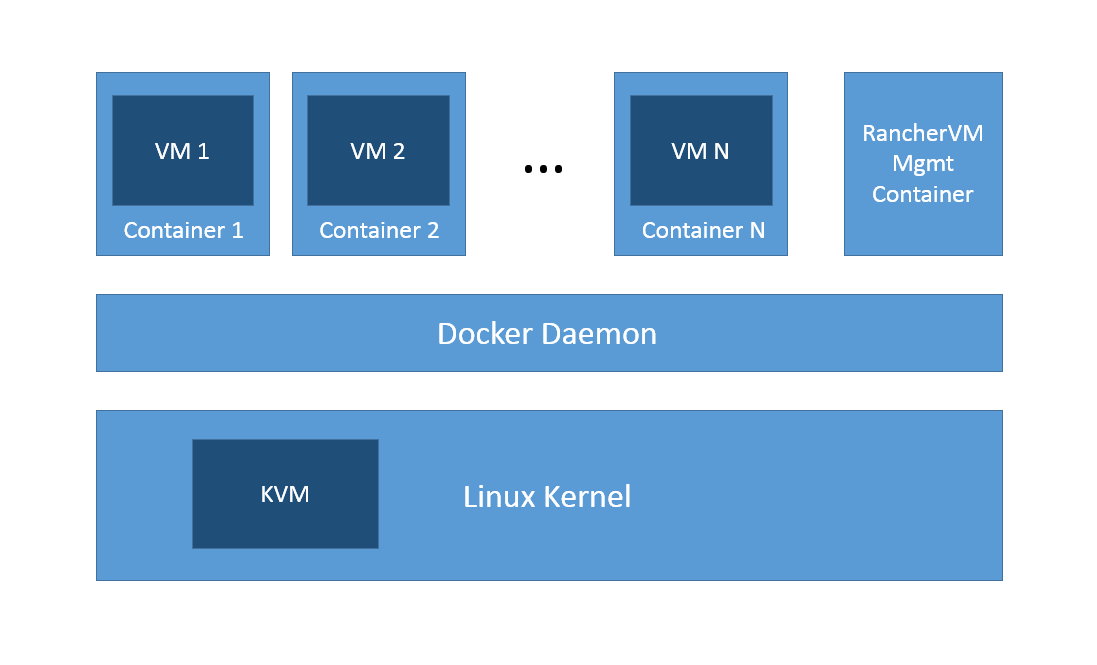 RancherVM additionally comes with a
management container that provides a web UI for managing virtual
machines. The following command starts the RancherVM management
container on a server where Docker and KVM are installed:

Once the management container is up, you can access a web-based virtual
machine management experience for VM containers at
https://<kvmhost>:8080/: 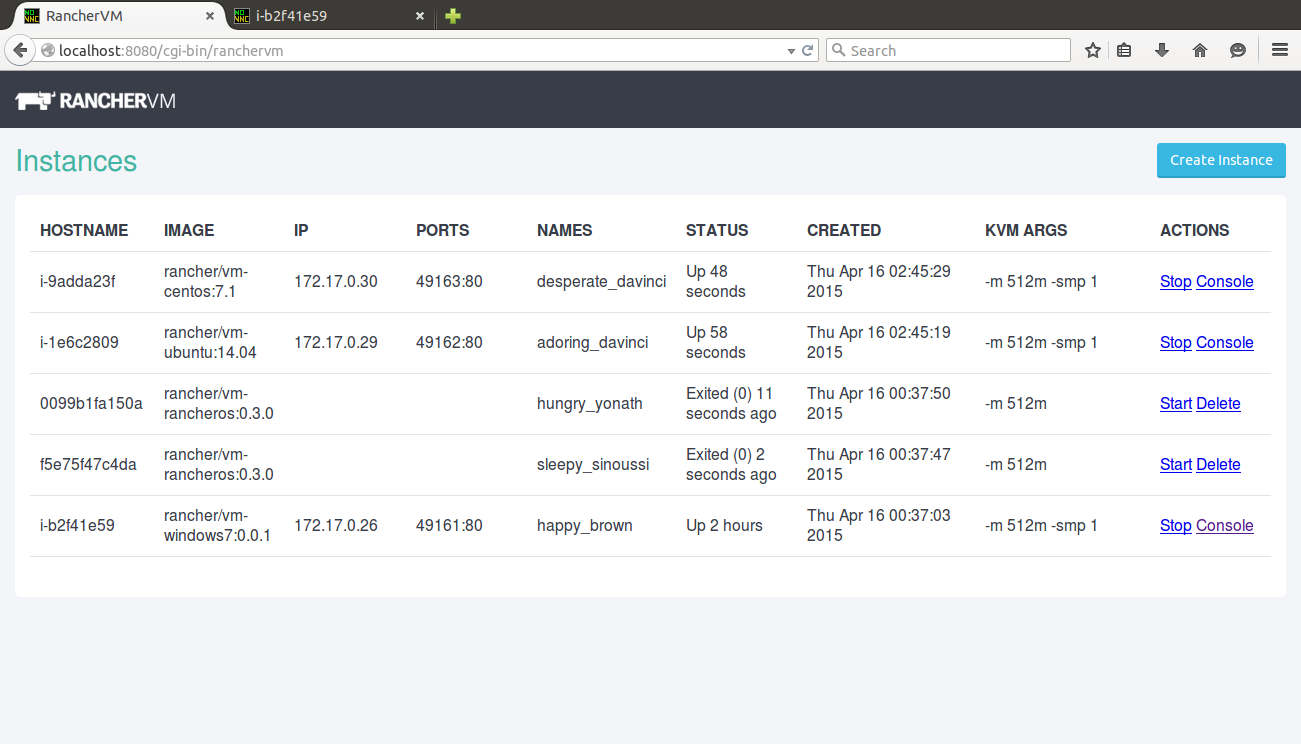 The web-based UI allows you to perform basic life-cycle
operations for VM containers and access the VNC console for virtual
machines. VNC console access comes in handy when you need to perform
operations that cannot be performed with remote SSH or RDP, such as
troubleshooting a Windows VM’s network configuration: 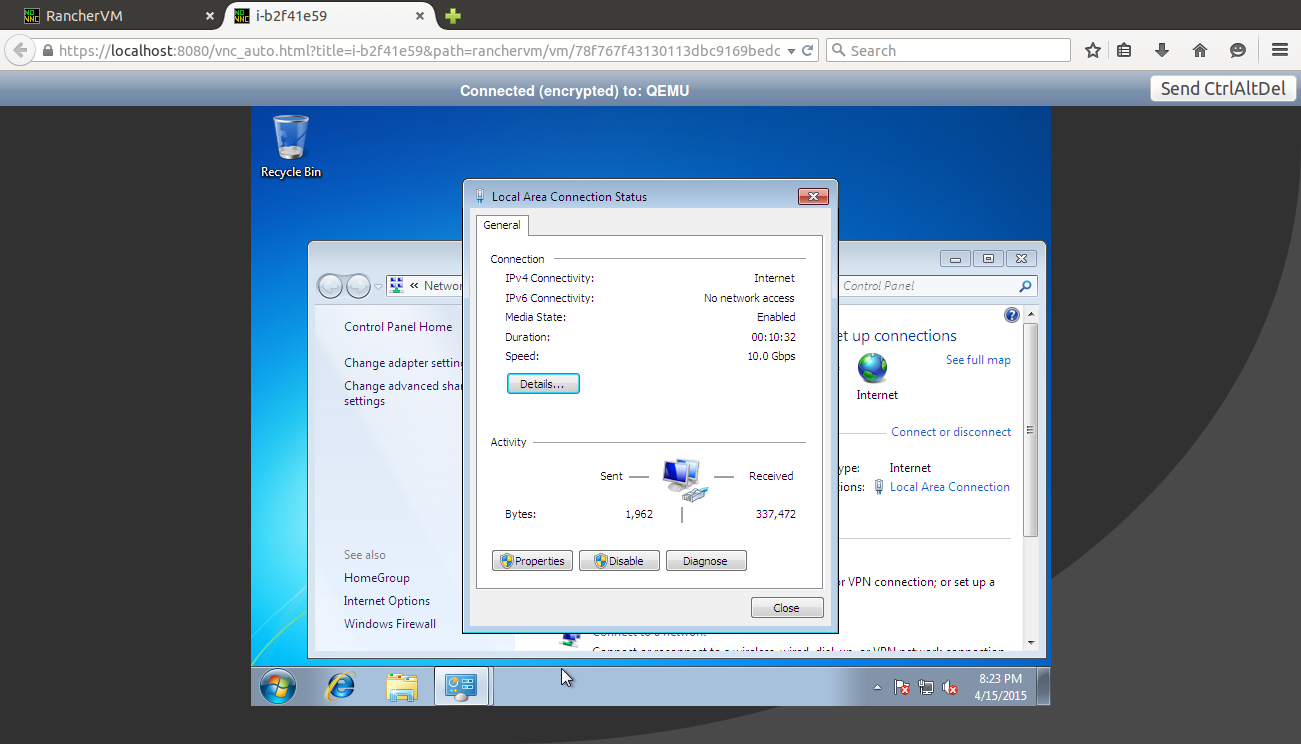 The web UI experience is attractive for users familiar
with VM management tools. A great benefit of RancherVM vs. traditional
VM management is we can now use the powerful Docker command lines to
manage virtual machines. The following command, for example, starts a
RancherOS VM:

Other than some command-line options required to setup a Docker
container to host KVM, this is just a normal docker command used to
instantiate a container image called rancher/vm-rancheros. Additional
docker commands like docker stop, docker ps, docker images, and
docker inspect all work as expected. The following video shows the
live experience of using RancherVM.

Today we’re making RancherVM available on
GitHub. I hope the initial release of
RancherVM gives you some ideas about building and using VM containers.
If you are interested, please check out the demo video, download the
software, and create some VM containers for yourself. If you have any
questions or issues, please file them as issues in GitHub and we’ll
respond as quickly as possible. On May 13th we will be hosting an online
meetup to demonstrate RancherVM, show a few use cases, and answer any
questions you might have. Please register to attend below.