Deploying a scalable Jenkins cluster with Docker and Rancher

Containerization brings several benefits to traditional CI platforms
where builds share hosts: build dependencies can be isolated,
applications can be tested against multiple environments (testing a Java
app against multiple versions of JVM), on-demand build environments can
be created with minimal stickiness to ensure test fidelity, Docker
Compose can be used to quickly bring up environments which mirror
development environments. Lastly, the inherent isolation offered by
Docker Compose-based stacks allow for concurrent builds — a sticking
point for traditional build environments with shared components.

One of the immediate benefits of containerization for CI is that we can
leverage tools such as Rancher to manage distributed build environments
across multiple hosts. In this article, we’re going to launch a
distributed Jenkins cluster with Rancher Compose. This work builds upon
the earlier
work** **by
one of the authors, and further streamlines the process of spinning up
and scaling a Jenkins stack. 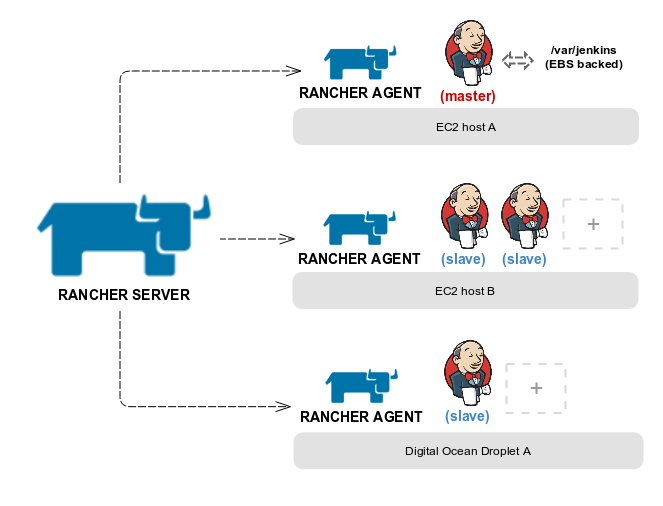 For our stack, we’re using Docker in Docker (DIND) images for
Jenkins master** and slave **running
on top of Rancher compute nodes launched in Amazon EC2. With DIND, each
Jenkins container runs a Docker daemon within itself. This allows us to
create build pipelines for dockerized applications with Jenkins.

First thing first, we need an EC2 instance to run the Rancher server. We
recommend going with Ubuntu 14.04
AMI for
it’s up-to-date kernel. Make sure[ to configure the security group for
the EC2 instance with access to port 22 (SSH) and 8080 (rancher web
interface):]

[Once the instance starts, the first order of business is
to ][install the
latest version of Docker by following the steps below (for Ubuntu
14.04):]

At this point you should be able to run docker without sudo.

[To install and run the latest version of Rancher (v0.32.0 at the time
of writing), follow the instructions in the docs.
In a few minutes your Rancher server should be up and ready to serve
requests on port
8080. ][If you
browse to http://YOUR_EC2_PUBLIC_IP:8080/ you will be greeted with a
welcome page and a notice asking you to configure
access. ][This is
an important step to prevent unauthorized access to your Rancher server.
Head over to the settings section and follow the instructions to
configure access
control. ] 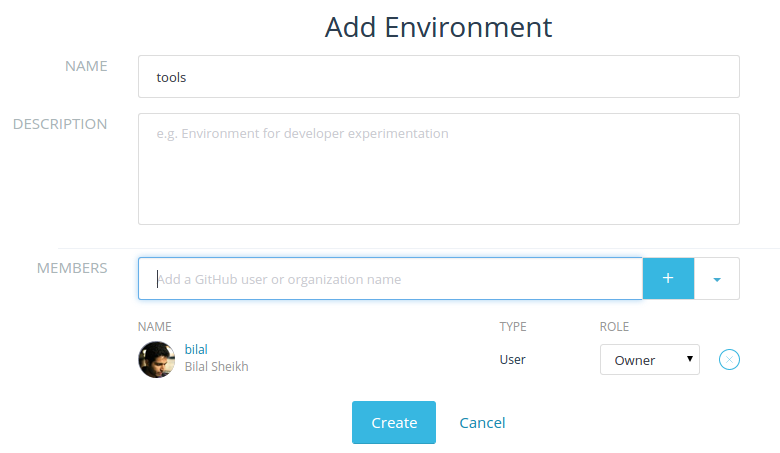 The next step is to tell Rancher about our hosts. For this tutorial,
we’ll launch all hosts with Ubuntu 14.04. Alternatively, you can add an
existing host using the custom host** **option
in Rancher. Just make sure that your hosts are running Docker 1.7.1+. 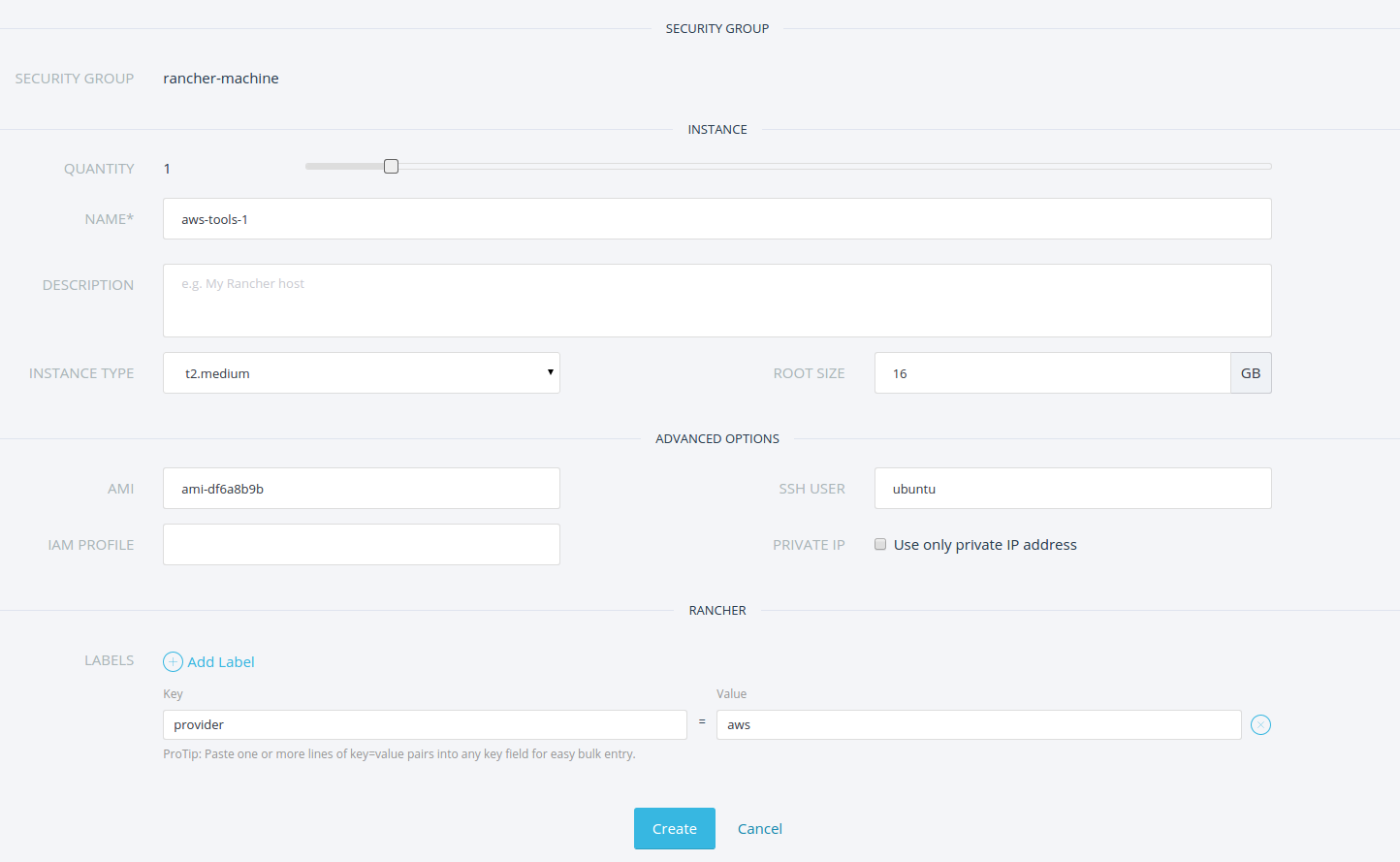 One of the hosts (JENKINS_MASTER_HOST) is going to run Jenkins master
and would need some additional configuration. First, we need to open up
access to port 8080 (default Jenkins port). You can do that by updating
the security group used by that instance fom the AWS console. In our
case, we updated the security group ( “rancher-machine” ) which was
created by rancher. Second, we need to attach an additional EBS-backed
volume to host Jenkins configuration. Make sure that you allocate enough
space for the volume, based on how large your build workspaces tend to
get. In addition, make sure the flag “delete on termination” is
unchecked. That way, the volume can be re-attached to another instance
and backed up easily:

As a last step, we need to install the rancher-compose CLI on our
development machine. To do that, head over to the applications tab in
Rancher and download the rancher compose CLI for your system. All you
need is to add the path-to-your-rancher-compose-CLI to
your *PATH *environment variable. 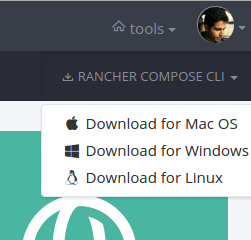 With that, our rancher server is ready and we can now launch and manage
containers with it.

Before we launch the Jenkins stack, we need to create a new Rancher API
key from API & Keys section under settings. Save the API key pair
some place safe as we’re going to need it with rancher-compose. For the
rest of the article, we refer to the API key pair as [RANCHR_API_KEY
and RANCHER_API_KEY_SECRET]. Next, open up a
terminal to fetch the latest version of Docker and Rancher Compose
templates from Github:

Before we can use these templates, let’s quickly update the
configuration. First, open up the Docker Compose file and update the
Jenkins username and password to a username and password of your choice.
Let’s call these credentials JENKINS_USER and JENKINS_PASSWORD.
These credentials will be used by the Jenkins slave to talk to master.
Second, update the host tag for slave and master to match the tags you
specified for your rancher compute hosts. Make sure that the
io.rancher.scheduler.affinity:host_label has a value of
“profile=jenkins” for jenkins-slave. Similarly, for
jenkins-master, make sure that the value
for io.rancher.scheduler.affinity:host_label is
“jenkins-master=true“. This will ensure that rancher containers are
only launched on the hosts that you want to limit them to. For example,
we are limiting our Jenkins master to only run on a host with an
attached EBS volume and access to port 8080.

[Now we’re all set to launch the Jenkins stack. Open up a terminal,
navigate to the “jenkins-rancher” directory and type:
]

[The output of the rancher compose command should look something
like:]

Next, verify that we have a new stack with three services:

Before we start the stack, let’s make sure that the services are
properly linked. Go to your stack’s settings and select “View Graph”
which should display the links between various services: 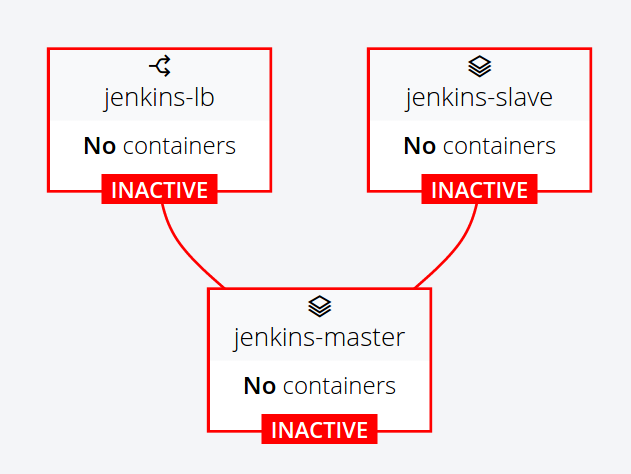 To start the stack and all of Jenkins services, we have a couple of
options; 1) select “Start Services” option from Rancher UI, or 2)
invoke rancher-compose CLI with the following command:

Once everything is running, find out the public IP of the host running
“jenkins-lb” from the Rancher UI and browse
to http://HOST_IP_OF_JENKINS_LB:8080/. If everything is configured
correctly, you should see the Jenkins landing page. At this point, both
your Jenkins master and slave(s) should be running; however, if you
check the logs for your Jenkins slave, you would see 404 errors where
the Jenkins slave is unable to connect to the Jenkins master. We need to
configure Jenkins to allow for slave connections.

In this section, we’ll go through the steps needed to configure and
secure our Jenkins stack. First, let’s create a Jenkins user with the
same credentials (JENKINS_USER and JENKINS_PASSWORD) that you
specified in your docker compose configuratio[n
file. ]Next, to enable security for Jenkins,
navigate to “manage Jenkins” and select “enable security” from the
security configuration. Make sure to specify 5000 as a fixed port for
“TCP port for JNLP slave agents“. Jenkins slaves communicate with the
master node on this port. 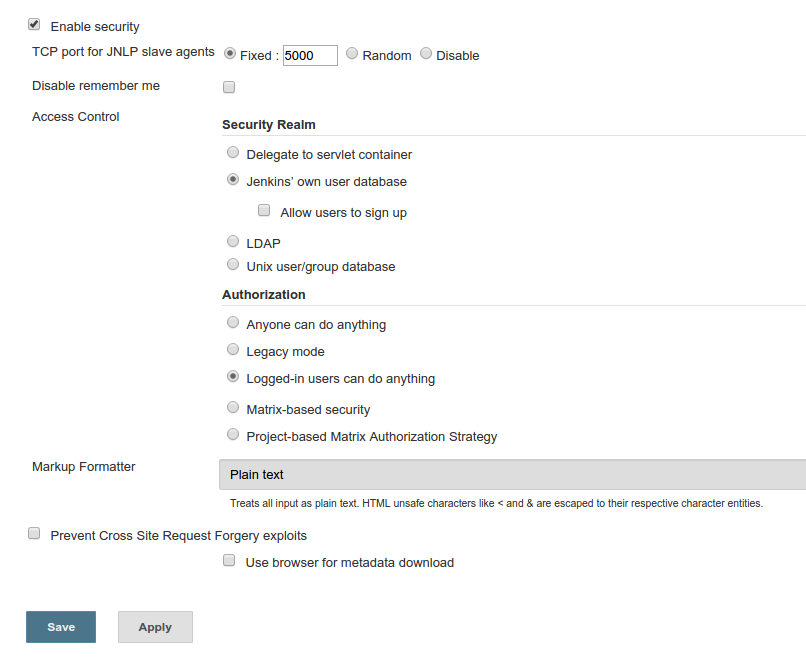 For the Jenkins slave to be able to connect to the master, we first need
to install the Swarm
plugin. The
plugin can be installed from the “manage plugins” section in Jenkins.
Once you have the swarm plugin installed, your Jenkins slave should show
up in the “Build Executor Status” tab: 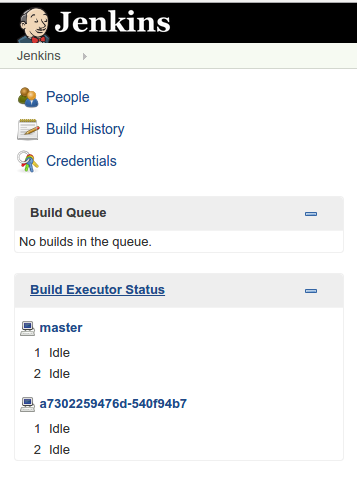 Finally, to complete the master-slave configuration, head over to
“manage Jenkins“. You should now see a notice about enabling master
security subsystem. Go ahead and enable the subsystem; it can be used to
control access between master and slaves:

Before moving on, let’s configure Jenkins to work with Git and Java
based projects. To configure git, simply install the git plugin. Then,
select “Configure” from “Manage Jenkins” settings and set up the JDK
and maven installers you want to use for your projects:

The steps above should be sufficient for building docker or maven based
Java projects. To test our new Jenkins stack, let’s create a docker
based job. Create a new “Freestyle Project” type job named
“docker-test” and add the following build step and select “execute
shell” with the following commands:

Save the job and run. In the console output, you should see the version
of docker running inside your Jenkins container and the output for other
docker commands in our job.

Note: The stop, rm and rmi commands used in the above shell script
stops and cleans up all containers and images. Each Jenkins job should
only touch it’s own containers, and therefore, we recommend deleting
this job after a successful test.

This is an area where Rancher really shines; it makes managing and
scaling Docker containers trivially easy. In this section we’ll show
you how to scale up and scale down the number of Jenkins slaves based on
your needs.

In our initial setup, we only had one EC2 host registered with Rancher
and all three services (Jenkins load balancer, Jenkins master and
Jenkins slave) running on the same host. It looks like:

We’re now going to register another host by following the instructions: 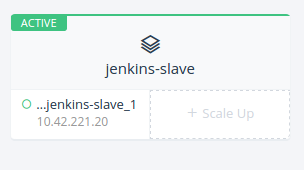 To launch more
Jenkins slaves, simply click “Scale up” from your “Jenkins” stack in
Rancher. That’s it! Rancher will immediately launch a new Jenkins slave
container. As soon as the slave container starts, it will connect with
Jenkins master and will show up in the list of build hosts: 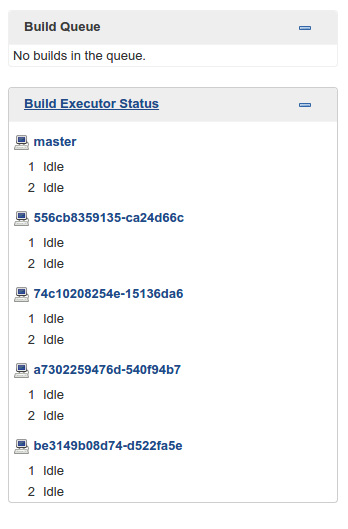 To scale down, select “edit” from jenkins-slave settings and adjust
the number of slaves to your liking:

In a few seconds you’ll see the change reflected in Jenkins list of
available build hosts. Behind the scenes, Rancher uses labels to
schedule containers on hosts. For more details on Rancher’s container
scheduling, we encourage you to check out the documentation.

In this article, we built Jenkins with Docker and Rancher. We deployed
up a multi-node Jenkins platform with Rancher Compose which can be
launched with a couple of commands and scaled as needed. Rancher’s
cross-node networking allows us to seamlessly scale the Jenkins cluster
on multiple nodes and potentially across multiple clouds with just a few
clicks. Another significant aspect of our Jenkins stack is the DIND
containers for Jenkins master and slave, which allows the Jenkins setup
to be readily used for dockerized and non dockerized applications.

In future articles, we’re going to use this Jenkins stack to create
build pipelines and highlight CI best practices for dockerized
applications. To learn more about managing applications through the
upgrade process, please join our next online meetup where we’ll dive
into the details of how to manage deployments and upgrades of
microservices with Docker and Rancher.

Bilal and Usman are server and infrastructure engineers, with
experience in building large scale distributed services on top of
various cloud platforms. You can read more of their work at
techtraits.com, or follow them on twitter
@mbsheikh and
@usman_ismail respectively.