Building the Micro Datacenter – Running Rancher on a Laptop 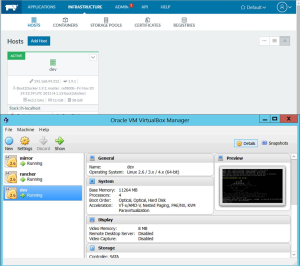 The ultimate goal
for a developer is to have their own micro data center, enabling them to test
their services in an exact live replica. However, the life of a
developer is full of compromises. Data is a reduced set or anonymized,
and companies aren’t quite ready to pay for a data center per
developmer. Today, i’ll provide an overview of how using Rancher and a
local machine can eliminate some of these compromises. Our goal is to
provide developers with an environment that is as representative as
possible of what will eventually be running in production, and we’re
going to use the magic of Docker and Rancher to do it. If you’ve
experienced any of the following:

Then hopefully I’ll be able to give you some ideas on how you
can address these.

Rancher and Docker can Help

Replicating a data center where all services run on bare metal doesn’t
translate to a laptop. Moving towards virtual machines helped in part
because users can run multiple services. The issues then become
physical. Either disk I/O makes it unusable, or there isn’t enough
memory to run a reasonable representation of production. This is where
Docker and Rancher can help. Docker containers start quickly and Rancher
helps with things like orchestration, networking and load balancing.
With this combination, it is now possible to get closer to running a
Data center on your laptop. This idea has become incredibly popular the
last six months as a number of very large organizations have started
providing a full docker management layer to developers to run locally.
Companies are making this investment because they are able to reap a
broad variety of benefits, including:

So how do we go about it? For the purpose of this blog, I’m going assume
Docker Toolbox is being used on a Mac or Windows. Downloads and
instructions on installing this can be found at
https://www.docker.com/products/docker-toolbox. First, let’s see what
it looks like: 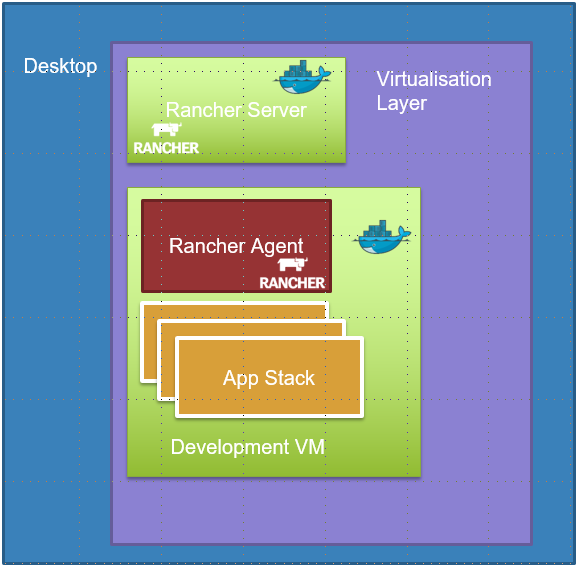 We are going to run a couple of Virtual Machines, one running just the
Rancher Server, another running as a host and running an application
stack. There are a couple of reasons for running in this configuration.
First, it’s more representative of live, and second, your application
won’t be able to starve Rancher of resources if there is an issue. So
first things first, let’s create a VirtualBox VM with 512GB and 8GB
disk. We’ll call this one Rancher:

We specify the URL for Docker v1.10.3 given that is what Rancher runs
on. Docker Toolbox is ideal for running Docker locally, but it does have
some challenges. One of these is that it uses DHCP, which is fine if you
don’t want to host a static service. However, to get around this ssh to
the Rancher machine, add the following lines to
/var/lib/boot2docker/profile:

At this point, you will have an error in docker-machine about the IP
address not matching. Run the following on the host OS to solve this:

This will then give our Rancher server a static IP address. You can then
run:

After a few minutes, you will have a Rancher Server running on port 8080
of the IP address you specified. Fixing the IP address of the Rancher
server is important as this is where any hosts agents that we deploy
will need to point to. After logging into the Rancher Server, go to
“add host” and generate the custom agent command. Copy it and keep
it as we are going to use it to add a host. Let’s now create a second
VM. Use the same command as above but adjust the name, memory and disk
space to suit your development requirements. Again once the VM has
started, you can go in and assign it a static IP address. Now, we come
across another limitation of the boot2docker VM; its data persistence.
If we add a Rancher agent to a host, it creates a /var/lib/rancher
folder and stores some information in it. Reboot the VM and this gets
destroyed. Thus, when the agent comes up again it thinks it’s a new
server and things go downhill from there. Luckily there is a workaround
to this. Before running the Rancher agent script log onto the host, run
the following:

This will create us a folder that persists between reboots. Now, on
every boot I’ll need to map this folder to /var/lib/rancher. So editing
/var/lib/boot2docker/profile again and add the following:

This will ensure that our agent state persists between reboots. Now ssh
to the machine and run the custom agent string that you obtained from
the Rancher server. Now you’ve got a Rancher Server, with a host all
running locally that is just waiting for you to deploy your application
stack to it. This is where it is up to you to take it to the next level.
But now, you have a functioning Rancher/Docker environment. You should
be able to pull from an external repository, script your application to
build locally or just run a catalog entry. While this way of developing
isn’t perfect, it is “good enough” for a large number of scenarios and
is certainly worth investigating as a way to improve development. In
ouronline meetupon
26^th^ May 2016, we are going to be extending from this blog by looking
at how this can look if you bring Jenkins and Git into the solution.
We’ll also be joined by a user who will share how this has impacted
their developer productivity, and enabled them to onboard new developers
much more quickly.