Announcing Rancher 2.0: the next major release of the container management platform

Update: Rancher 2.0 Tech Preview has since gone to GA. Read the announcement here.

We achieved another
significant milestone today at Rancher Labs. After months of hard work,
our engineering team released a technology preview of the Rancher
2.0 container management
platform.] Rancher 2.0 builds on the
tremendous momentum of market-leading Rancher 1.x container management
software. Since we shipped Rancher 1.0 in March 2016, Rancher server and
Rancher agent have been downloaded over 60 million times. There are now
over ten thousand live deployments of Rancher world-wide, and over 100
paying customers. Almost every day, happy open source users and
customers tell us how Rancher makes it easy for them to run Docker and
Kubernetes in production. I would like to thank our users who motivate
us to make Rancher software better, and I would especially like to thank
our customers who help fund the continuing development of Rancher
software!

When we initially built Kubernetes support into Rancher in 2015, the
biggest challenge we faced was how to install and setup Kubernetes
clusters. Off-the-shelf Kubernetes scripts and tools were difficult to
use and were unreliable. Rancher made it easy to setup a Kubernetes
cluster with a click of a button. Better yet, Rancher allowed you to set
up Kubernetes clusters on any infrastructure, including public cloud,
vSphere clusters, and bare metal servers. As a result, Rancher quickly
became one of the most popular ways to launch Kubernetes
clusters.

By the end of 2016, we started to
notice that the value of Kubernetes operations software was rapidly
diminishing. Two factors contributed to this trend. First, open source
tools such as Kubernetes Operations (kops) have reached a level of
maturity that made it easy for many organizations to operate Kubernetes
on AWS. Second, Kubernetes-as-a-Service started to gain popularity. A
Google Cloud customer, for example, no longer wanted to setup and
operate their own clusters. They could rely on Google, the inventor of
the technology, to operate Kubernetes for
them.

Kubernetes will be everywhere

The popularity of Kubernetes continues to rise in 2017. Its momentum is not slowing. We
have little doubt in the not so distant future, Kubernetes-as-a-Service
will be available from all infrastructure providers. When that happens,
Kubernetes will become the universal infrastructure standard. DevOps
team will no longer need to operate Kubernetes clusters themselves. The
only remaining challenge will be how to manage and utilize Kubernetes
clusters available from everywhere.

Rancher 2.0 is a complete container management platform built on
Kubernetes. The following figure illustrates the capabilities of
Rancher.

Unlike Rancher 1.0, Rancher server 2.0 includes an embedded Kubernetes master. This
means as soon as you start Rancher using, for example, the
command

You can create additional clusters using the same embedded Kubernetes master. We have built a custom
multi-tenant Kubernetes API server to minimize the resources required
for multiple Kubernetes clusters.

A single point of control and visibility across multiple clusters

Read the technical architecture paper for more details on the Rancher 2.0 enhancements. An IT administrator can create several
Kubernetes clusters using the embedded Kubernetes master or import
several existing Kubernetes clusters, and then use Rancher as a single
point of control and management for multiple
clusters.

Let us use a concrete example to illustrate how an IT administrator can leverage centralized RBAC and
authentication capabilities in Rancher. Imagine an enterprise IT
organization decides to use Google Container Engine (GKE) as the
standard platform to deploy containerized applications. GKE requires
every user to have a Google account, which is not the standard practice
in most enterprise organizations. With Rancher, the IT admin can import
a GKE clusters into Rancher using a single service account. Other users
can then be authenticated using the organization’s existing
ActiveDirectory credentials.

So many users have told us they really enjoyed using Rancher UI, and we
decided to make it even better in 2.0! We love working on the UI and we
love making it better. The 2.0 UI presents a simple container view by
default, making it very easy for anyone with rudimentary understanding
of containers to get started with Kubernetes. Advanced users still have
access to kubectl and Kubernetes dashboard. The application catalog
experience is further enhanced so that you can not only deploy
applications with a single click, you can now easily access and manage
applications after you deploy them. The 2.0 UI scales to many more
containers, services, and hosts. The 2.0 UI is highly responsive. If you
liked 1.x UI, you will like 2.0 UI even
better.

The following demo provides an overview of all the cool new features in
Rancher 2.0: 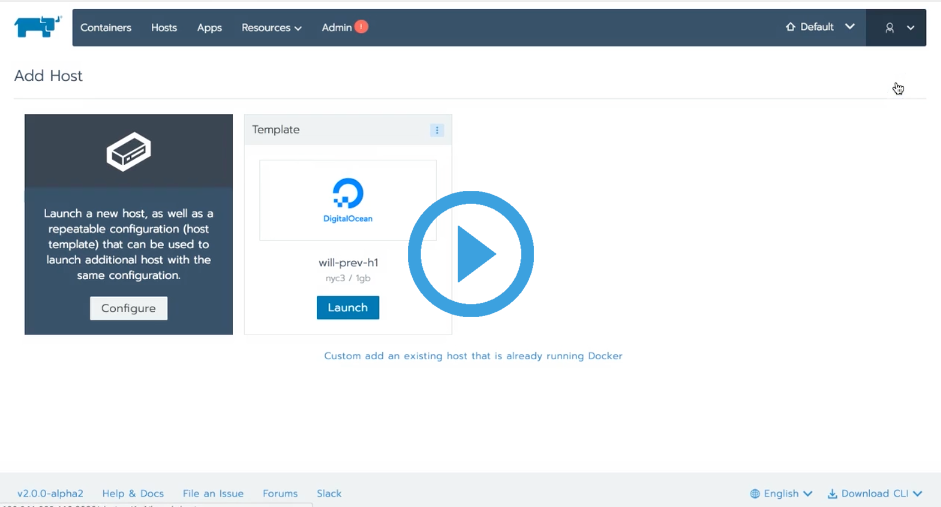 You can find details on how to quickly get started with Rancher 2.0 here.

More to come in the future

What we released today is an early technology preview. There’s still
lots of unfinished work. We are still busy fixing bugs and adding
features like HA deployment, RBAC and authentication, integrated CI/CD,
monitoring, and logging, etc. We will be shipping new releases
frequently. Stay tuned.

If you would like to learn more details about the technologies and features in Rancher
2.0, join us for our October online meetup. You can sign up
[here].