Distributed block storage is inherently simpler than other forms of distributed storage such as file systems. No matter how many volumes the system has, each volume can only be mounted by a single host. Because of this, it is conceivable that we should be able to partition a large block storage controller into a number of smaller storage controllers, as long as those volumes can still be built from a common pool of disks and we have the means to orchestrate the storage controllers so they work together coherently.

We created the Longhorn project to push this idea to the limit. We believe this approach is worth exploring as each controller only needs to serve one volume, simplifying the design of the storage controllers. Because the failure domain of the controller software is isolated to individual volumes, a controller crash will only impact one volume.

Longhorn leverages the tremendous body of knowledge and expertise developed in recent years on how to orchestrate a very large number of containers and virtual machines. For example, instead of building a highly-sophisticated controller that can scale to 100,000 volumes, Longhorn makes storage controllers simple and lightweight enough so that we can create 100,000 separate controllers. We can then leverage state-of-the-art orchestration systems like Swarm, Mesos, and Kubernetes to schedule these separate controllers, drawing resources from a shared set of disks as well as working together to form a resilient distributed block storage system.

The microservices-based design of Longhorn has some other benefits. Because each volume has its own controller, we can upgrade the controller and replica containers for each volume without causing a noticeable disruption in IO operations. Longhorn can create a long-running job to orchestrate the upgrade of all live volumes without disrupting the on-going operation of the system. To ensure that an upgrade does not cause unforeseen issues, Longhorn can choose to upgrade a small subset of the volumes and roll back to the old version if something goes wrong during the upgrade.

These practices are widely adopted in modern microservices-based applications, but they are not as common in storage systems. We hope Longhorn can help make the practices of microservices more common in the storage industry.

At a high level, Longhorn allows you to:

Longhorn is 100% open source software. You can download Longhorn on GitHub.

You can leverage the UI by connecting to http://<hostname_or_IP>:8080.
The following is the volume details screen: 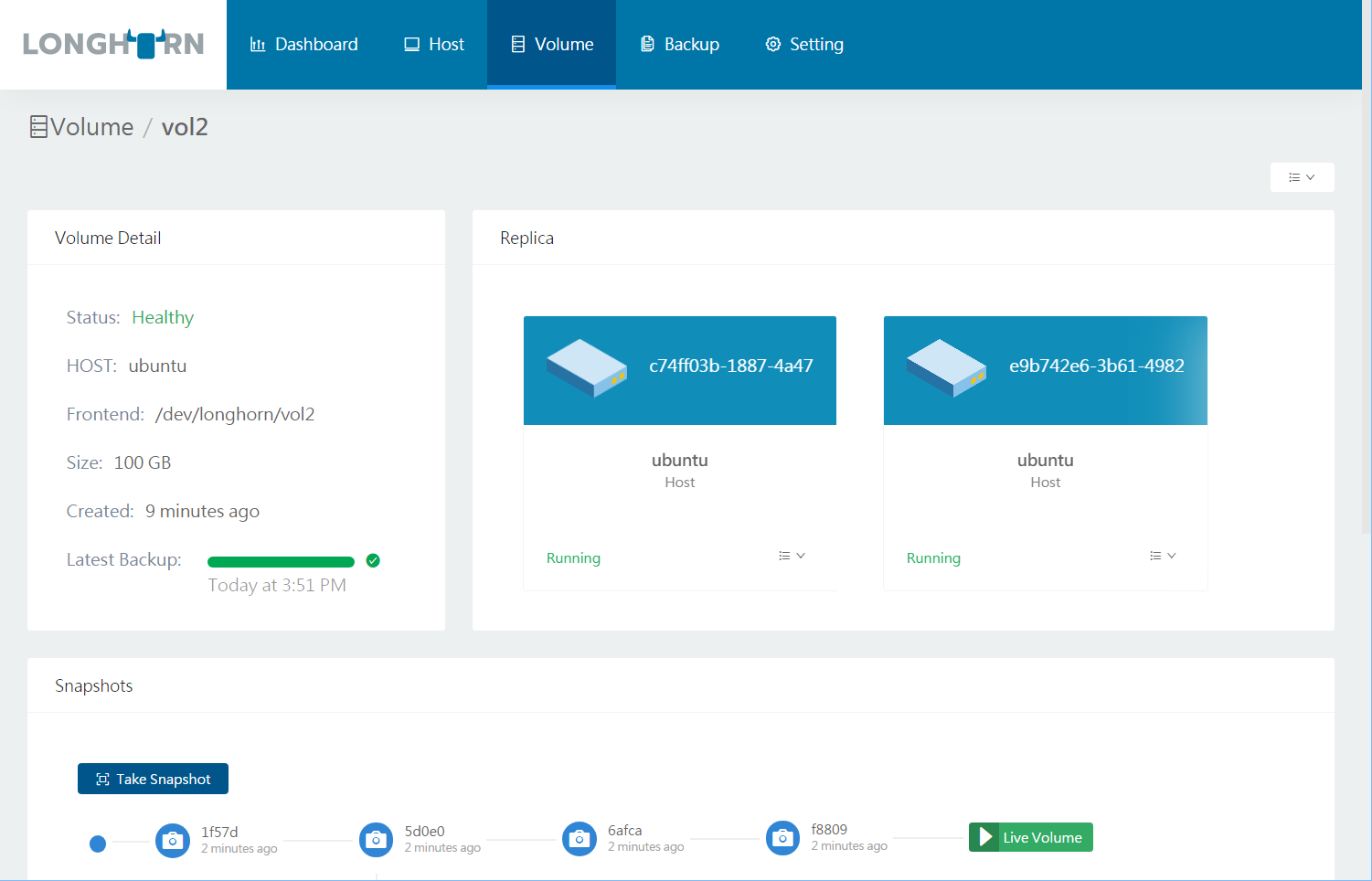 You can now create persistent Longhorn volumes from the Docker CLI:

The single-host Longhorn setup runs etcd and all volume replicas on the same host, and is therefore not suitable for production use. The Longhorn GitHub
page contains additional instructions for a production-grade multi-host setup using separate etcd servers, Docker swarm mode clusters, and a separate NFS server for storing backups.

Longhorn and Other Storage Systems

We wrote Longhorn as an experiment to build distributed block storage using containers and microservices. Longhorn is not designed to compete with or replace existing storage software and storage systems for the following reasons:

We built Longhorn to be simple and composable, and hope that it can serve as a testbed for ideas around building storage using containers and microservices. It is written entirely in Go (commonly referred to as golang), the language of choice for modern systems programming. The remainder of the blog post describes Longhorn in detail. It provides a preview of the system as it stands today — not every feature described has been implemented. However, we will continue the work to bring the vision of project Longhorn to reality.

Volume as a Microservice

The figure below illustrates the control path of Longhorn in the context
of Docker Swarm and Kubernetes. 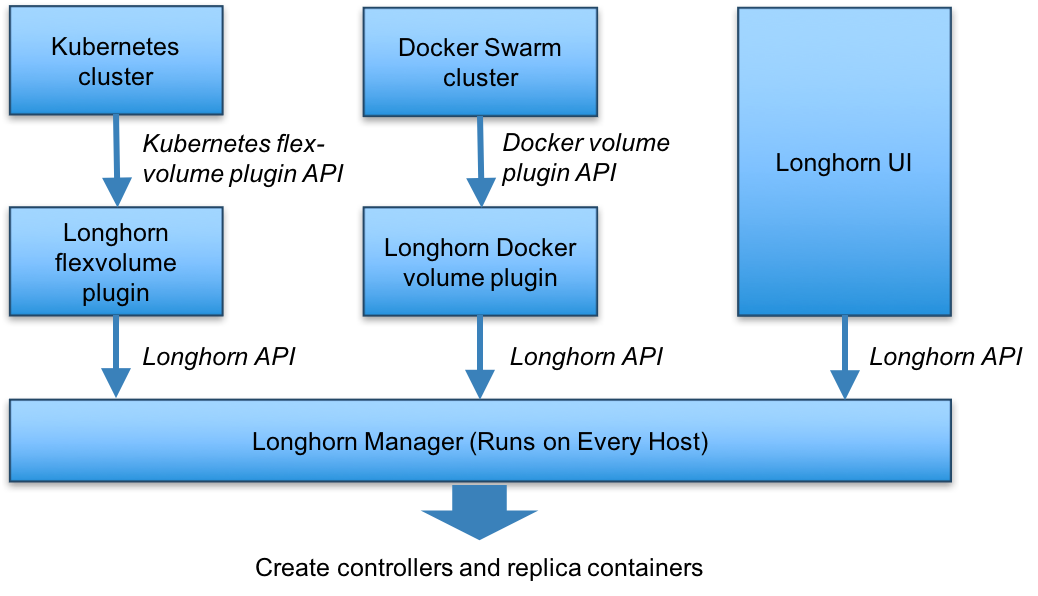 When the Longhorn manager is asked to create a volume, it creates a controller container on the host the volume is attached to as well as the hosts where the replicas will be placed. Replicas should be placed on separate hosts to ensure maximum availability.

For example, in a large-scale deployment with 100,000 Docker volumes each with two replicas, there will be 100,000 controller containers and 200,000 replica containers. In order to schedule, monitor, coordinate, and repair all these controllers and replicas a storage orchestration system is needed.

Longhorn replicas are built using Linux sparse files, which support thin provisioning. We currently do not maintain additional metadata to indicate which blocks are used. The block size is 4K. When you take a snapshot, you create a differencing disk. As the number of snapshots grows, the differencing disk chain could get quite long. To improve read performance, Longhorn therefore maintains a read index that records which differencing disk holds valid data for each 4K block.

In the following figure, the volume has eight blocks. The read index has eight entries and is filled up lazily as read operation takes place. A write operation resets the read index, causing it to point to the live data. 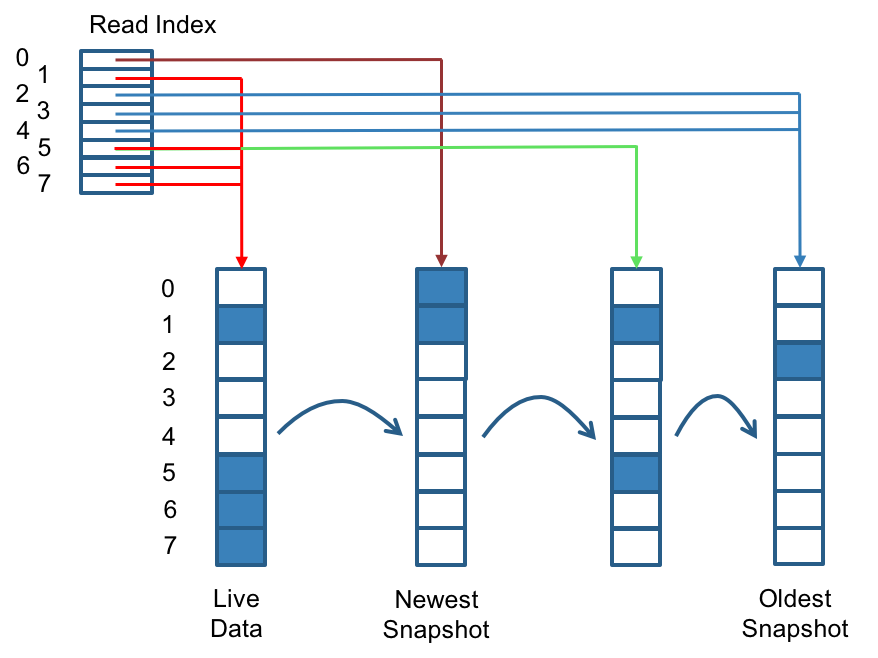 When the controller detects failures in one of its replicas, it marks the replica as being in an error state. The Longhorn volume manager is responsible for initiating and coordinating the process of rebuilding the faulty replica as follows:

It is not very efficient to rebuild replicas from scratch. We can improve rebuild performance by trying to reuse the sparse files left from the faulty replica.

I love how Amazon EBS works — every snapshot is automatically backed up to S3. Nothing is retained in primary storage. We have, however, decided to make Longhorn snapshots and backup slightly more flexible. Snapshot and backup operations are performed separately. EBS-style snapshots can be simulated by taking a snapshot, backing up the differences between this snapshot and the last snapshot, and deleting the last snapshot.

We also developed a recurring backup mechanism to help you perform such operations automatically. We achieve efficient incremental backups by detecting and transmitting the changed blocks between snapshots. This is a relatively easy task since each snapshot is a differencing file and only stores the changes from the last snapshot. To avoid storing a very large number of small blocks, we perform backup operations using 2MB blocks. That means that, if any 4K block in a 2MB boundary is changed, we will have to backup the entire 2MB block. We feel this offers the right balance between manageability and efficiency.

In the following figure, we have backed up both snap2 and snap3. Each backup maintains its own set of 2MB blocks, and the two backups share one green block and one blue block. Each 2MB block is backed up only once. When we delete a backup from secondary storage, we of course cannot delete all the blocks it uses. Instead we perform garbage collection periodically to clean up unused blocks from secondary storage. 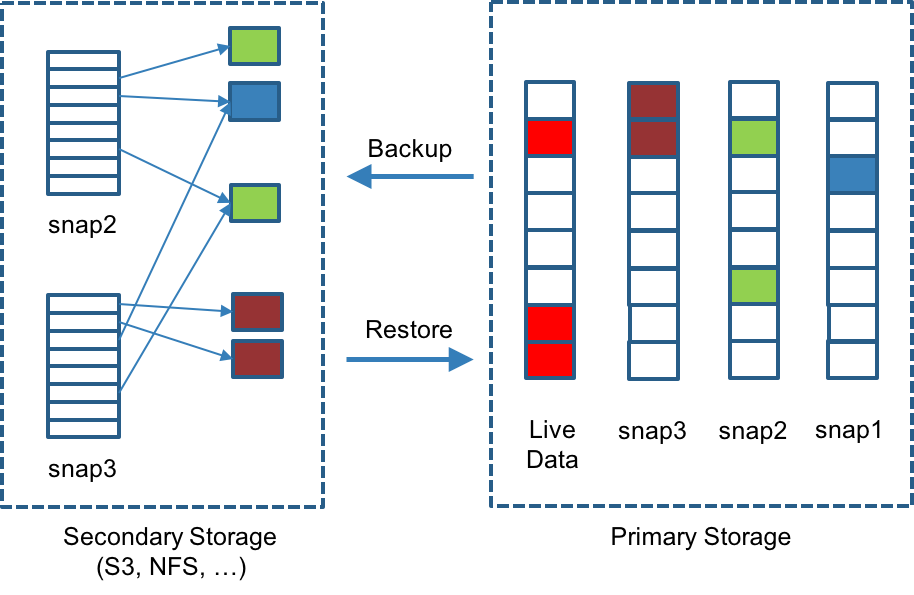 The Longhorn volume manager performs the task of scheduling replicas to nodes. We can tweak the scheduling algorithm to place the controller and replica in different ways. The controller is always placed on hosts where the volume is attached. The replicas, on the other hand, can either go on the same set of compute servers running the controller or on a dedicated set of storage servers. The former constitutes a hyper-converged deployment model whereas the latter constitutes a dedicated storage server model.

What We Have Accomplished and Unfinished Tasks

A useful set of Longhorn features are working today. You can:

We will continue to improve the codebase to add the following features in the coming weeks and months:

It takes a lot of people and effort to build a storage system. The initial ideas for Project Longhorn was formed during a discussion Darren Shepherd and I had in 2014 when we started Rancher Labs. I was very impressed with the work Sage Weil did to build Ceph, and felt we could perhaps decompose a sophisticated storage system like Ceph into a set of simple microservices built using containers. We decided to focus on distributed block storage since it is easier to build than a distributed file system.

We hired a small team of engineers, initially consisting of Oleg Smolsky and Kirill Pavlov, and later joined by Jimeng Liu, to build a set of C++ components that constitute the initial controller and replica logic. Darren Shepherd and Craig Jellick built the initial orchestration logic for volume life cycle management and replica rebuild using the Rancher platform’s orchestration engine (Cattle). Sheng Yang built the Convoy Docker volume driver and Linux device integration using the Linux TCMU driver. We were also able to leverage Sheng Yang’s work on incremental backup of device mapper volumes in Convoy. Sangeetha Hariharan led the QA effort for the project as we attempted to integrate the initial system and make everything work.

Building that initial system turned out to be a great learning experience. About a year ago, we proceeded with a rewrite. Darren simplified the core controller and replica logic and rewrote the Longhorn core components in Go. TCMU required too many kernel patches. Though we were able to upstream the required kernel patches, we missed the merge window for popular Linux distributions like Ubuntu 16.04 and CentOS 7.x. As a result, off-the-shelf Linux distros do not contain our TCMU patches.

Sheng Yang, who ended up owning the Longhorn project, rewrote the frontend using Open-iSCSI and tgt. Open-iSCSI is a standard Linux utility available on all Linux server distributions. It comes pre-installed on Ubuntu 16.04. Tgt is a user-level program we can bundle into containers and distribute with Longhorn. Ivan Mikushin rewrote the Longhorn orchestration logic from Rancher orchestration to standalone Go code and, as we later found out, following a pattern similar to the CoreOS etcd operator. Logan Zhang and Aaron Wang developed the Longhorn UI. Several outside teams have collaborated with us during the project. Shenzhen Cloudsoar Networks, Inc. funded some of the development efforts. The CoreOS Torus project wrote a Go TCMU
driver. OpenEBS incorporated Longhorn into their product.

Check Out Our Code

If you are interested in learning more about the code and design of the project, check out the source code and docs. You can file issues on GitHub
or visit the Longhorn forum.