Introduction to Kubernetes Monitoring | SUSE Communities
< Back to Blog

With over 40,000 stars on Github, more than 70,000 commits, and with major contributors like Google and Redhat, Kubernetes has rapidly taken over the container ecosystem to become the true leader of container orchestration platforms. Despite Kubernetes’s popularity, monitoring Kubernetes presents many challenges. To understand these challenges and their solutions, it’s best to start with a review of how Kubernetes works.

Understanding Kubernetes and Its Abstractions

At the infrastructure level, a Kubernetes cluster is a set of physical or virtual machines acting in a specific role. The machines acting in the role of Master act as the brain of all operations and are charged with orchestrating containers that run on all of the Nodes. 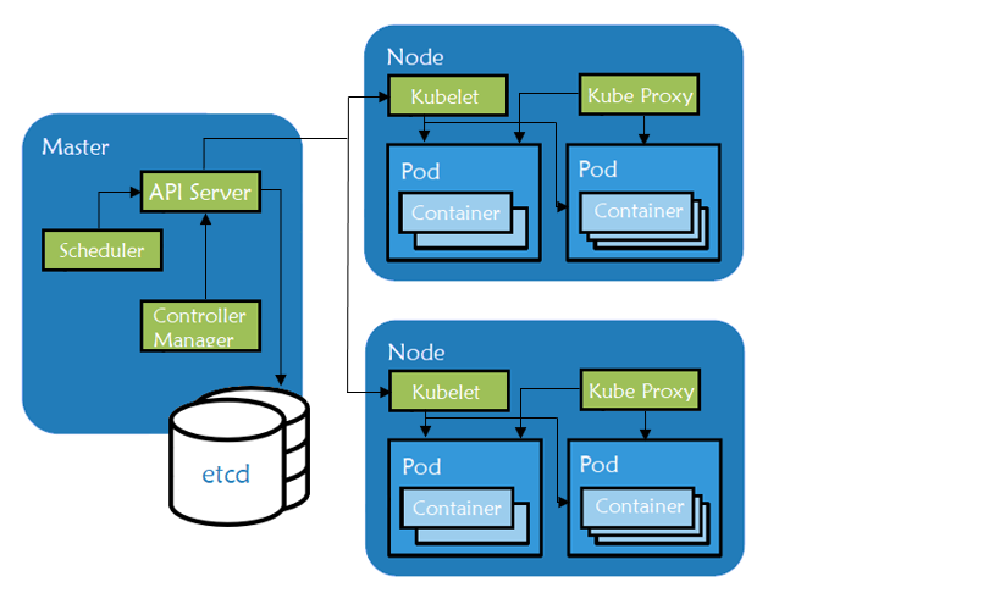 From a logical perspective, a Kubernetes deployment is comprised of various components, each serving a specific purpose within the cluster.

Multiple services and namespaces can be spread across the infrastructure. As seen above, each of the services are made of pods, which can have one or more containers inside. With so many moving parts, monitoring even a small Kubernetes cluster can present a challenge. Monitoring Kubernetes requires a deep understanding of the application architecture and functionality in order to design and manage an effective solution.

Kubernetes ships with tools for monitoring the cluster:

Kubernetes has tremendous capability for automatically recovering from failures. It can restart pods if a process crashes, and it will redistribute pods if a node fails. However, for all of its power, there are times when it cannot fix a problem. In order to detect those situations, we need additional monitoring.

All clusters should have monitoring of the underlying server components because problems at the server level will show up in the workloads.

All of the components that make up a Kubernetes Master or Worker, including etcd, are critical to the health of your applications. If any of these fail, the monitoring system needs to detect the failure and either fix it or send an alert.

The final layer is that of the Kubernetes resources themselves. Kubernetes exposes metrics about the resources, and we can also monitor the applications directly. Although we can trust that Kubernetes will work to maintain the desired state, if it’s unable to do so, we need a way for a human to intervene and fix the issue.

In addition to managing Kubernetes clusters running anywhere, on any provider, Rancher will also monitor the resources running inside of those clusters and send alerts when they exceed defined thresholds.

There are already dozens of tutorials on how to deploy Rancher. If you don’t already have a cluster running, pause here and visit our quickstart guide to spin one up. When it’s running, return here to continue with monitoring.

The cluster overview gives you an idea of the resources in use and the state of the Kubernetes components. In our case, we’re using 78% of the CPU, 26% of the RAM and 11% of the maximum number of pods we can run within the cluster. 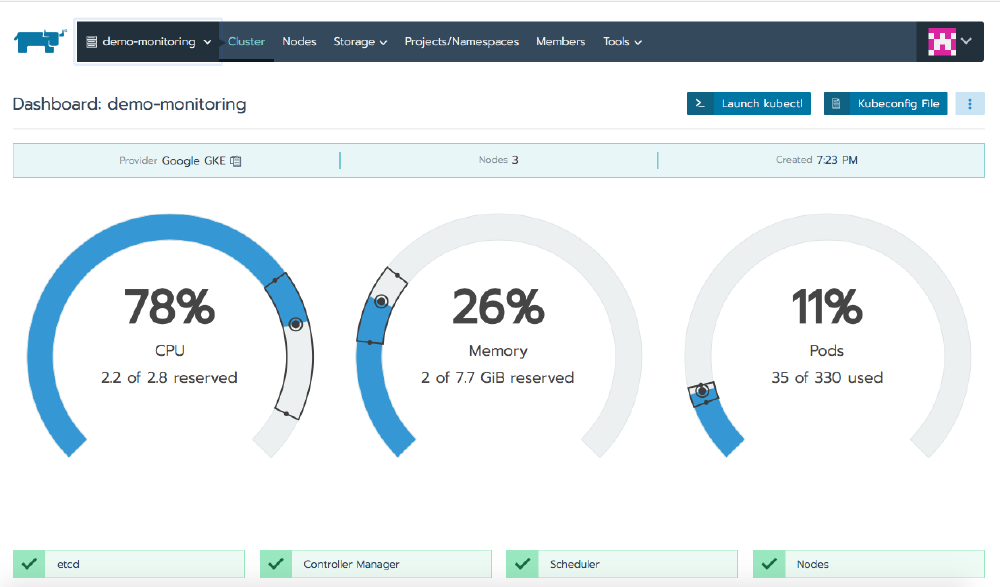 When you click on the Nodes tab, you’ll see additional information about each of the nodes running in the cluster, and when you click on a particular node, the view focuses on the health of that one member. 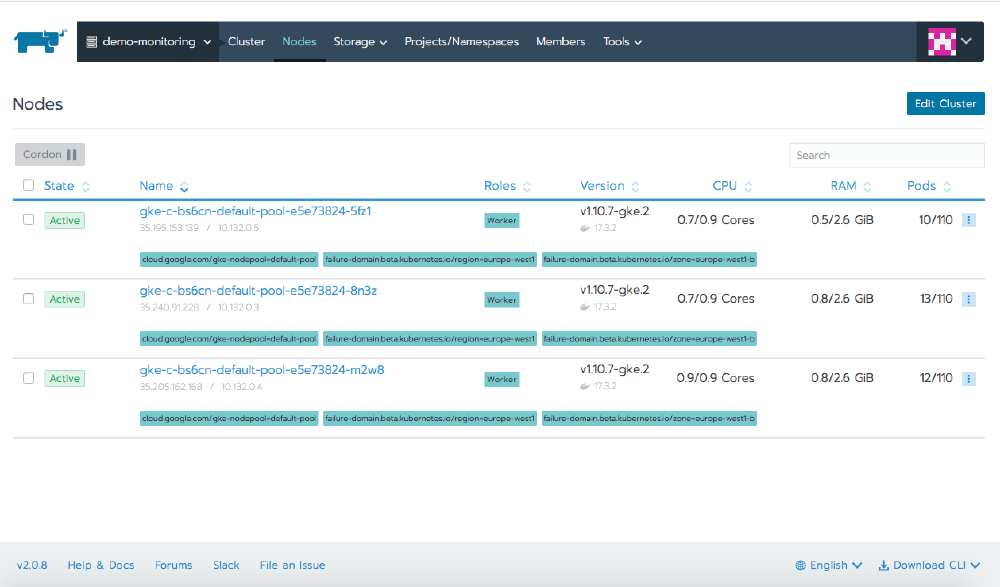 The Workloads tab shows the pods running in your cluster. If you don’t have anything running, launch a workload running the nginx image and scale it up to multiple replicas.

When you select the name of the workload, Rancher presents a page that shows information about it. At the top of this page it will show you each of the pods, which node they’re on, their IP address, and their state. Clicking on any individual pod takes us one level deeper, where now we see detailed information about only that pod. The hamburger menu icon in the top right corner lets us interact with the pod, and through this we can execute a shell, view the logs, or delete the pod. 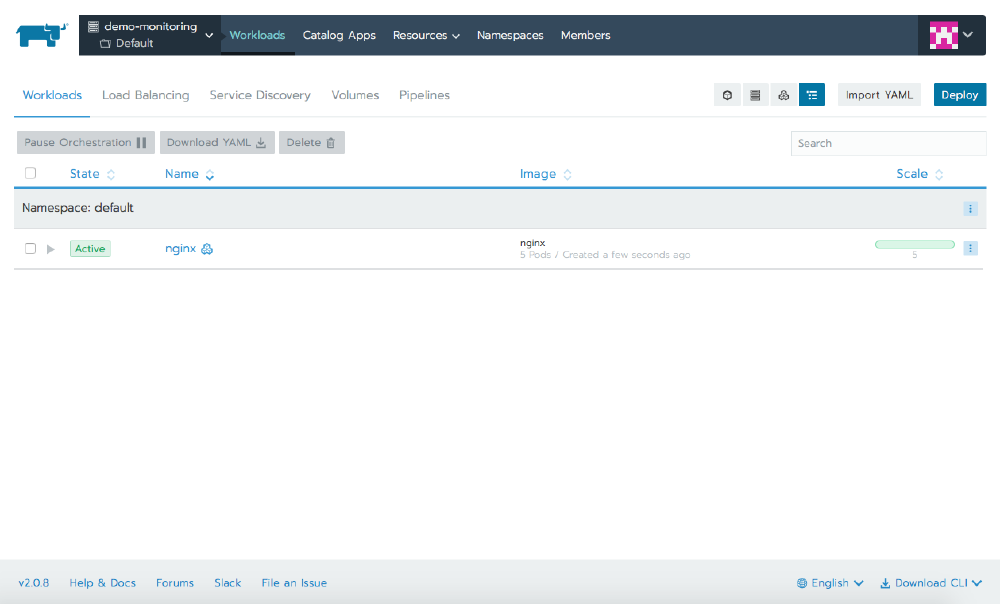 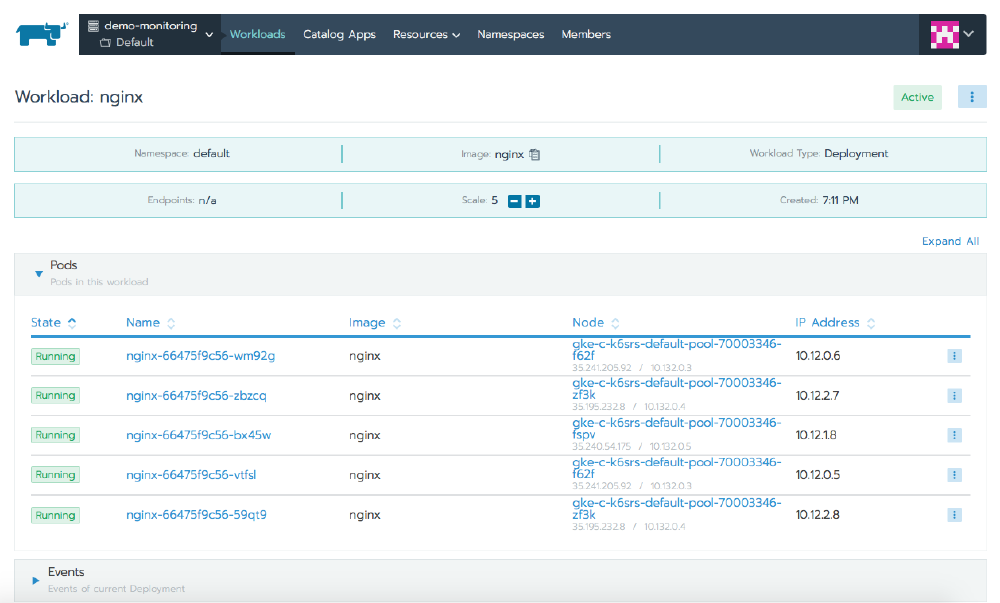 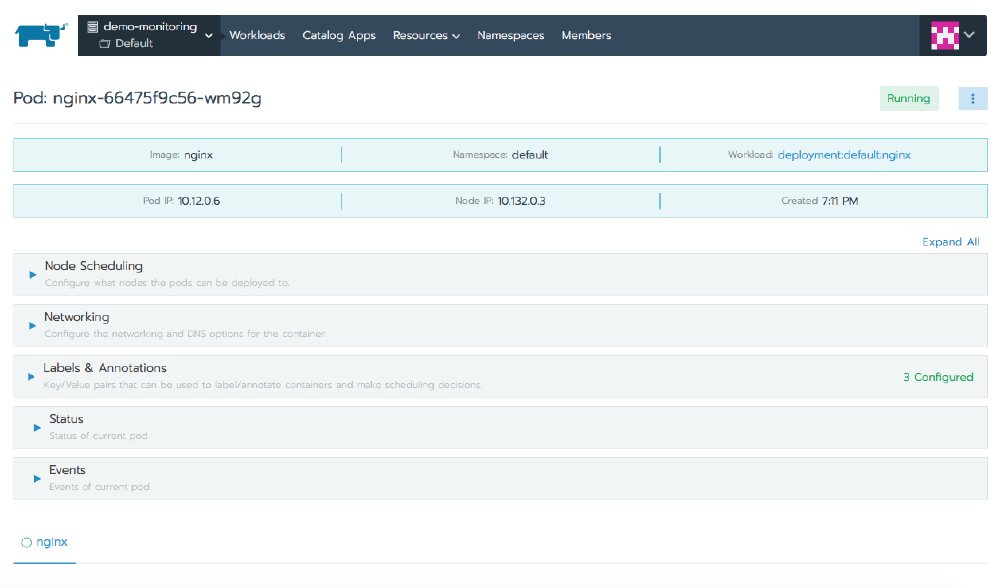 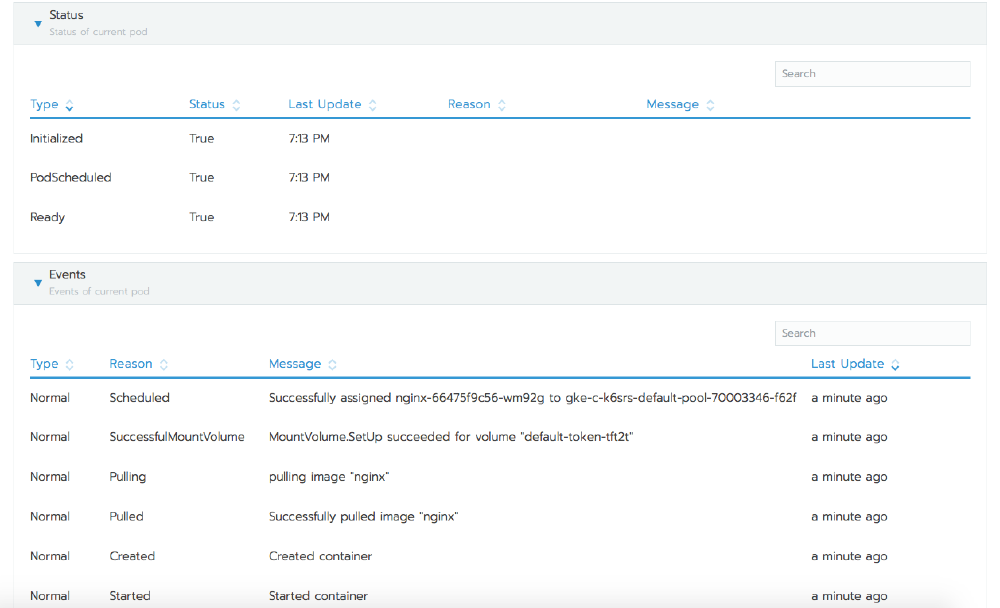 Other tabs show information about different Kubernetes resources, including Load Balancing for ingress or services of type LoadBalancer, Service Discovery for other service types, and Volumes for information about any volumes configured in the cluster. 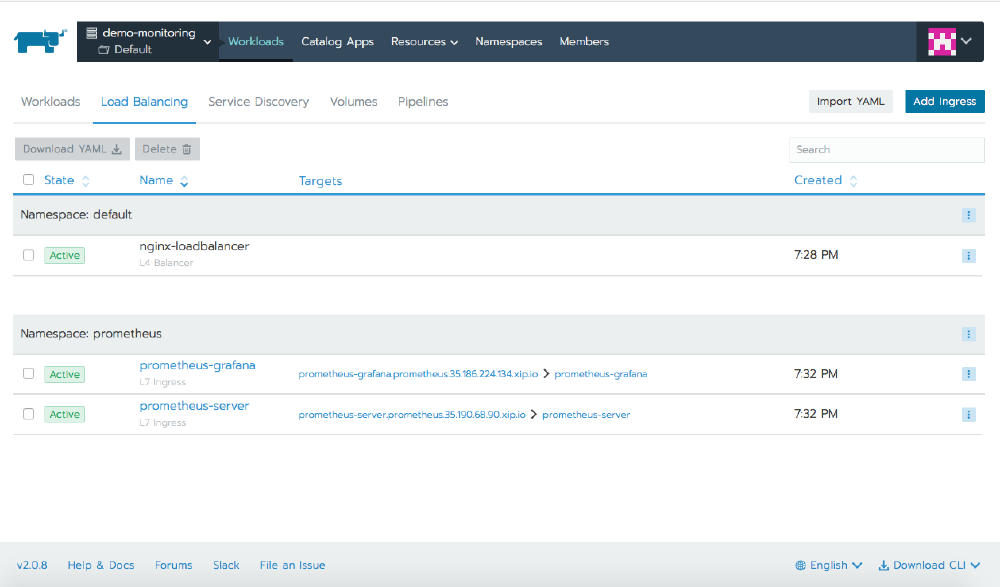 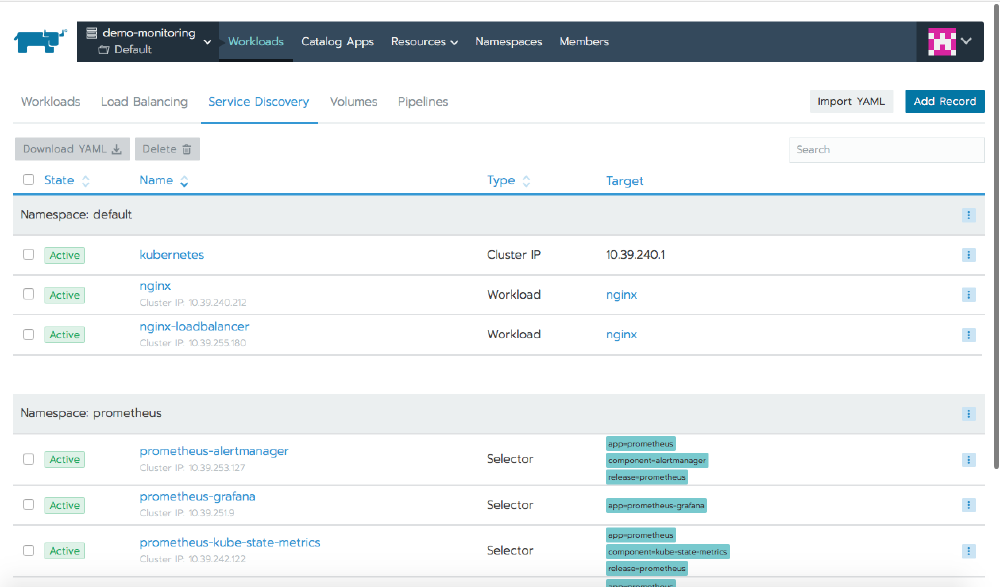 Use Prometheus for Monitoring

The information visible in the Rancher UI is useful for troubleshooting, but it’s not the best way to actively track the state of the cluster throughout every moment of its life. For that we’ll use Prometheus, a sibling project of Kubernetes under the care and guidance of the Cloud Native Computing Foundation. We’ll also use Grafana, a tool for converting time-series data into beautiful graphs and dashboards.

Prometheus is an open-source application for monitoring systems and generating alerts. It can monitor almost anything, from servers to applications, databases, or even a single process. In the Prometheus lexicon it monitors targets, and each unit of a target is called a metric. The act of retrieving information about a target is known as scraping. Prometheus will scrape targets at designated intervals and store the information in a time-series database. Prometheus has its own scripting language called PromQL.

Grafana is also open source and runs as a web application. Although frequently used with Prometheus, it also supports backend datastores such as InfluxDB, Graphite, Elasticsearch, and others. Grafana makes it easy to create graphs and assemble those graphs into dashboards. Those dashboards can be protected by a strong authentication and authorization layer, and they can also be shared with others without giving them access to the server itself. Grafana makes heavy use of JSON for its object definitions, which makes its graphs and dashboards extremely portable and easy to use with version control.

Rancher includes both Prometheus and Grafana in its application catalog, so we can deploy them with a few clicks.

Visit the Catalog Apps page for your cluster and search for Prometheus. Installing it will also install Grafana and AlertManager. For this article it’s sufficient to leave everything at its defaults, but for a production deployment, read the information under Detailed Descriptions to see just how much configuration is available within the chart. 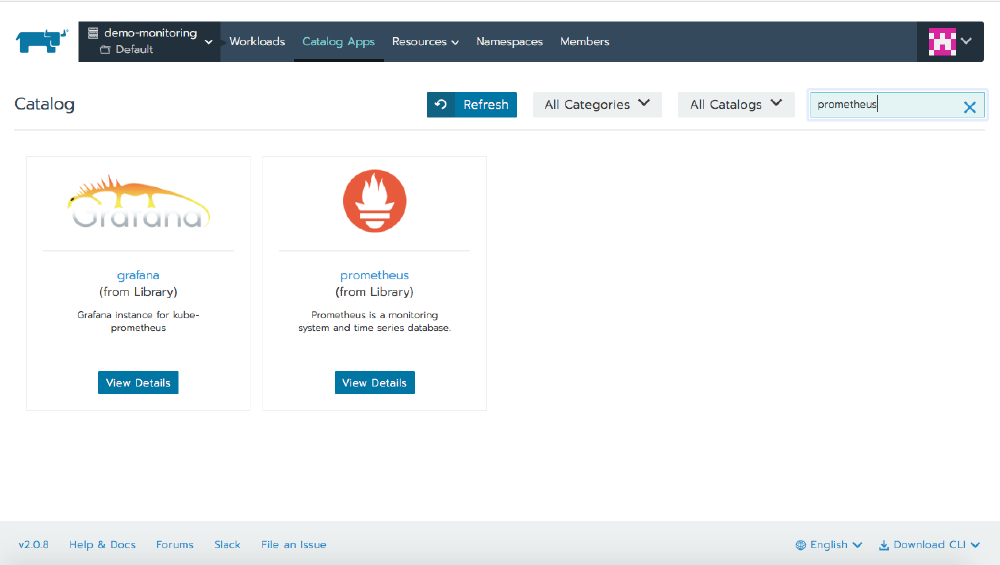 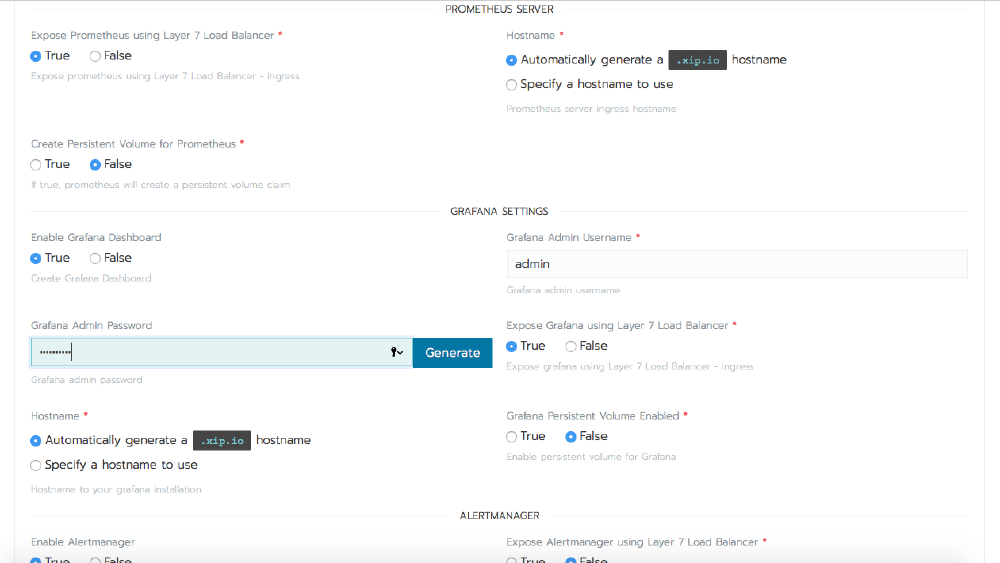 When you click Launch, Rancher will deploy the applications into your cluster, and after a few minutes, you’ll see all of the workloads in an Active state under the prometheus namespace. 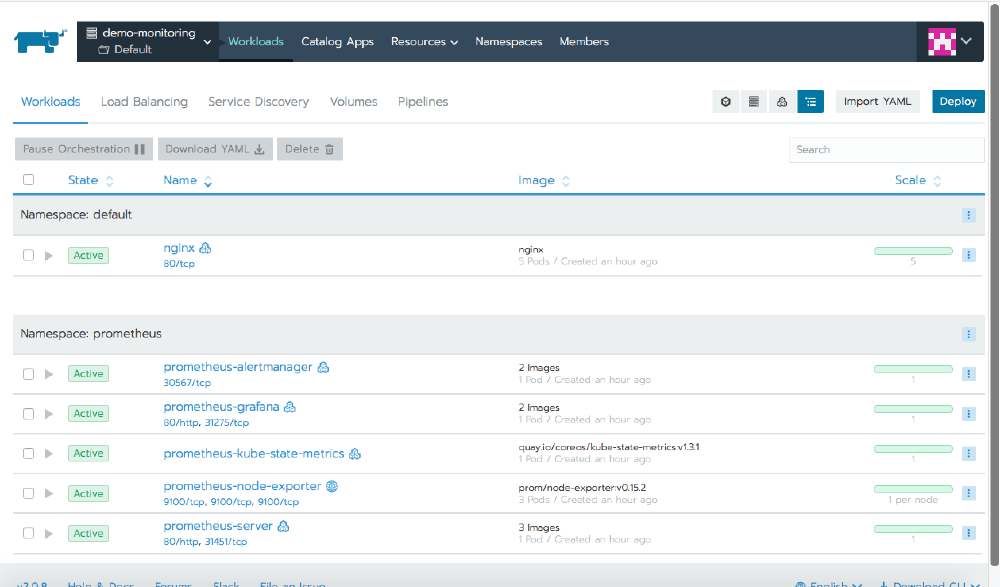 The defaults set up a Layer7 ingress using xip.io, and we can see this on the Load Balancing tab. Clicking on the link will open the Grafana dashboard. 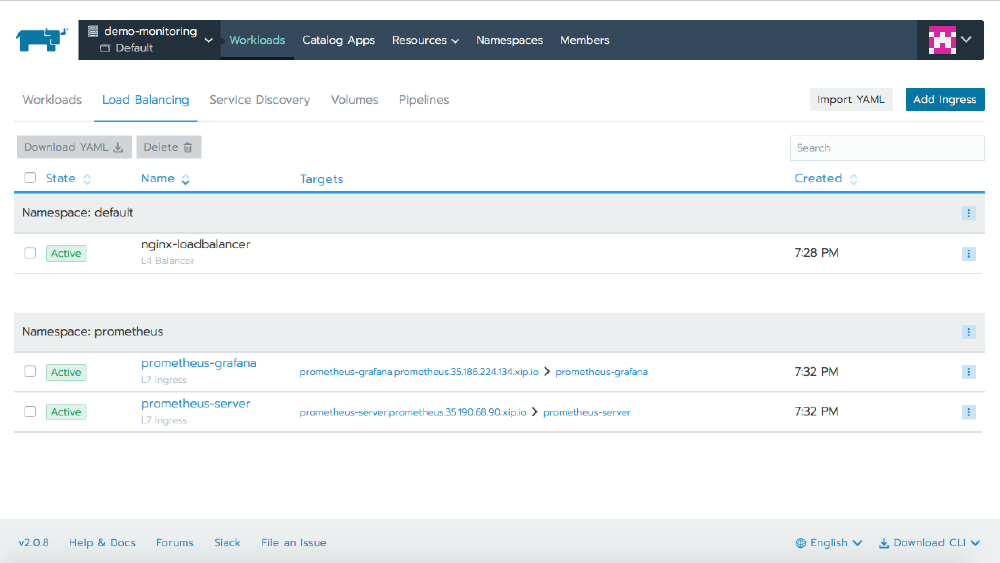 The Prometheus installation also deployed several dashboards into Grafana, so immediately we can see information about the cluster and start to view its performance over time. 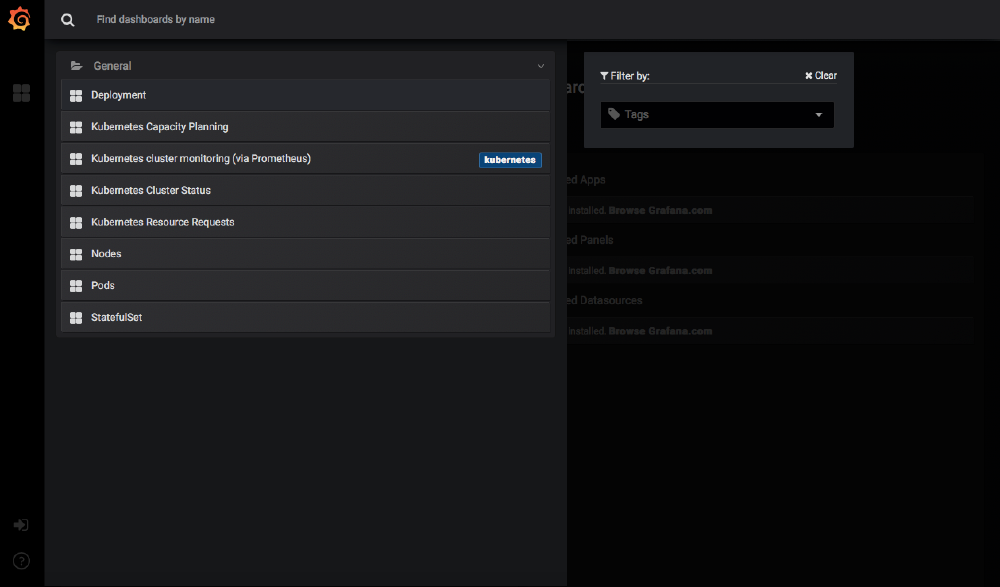 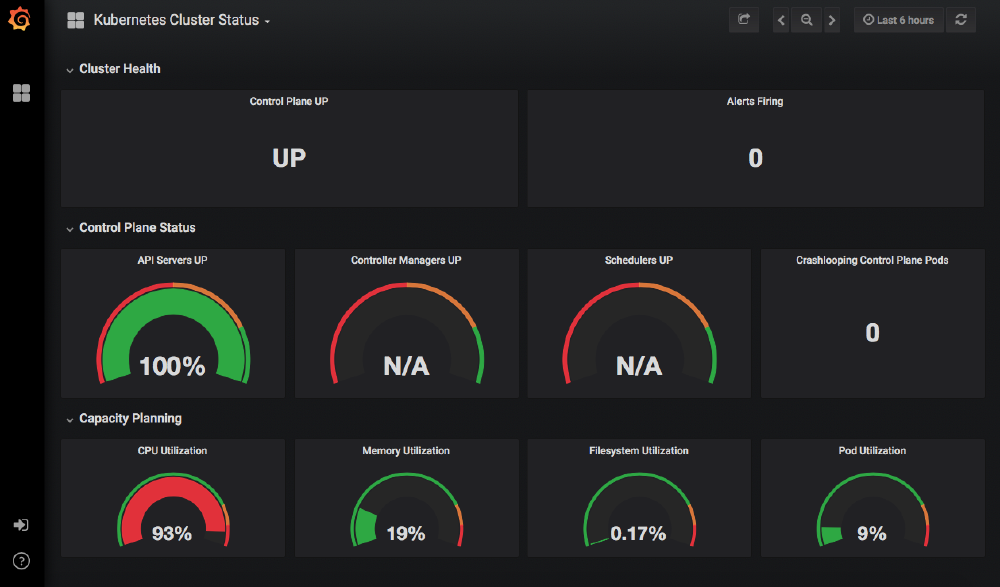 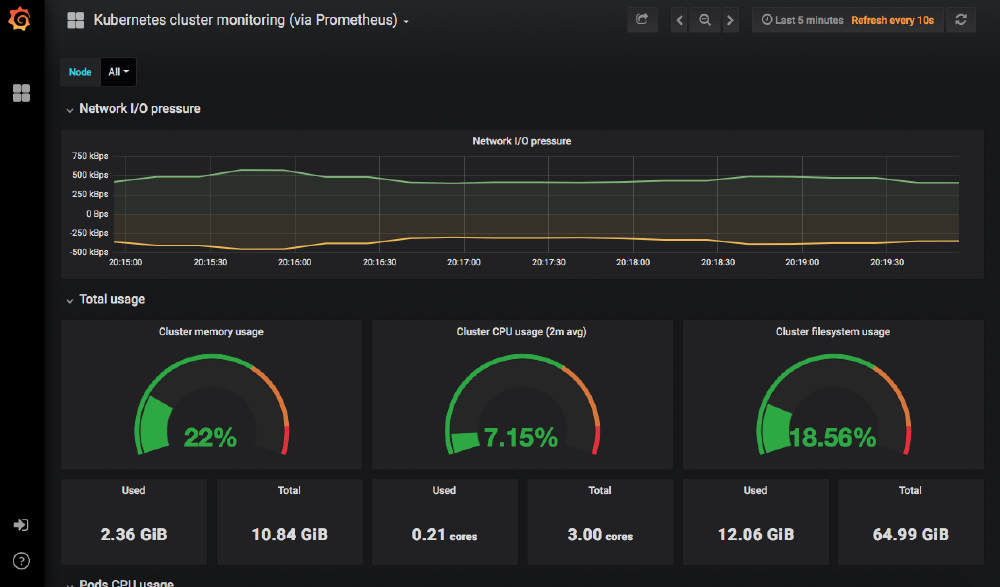 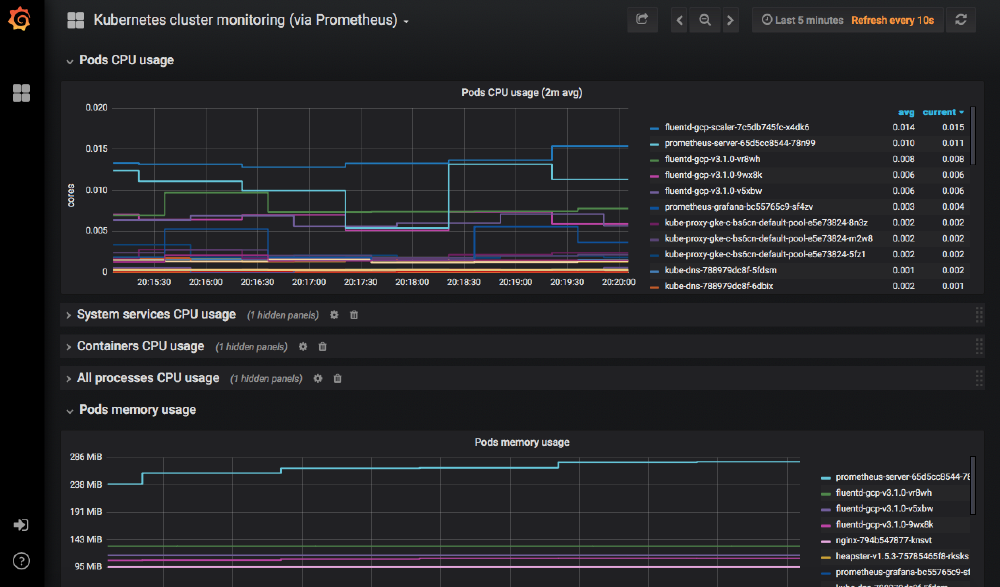 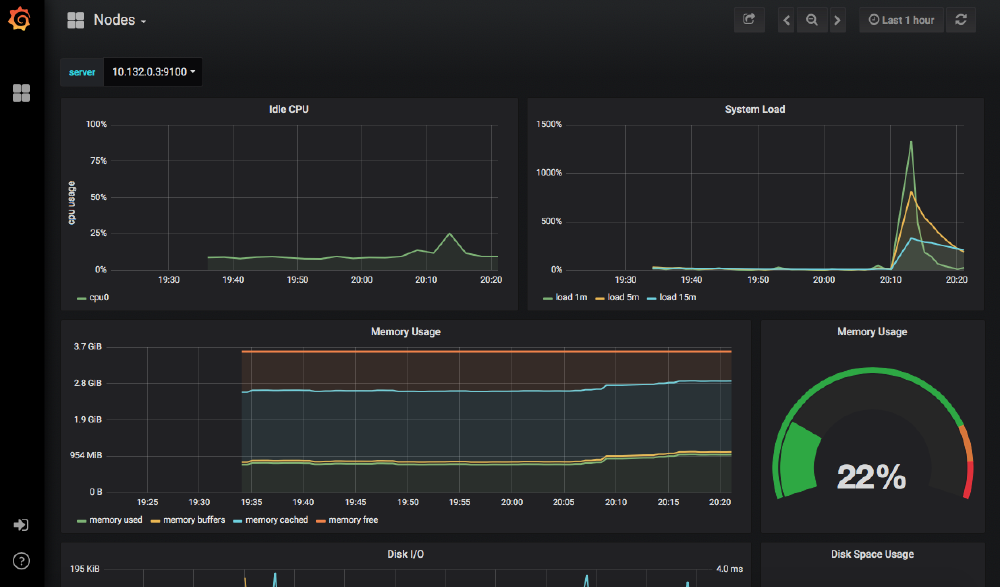 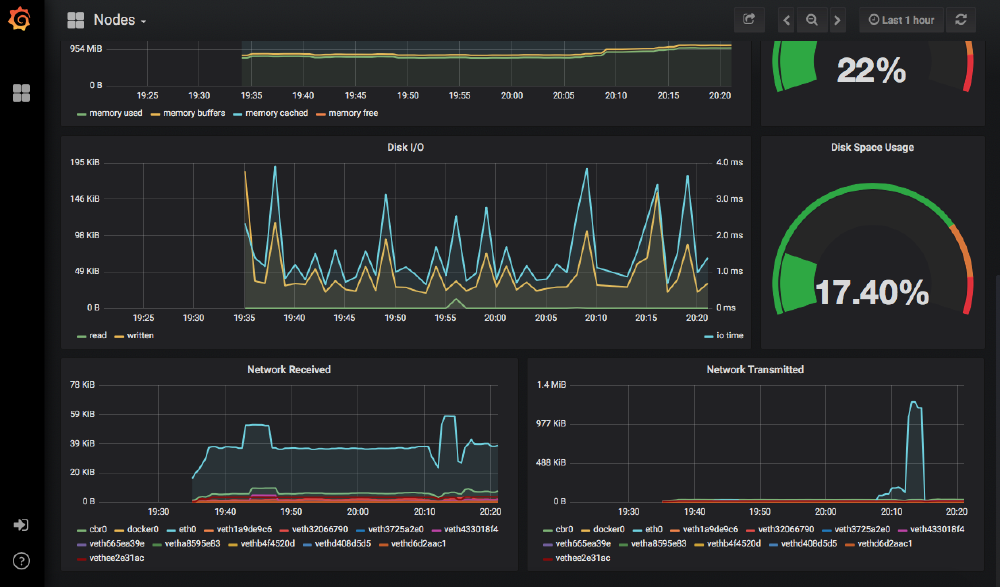 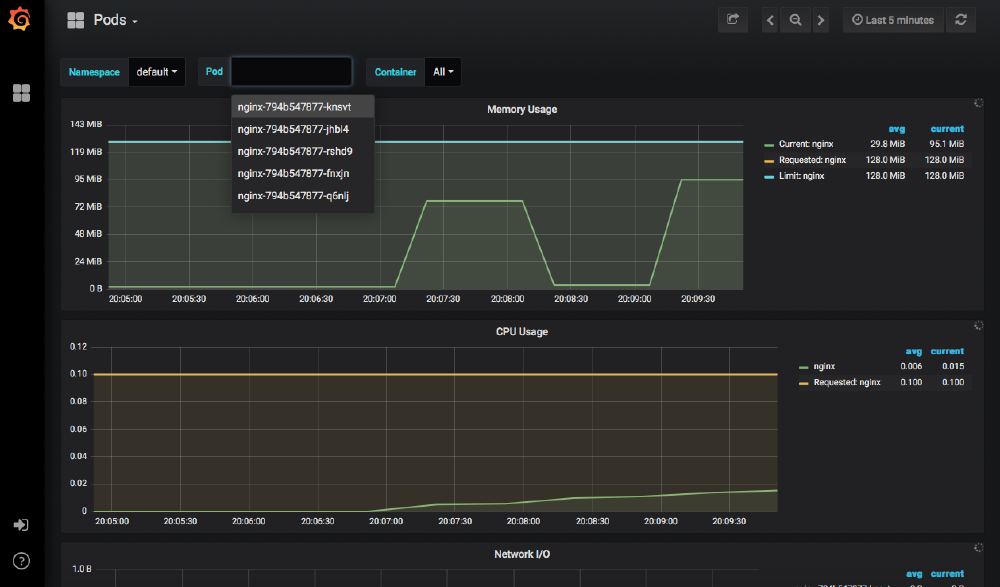 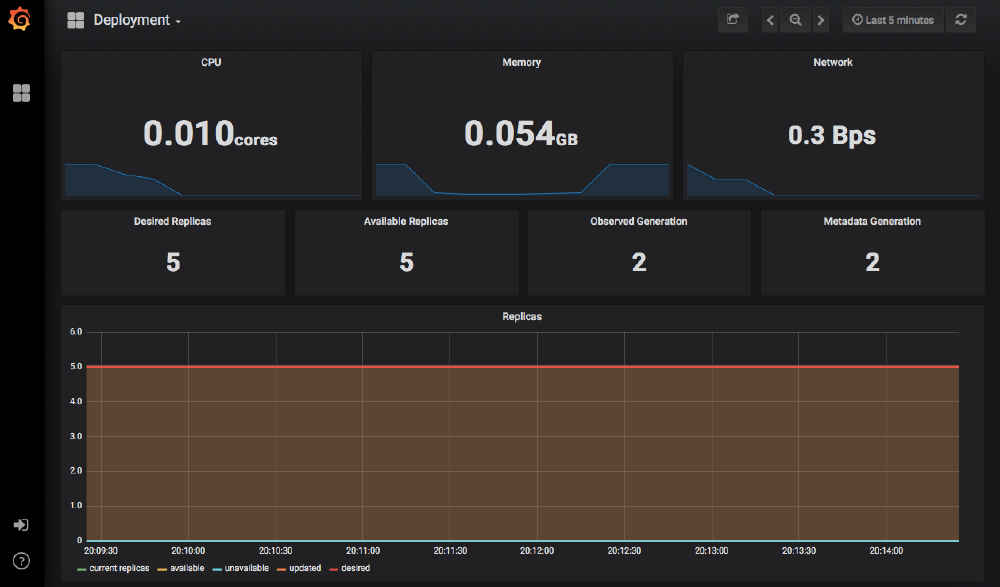 Kubernetes works tirelessly to keep your applications running, but that doesn’t free you from the obligation of staying aware of how they’re doing. As soon as you begin to rely on Kubernetes to do work for you, the responsible thing to do is deploy a monitoring system that keeps you informed and empowers you to make decisions.

Prometheus and Grafana will do this for you, and when you use Rancher, the time it would normally take to deploy these two applications is reduced to mere minutes.