A Journey from Cattle to Kubernetes! | SUSE Communities
< Back to Blog

A Journey from Cattle to Kubernetes!

The past few years I have been developing and enhancing Cattle, which is the default container orchestration and scheduling framework for Rancher 1.6.

Cattle is used extensively by Rancher users to create and manage applications based on Docker containers. One of the key reasons for its extensive adoption is its compatibility with standard Docker Compose syntax.

With the release of Rancher 2.0, we shifted from Cattle as the base orchestration platform to Kubernetes. Kubernetes introduces its own terminologies and yaml specs for deploying application management services and pods that differs from the Docker Compose syntax.

I must say it really is a big learning curve for Cattle developers like me and our users to find ways to migrate apps to the Kubernetes-based 2.0 platform.

In this blog series, we will explore how various features supported using Cattle in Rancher 1.6 can be mapped to their Kubernetes equivalents in Rancher 2.0.

Who Moved My Stack? 🙂

In Rancher 1.6, you could easily deploy services running Docker images in one of two ways: using either the Rancher UI or the Rancher Compose Tool, which extends the popular Docker Compose.

With Rancher 2.0, we’ve introduced new grouping boundaries and terminologies to align with Kubernetes. So what happens to your Cattle-based environments and stacks in a 2.0 environment? How can a Cattle user transition their stacks and services to Rancher 2.0?

To solve this problem, lets identify parallels between the two versions.

Some of the key terms around application deployment in 1.6 are:

Equivalent key terms for Rancher 2.0 are below. You can find more information about them in the Rancher 2.0 Documentation.

After learning the parallels between Cattle and Kubernetes, I began investigating options for transitioning a simple application from Rancher 1.6 to 2.0.

For this exercise, I used the LetsChat app, which is formed from a couple of services. I deployed these services to a stack in 1.6 using Cattle. Here is the docker-compose.yml file for the services in my stack: 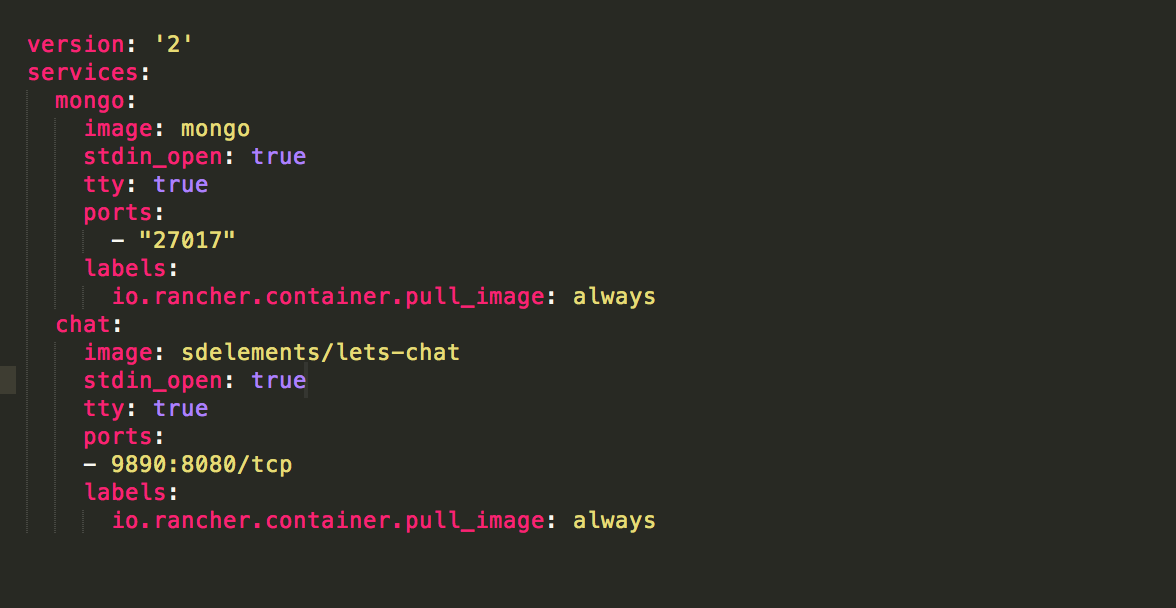 Is provisioning and configuring service discovery in Rancher 2.0 as easy as it was in 1.6?

A Cluster and Project on Rancher 2.0

First, I needed to create a Rancher 2.0 Kubernetes cluster. You can find instructions for this process in our Quick Start Guide.

In Rancher 1.6, I’m used to deploying my stacks within a Cattle Environment that has some compute resources assigned.

After inspecting the UI in Rancher 2.0, I recognized that workloads are deployed in a project within the Kubernetes Cluster that I created. It seems that a 2.0 Cluster and a Project together are equivalent to a Cattle environment from 1.6!

However, there are some important differences to note:

With my new Kubernetes cluster in place, I was set to launch my applications the 2.0 way!

I navigated to the Default project under my cluster. From the Workloads tab, I launched a deployment for the LetsChat and Mongo Docker images. 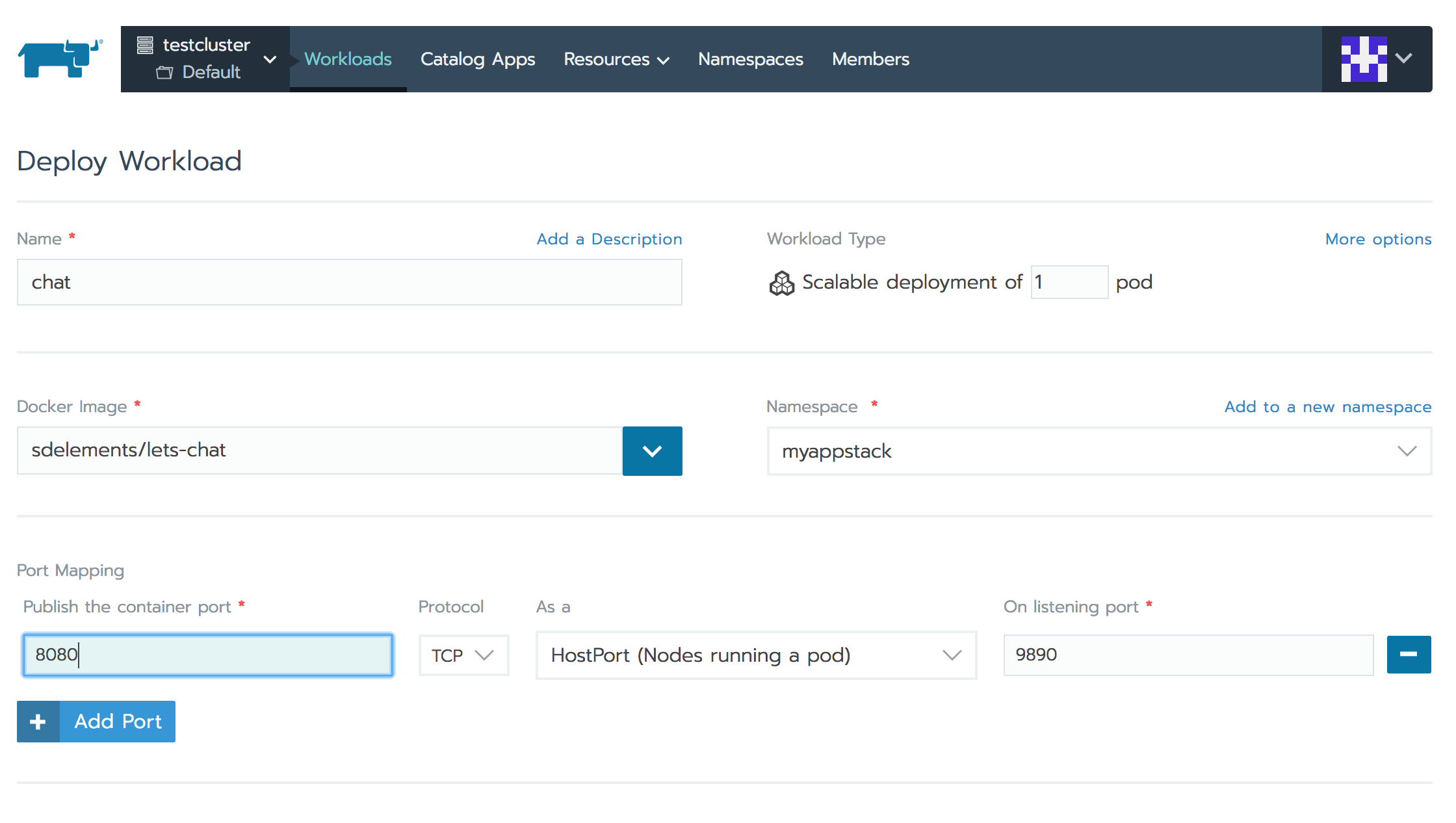 For my LetsChat deployment, I exposed container port 8080 by selecting the HostPort option for port mapping. Then I entered my public port 9890 as the listening port.

I selected HostPort because Kubernetes exposes the specified port for each host that the workload (and its pods) are deployed to. This behavior is similar to exposing a public port on Cattle.

While Rancher provisioned the deployments, I monitored the status from the Workloads view. I could drill down to the deployed Kubernetes pods and monitor the logs. This experience was very similar to launching services using Cattle and drilling down to the service containers!

Once the workloads were provisioned, Rancher provided a convenient link to the public endpoint of my LetsChat app. Upon clicking the link, voilá! 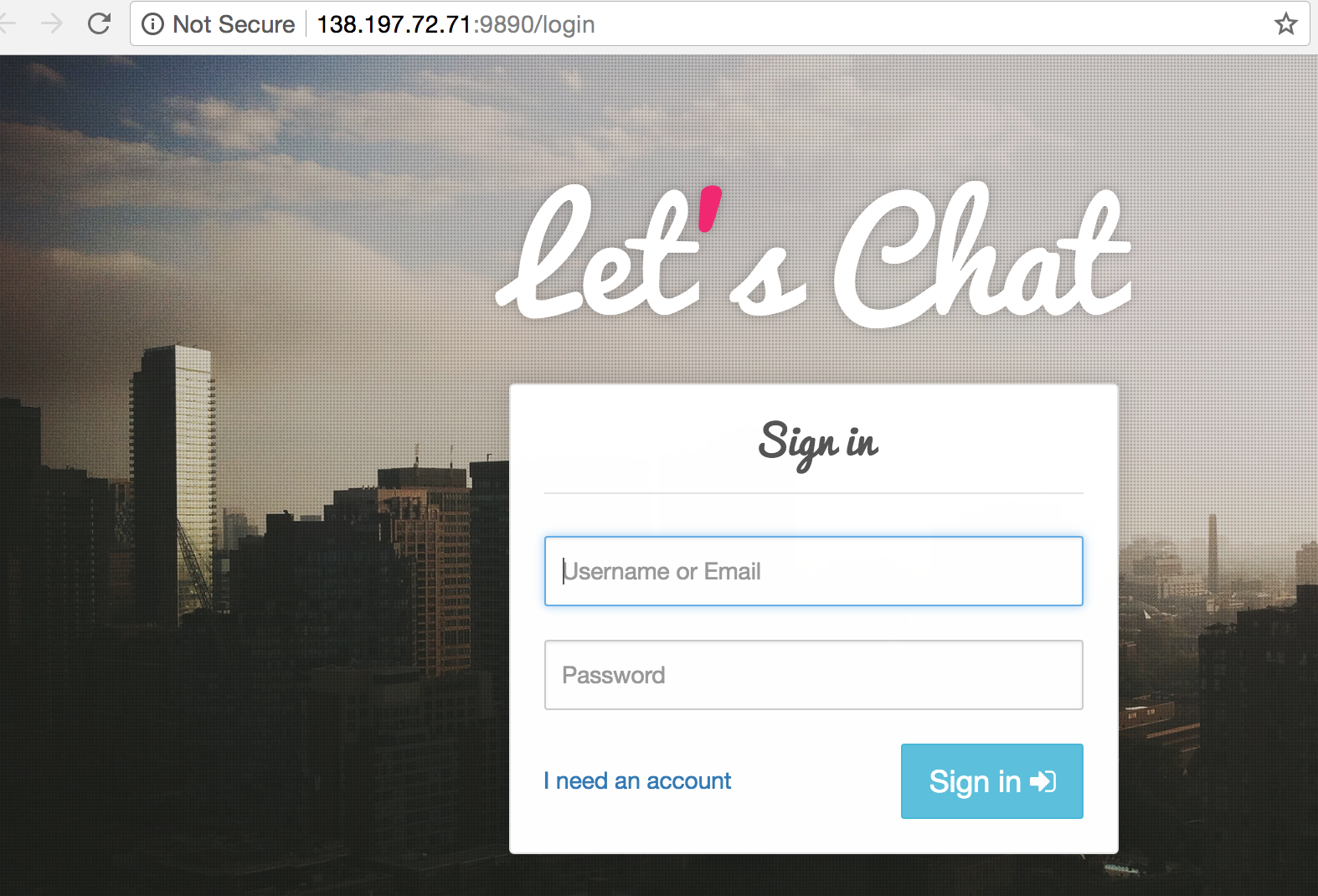 If you’re migrating multiple application stacks from Rancher 1.6 to 2.0, manually migrating by UI is not ideal. Instead, use a Docker Compose config file to speed things up.

If you are a Rancher 1.6 user, you’re probably familiar with launching services by calling a Compose file from Rancher CLI. Similarly, Rancher 2.0 provides a CLI to launch the Kubernetes resources.

So our next step is to convert our docker-compose.yml file to the kubernetes yaml specs and use CLI.

Converting my Compose file to the Kubernetes YAML specs manually didn’t inspire confidence. I’m unfamiliar with Kubernetes YAML, and it’s confusing compared to the simplicity of Docker Compose. A quick Google search led me to this conversion tool—Kompose.

Kompose generated two files per service in the docker-compose.yml:

Why is a separate service spec required?

A Kubernetes service is a REST object that abstracts access to the pods in the workload. A service provides a static endpoint to the pods. Therefore, even if the pods change IP address, the public endpoint remains unchanged. A service object points to its corresponding deployment (workload) by using selector labels.

When a service in Docker Compose exposes public ports, Kompose translates that to a service YAML spec for Kubernetes, along with a deployment YAML spec.

Lets see how the compose and Kubernetes YAML specs compare:

As highlighted above, everything under the chat service in docker-compose.yml is mapped to spec.containers in the Kubernetes chat-deployment.yaml file.

Note that the separate chat-service.yaml file contains the public port mapping of the deployment, and it points to the deployment using a selector io.kompose.service: chat), which is a label on the chat-deployment object.

To deploy these files to my cluster namespace, I downloaded and configured the Rancher CLI tool.

The workloads launched fine, but… 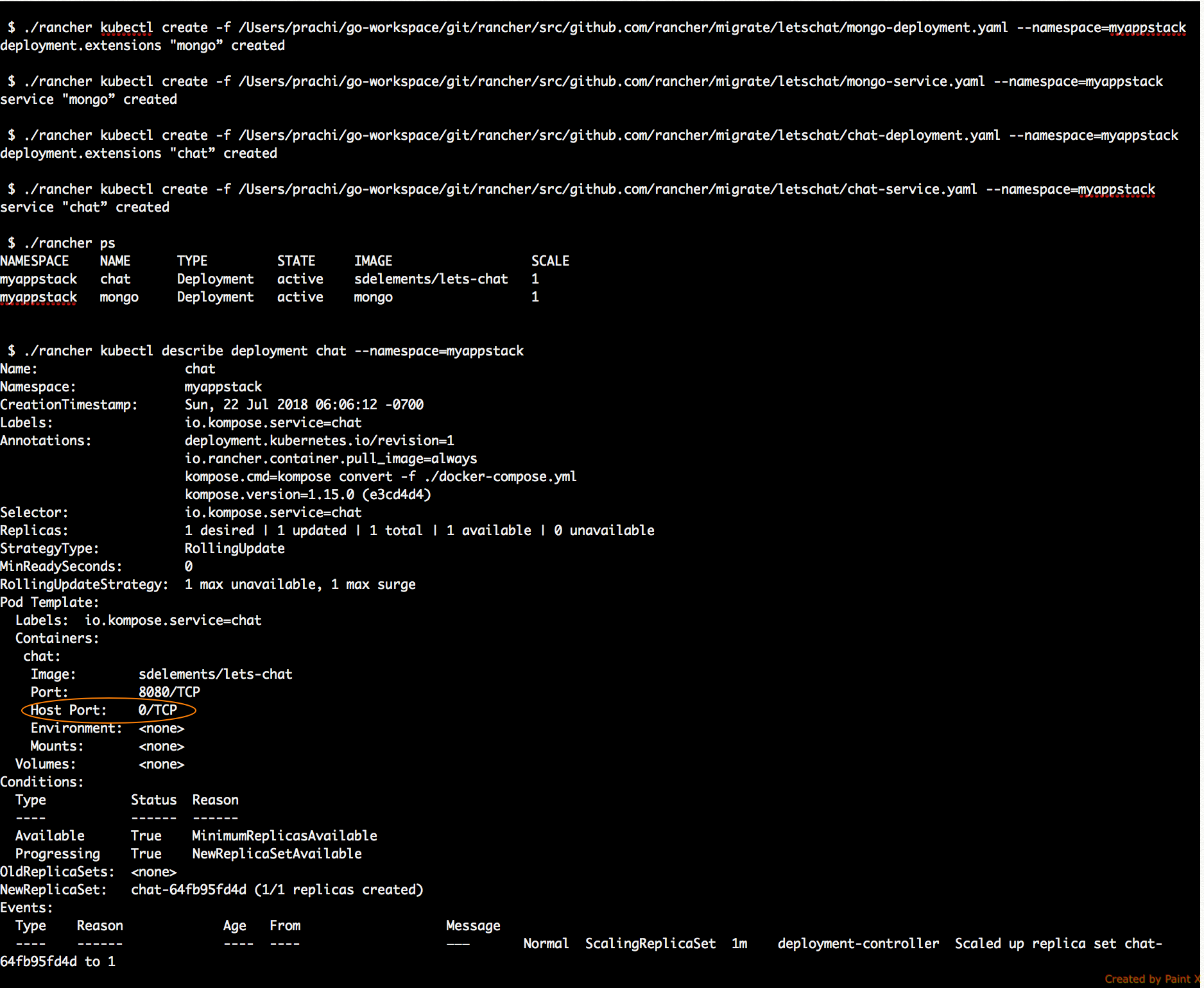 There was no public endpoint placed for the chat workload. After some troubleshooting, I noticed that the generated file from Kompose was missing the HostPort spec in the chat-deployment.yaml file! I manually added the missing spec and re-imported the yaml to publicly expose the LetsChat workload. 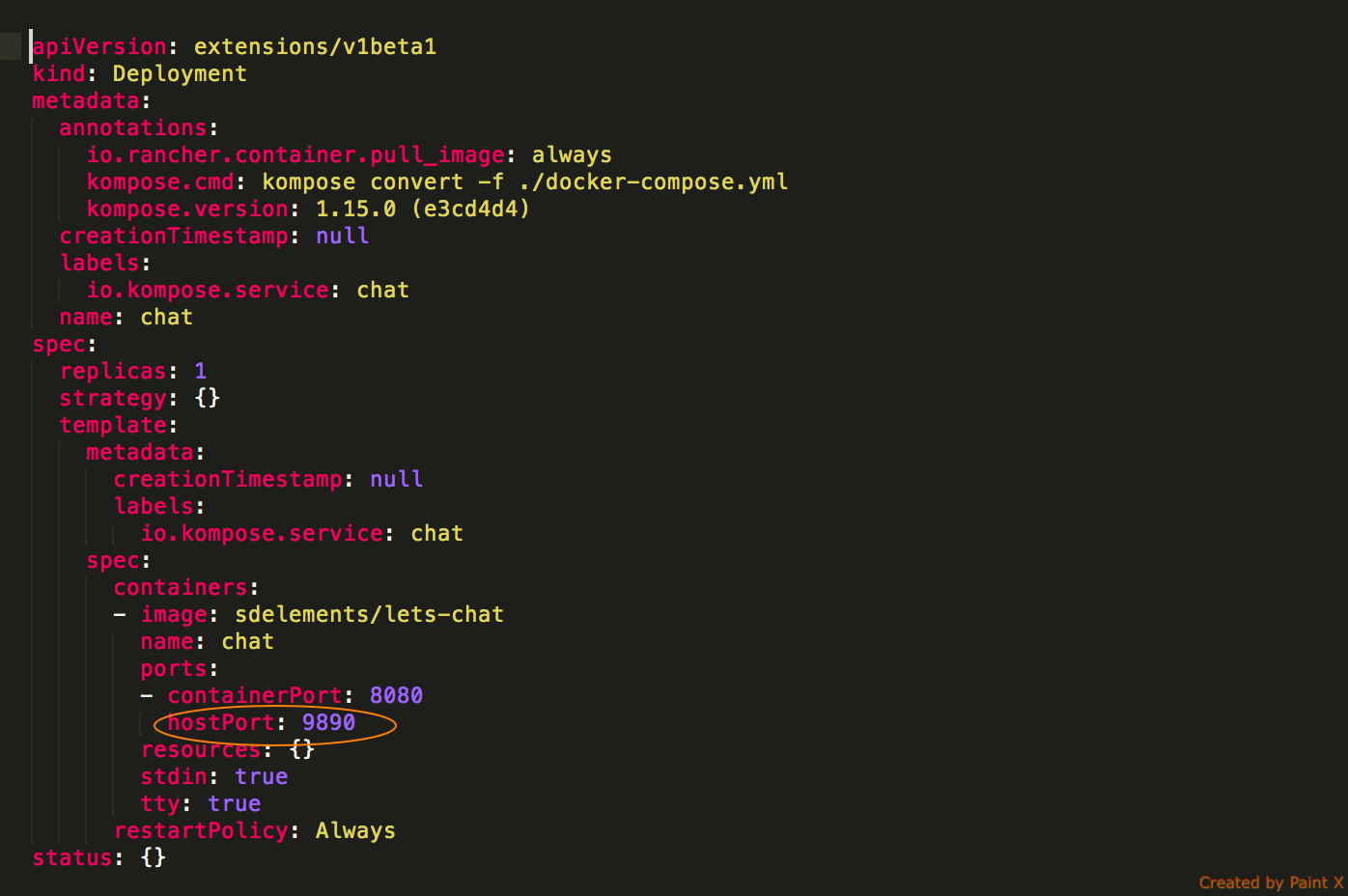 Troubleshoot successful! I could access the application on the Host-IP:HostPort. 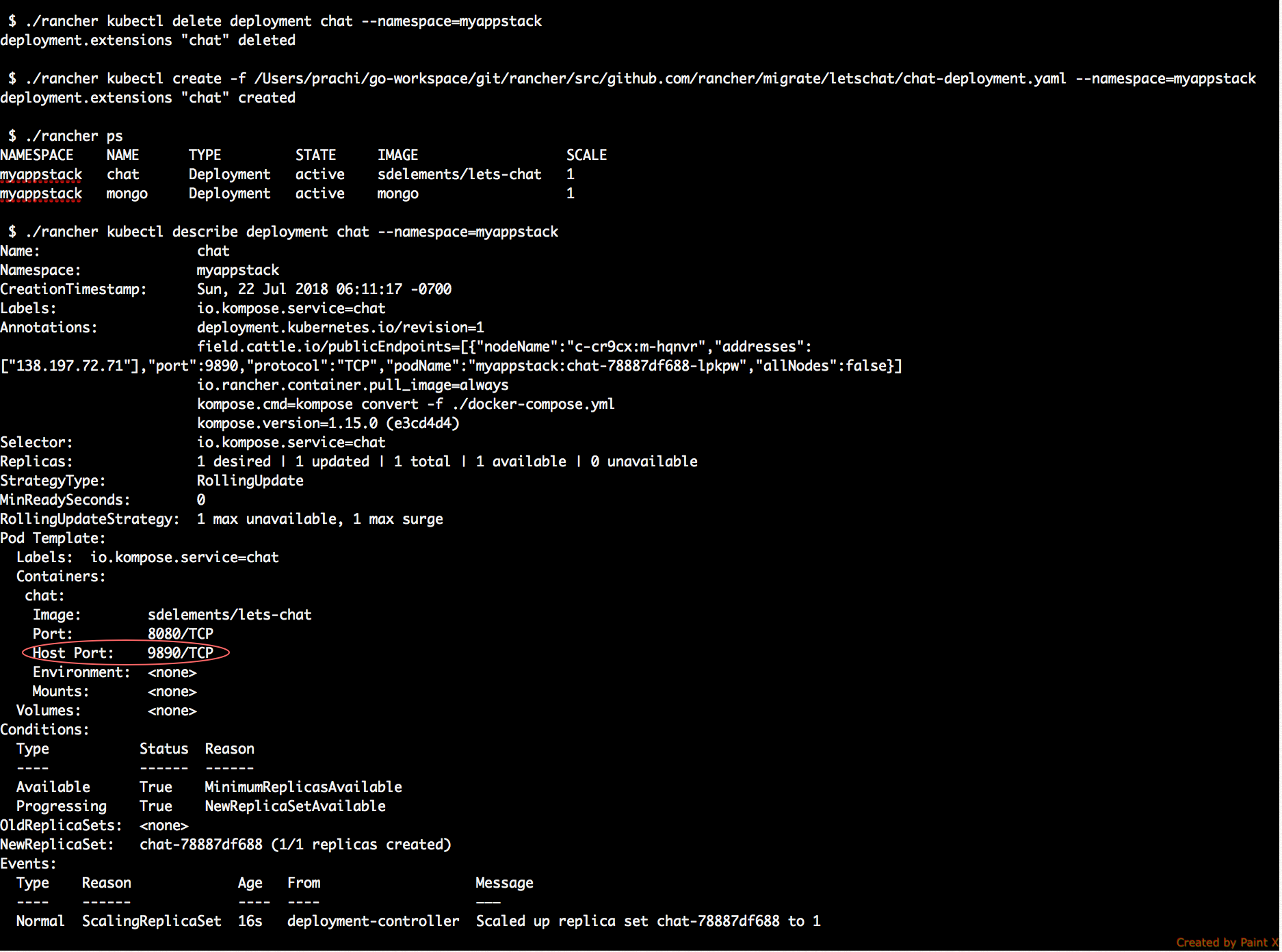 There you have it! Rancher users can successfully port their application stacks from 1.6 to 2.0 using either the UI or Compose-to-Kubernetes YAML conversion.

Although the complexity of Kubernetes is still apparent, with the help of Rancher 2.0, I found the provisioning flow just as simple and intuitive as Cattle.

This article looked at the bare minimum flow of transitioning simple services from Cattle to Rancher 2.0. However there are more challenges you’ll face when migrating to Rancher 2.0: you’ll need to understand the changes in Rancher 2.0 around scheduling, load balancing, service discovery, and service monitoring. Let’s dig deeper in upcoming articles!

In the next article, we will explore various options for exposing a workload publicly via port mapping options on Kubernetes.

How to Migrate from Rancher 1.6 to Rancher 2.1 Online Meetup
Key terminology differences, implementing key elements, and transforming Compose to YAML