As a network of microservices changes and grows, the interactions between them can be difficult to manage and understand. That’s why it’s handy to have a service mesh as a separate infrastructure layer. A service mesh is an approach to solving microservices at scale. It handles routing and terminating traffic, monitoring and tracing, service delivery and routing, load balancing, circuit breaking and mutual authentication. A service mesh takes these components and makes them part of the underlying infrastructure layer, eliminating the need for developers to write specific code to enable these capabilities.

Istio is an popular open source service mesh that is built into the Rancher Kubernetes management platform. This integration allows developers focus on their business logic and leave the rest to Kubernetes and Istio.

Citrix ADC is a comprehensive application delivery and load balancing solution for monolithic and microservices-based applications. Its advanced traffic management capabilities enhance application performance and provide comprehensive security. Citrix ADC integrates with Istio as an ingress gateway to the service mesh environment and as a sidecar proxy to control inter-microservice communication. This integration allows you to tightly secure and optimize traffic into and within your microservice-based application environment. Citrix ADC’s Ingress deployment is configured as a load balancer for your Kubernetes services. As a sidecar proxy, Citrix ADC handles service-to-service communication and makes this communication reliable, secure, observable and manageable.

The Rancher Apps Catalog provides a UI platform for DevOps engineers to deploy and run applications with out-of-the-box capabilities like monitoring, auditing and logging. You can find the Citrix Istio ingress gateway and sidecar injector in the Rancher catalog. 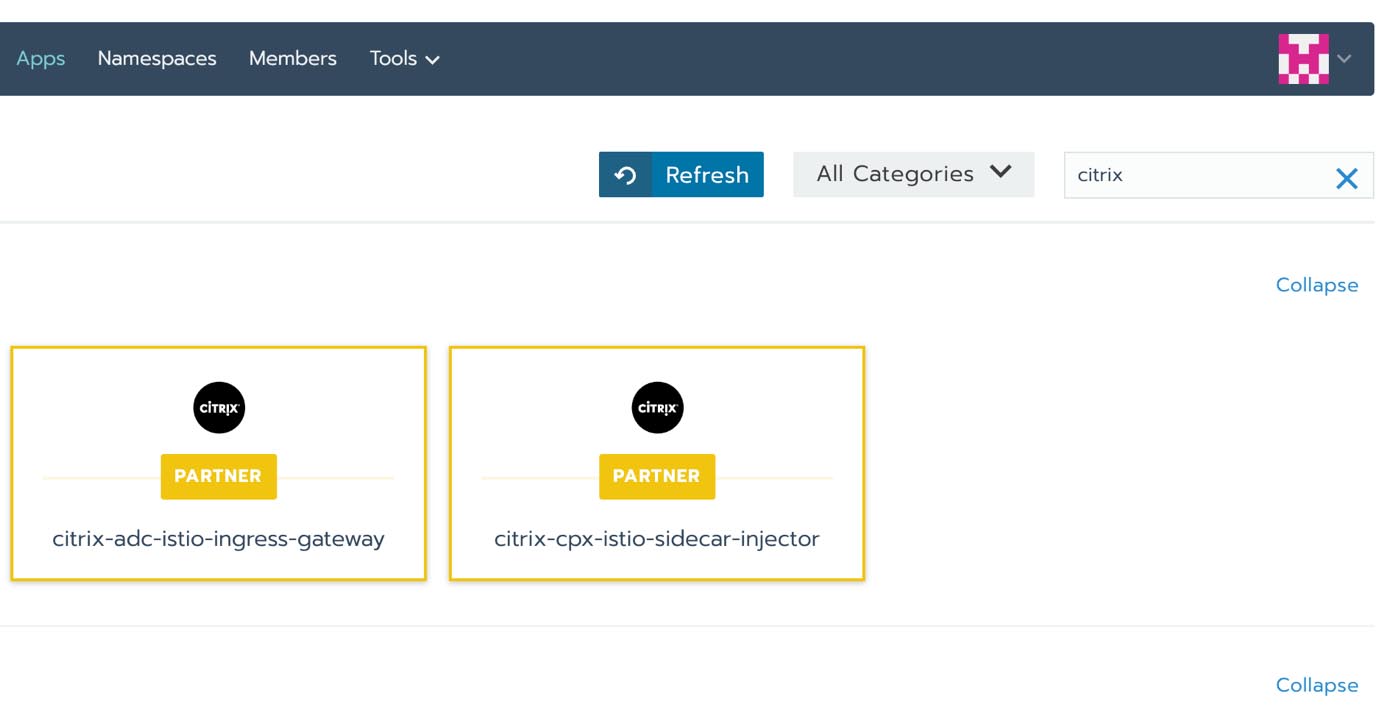 Citrix ADC as an Ingress Gateway for Istio

An Istio ingress gateway acts as an entry point for incoming traffic and secures and controls access to the service mesh. It also performs routing and load balancing. Citrix ADC CPX, MPX or VPX can be deployed as an ingress gateway to control the ingress traffic to Istio service mesh. 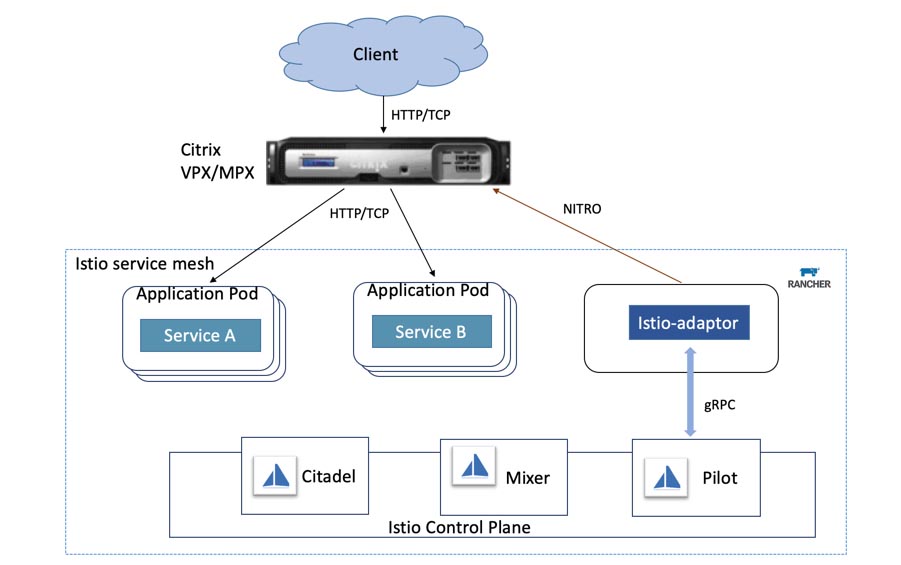 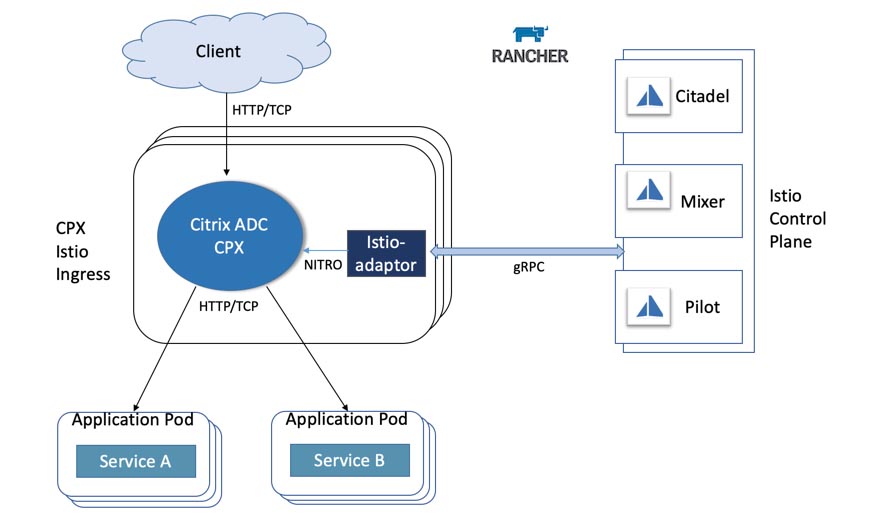 Citrix Istio Adaptor is open source software written in Go. Its main job is to automatically configure the Citrix ADC deployed in the Istio service mesh. Components such as Istio Pilot, Citadel and Mixer make up the Istio control plane. The pilot is the control plane component that provides service discovery to proxies in the mesh. It’s essentially a gRPC xDS server and is responsible for configuring proxies at runtime.

Istio-adaptor is a gRPC client to the xDS server and receives xDS resources such as clusters, listeners, routes and endpoints from the xDS server over a secure gRPC channel. After receiving these resources, the Istio-adaptor converts them to the equivalent Citrix ADC configuration blocks and configures the associated Citrix ADC using RESTful NITRO calls. This blog talks about Citrix Istio Adaptor in detail.

In the next section, we’ll set up Citrix ADC as gateway and sidecar using the Rancher catalog. Ingress Gateway describes a load balancer operating at the edge of the mesh that receives incoming connections. Sidecar proxy is enforced for monitoring, security and resource distribution.

Rancher Catalog for Citrix ADC as an Istio Ingress Gateway

In order to follow these steps, you will need to following:

a. For Citrix ADC CPX: Set the following environment variables with specified values:

b. For Citrix ADC MPX/VPX: Set the following environment variables:

Set the exposeNonHttpService variable to true.

Citrix ADC as a Sidecar for Istio 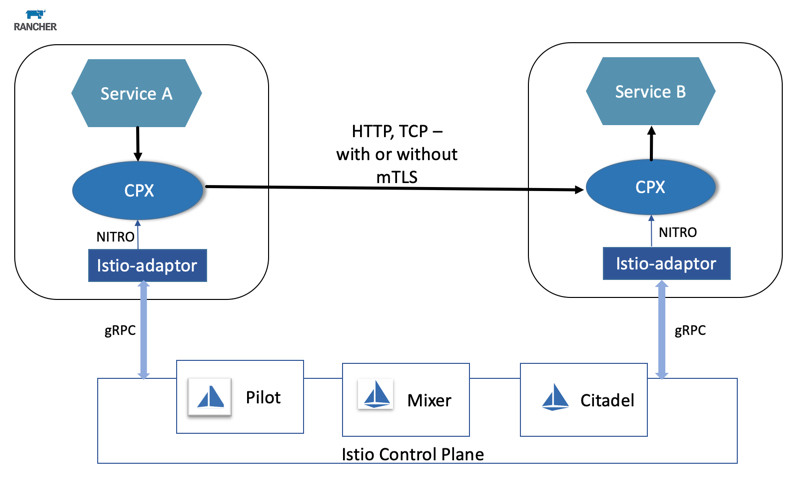 Do not enable Istio Auto Injection on application namespace.

To automatically deploy Citrix ADC CPX as a sidecar in application pod, the application namespace must be labeled with cpx-injection=enabled.

You can find an example of deploying the sample bookinfo application here.

Note: All images of the catalog were taken from Rancher version v.2.4.4, which supports Istio version 1.4.10 and Istio-adaptor with version 1.2.0. Learn more about the architecture here.

In this article, we have shown you how to configure ingress rules using Citrix ADC Istio ingress gateway and also sidecar proxy using Citrix CPX Istio Sidecar. The gateway allows external traffic to enter the service mesh and manage traffic for edge services. Citrix ADC as sidecar is used in service-to-service communication alongside each service through which all traffic is transparently routed.

Rancher’s catalog of Helm charts makes it easy to deploy and configure applications.

Learn how to run a multi-cluster service mesh in Rancher: watch our master class video.