The SUSE Flight Crew are coming to Berlin

This week, all around the world the SUSE Flight Crew are packing their bags and getting ready to converge on CityCube, Berlin for the OpenStack Summit. 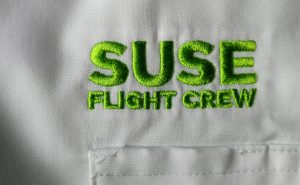 We’re all very excited as it feels like we’re coming home – SUSE were founded in Germany back in 1992, and our head office remains there in Nuremberg (or Nürnberg for those who actually live there).

Step back in time

A lot happened in 1992, and the world was a very different place to the world we know today. In 1992, the Maastricht Treaty was signed, effectively creating the European Union (yes, the same one that the UK is trying to exit right now, but we don’t like to talk about that over here). George H.W. Bush (father to future president George W. Bush) was the president of the United States, and signed the North American Free Trade Agreement (NAFTA) that same year, with Mexico and Canada. When Bill Clinton became US president later that year, he signed the NAFTA into law. 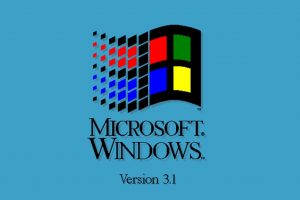 In 1992, the world of IT was also vastly different. Those people out there that can’t cope with a command line interface will recall that Windows 3.1 was the popular (commercial) graphical operating system of the day (I have very fond memories of MS DOS though), with Windows for Workgroups being released that year to start to make it easier for organisations to better share data and collaborate.

SLS (SuSE, as it was, Linux Server) was released that year, which was the first comprehensive Linux distribution. If you wanted to communicate with someone miles away without picking up the phone or putting pen to paper, you had to fax them (if you don’t know what this is, ask your parents), but later in 1992, mobile text messaging was introduced. For trivia fans, the first text message read “Merry Christmas”, and was sent from a PC to a mobile phone on December 3rd.

There was no cloud in 1992, but networking protocol TCP/IP was introduced, which laid the foundation for building the global network that would become the Internet.

So much has changed in IT that the OpenStack Summit is the ideal place to come to hear from companies who have undergone the digital transformation process and moved to software-defined infrastructure. Companies like QSC AG, for example.

SUSE Customer QSC will be taking the stage on Tuesday in Berlin to talk about Software Defined Infrastructure at QSC – a customer’s journey to OpenStack and Ceph.

On Tuesday morning, Mark Darnell, one of our product managers, will be talking about OpenStack in the Telco World, asking just what will it take for full production readiness? With an increasing number of telcos turning their eye to OpenStack, this is bound to be a popular session.

If you’re looking to brush up your OpenStack skills, then SUSE’s training guru Ron Terry will be running his ever popular (and free) OpenStack Administration – Prepare for the Certified Exams course over Wednesday and Thursday (day one and day two links). Note that these are exceptionally popular, so if you haven’t already signed up, do it quickly as they fill up very fast (if they haven’t already).

Keith Berger and Nicolas Bock will be extending the session that they ran in Vancouver earlier this year around troubleshooting OpenStack on Wednesday, helping you to dig deeper into network operations. This will be another very popular session, so do make sure you get there early to get a seat so that you can learn in comfort!

In the demo theatre on Wednesday morning, John Tonello and Simon Briggs will be showing you how you can use SUSE OpenStack Cloud to get Kubernetes flying.

If you’re using containers, you might want to learn more about how to improve performance and security using Kuryr and Cilium with Rossella Sblendido also on Wednesday.

Dirk Muller from SUSE will be running a session with Tristan Cacqueray from Red Hat on Wednesday afternoon to help you to reduce log noise using machine learning.

Later on Wednesday, Antonio Ojea will be talking about how the open source ecosystem has evolved, with particular attention to OpenStack and Kubernetes models.

Maybe secure coding principles are of interest to you, in which case you should definitely check out Bryan Stephenson’s session on Thursday morning. Just make sure that you don’t over indulge the night before at the Meet and Geek pub crawl around Berlin, which is being sponsored by SUSE and some of the other Summit sponsors.

Some companies are now looking at moving their OpenStack clouds from PostgreSQL to MariaDB. Ralf Haferkamp and Steve Kowalik at SUSE have recently undertaken this perilous journey themselves and will be sharing their experiences on Thursday afternoon.

In addition to these sessions, you could also get project updates on Keystone and Ansible thanks to some great collaborative teams from across the industry, as well as a chance to meet the teams and get to know more about the projects in onboarding sessions for OpenStack Ansible and OpenStack Keystone.

The time of your life 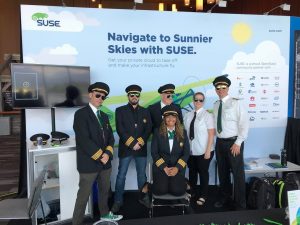 There’s so much going on at the Summit that you may struggle to fit it all in. No matter what you do though, make sure to take the time to visit SUSE at booth B3 to meet the SUSE Flight Crew. As always, we’ll have some fantastic giveaways (including cuddly chameleons) in addition to being there to help you learn more about software-defined infrastructure, OpenStack and Ceph. We’re bringing along our mini Ceph cluster running on Raspberry Pi devices, and running demos to show you how to deploy Kubernetes on OpenStack. I always have a great time at the OpenStack Summits, catching up with old friends, making new ones, learning lots, and I know that you’ll also have the time of your life in Berlin – I look forward to seeing you there!

2,213 views
Matthew JohnsI have over 20 years' experience in the IT, cloud and hosting industry gained in a variety of roles spanning project management to product release and product marketing. I’m responsible for product marketing for SUSE OpenStack Cloud, and have been working with OpenStack since it was released in 2010. Outside of work, I enjoy running, cycling, great beer (craft, cask, keg - call it what you like as long as it tastes good), spending time with my family, playing the piano and charity fundraising – I’ve been supporting the Movember Foundation since 2006, and have run multiple races, climbed mountains and cycled around the UK for many charities over the years.
Back