This last May, at OpenStack Summit Atlanta, Intel held a “Rule The Stack” competition to see who could build a complete OpenStack infrastructure the fastest.

Then this week at OpenStack Summit Paris, Intel upped the ante.  This time around the deployed OpenStack infrastructure would need to be able to withstand a series of attacks while still remaining functional.

The pressure was on.  Could SUSE retain the crown?

Okay, so the title of this post already gave away the answer.  Of course SUSE won.  This time by even more than a mile.

From the victor, SUSE’s Adam Spiers:

“The clock was started when we booted the first node for installation, and stopped when we declared the nodes ready for stress-testing by the judges. It took us 53 minutes to prepare 6 servers: two admin servers (one as standby), two controllers, and two compute nodes running the KVM hypervisor.”

But the real question is… how does this compare to the competition?

“At least three other well-known combinations of OpenStack distribution and deployment tools were used by other competitors. No-one else managed to finish deploying a cloud, so we don’t know how they would have fared against the HA tests.”

For the details on how Adam (with help from Dirk Müller) pulled off this, most outstanding, victory… check out this detailed write-up of the strategy they used. 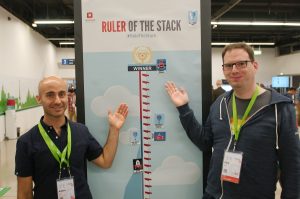