If you haven’t been hanging around the Ceph world for a bit, you may not realize that Ceph was originally intended to provide a distributed file-system to service HPC clusters.  While this was the original intent, Ceph has taken a round-a-bout path to relevance in this space, especially given that we are only supporting multiple active MDS servers since the Luminous release.  The result is that we are, only now, really starting to see adoption in the HPC space, and mostly for the second tier storage needs.

Enter, the science project.  Given an all-flash environment on SATA SSDS with a fast storage pool on Intel Optane for the metadata, would it be possible to provide a reasonable storage environment for HPC clusters?

The all-flash direction mirrors what we are seeing in the industry where adoption is ramping up with the cost of those Enterprise SATA SSDs dropping under $500 per TiB and capacities climbing quite dramatically.  For example, you can look on the open market and find a number of 1TB Enterprise SSDs well under $500 and the largest devices, like the Seagate Nytro 15.36TB SSD, at or under the $500/TiB price point.

Armed with this knowledge and some collaboration with our friends at Intel, I launched into an effort of iterative testing and tuning over the last six months.  The tuning includes testing kernel boot parameters, sysctl.conf tuning for network and various system level tunings, and tuning the Ceph cluster itself.

Most of the work is focused around Media & Entertainment use cases, but, being a long term advocate and supporter of the HPC business at SUSE, I knew the same would apply to compute clusters, I mean, that’s really what a render farm is, right?

This is where the IO500(https://www.vi4io.org/io500/start) comes in.  The IO500 is an industry group that is trying to highlight storage design and tuning benefitting the performance of HPC workloads through a competitive list.  The lists are released at ISC (https://isc-hpc.com) held annually in Frankfurt, Germany, and SC (https://sc19.supercomputing.org), held annually in the US the week before Thanksgiving, during a Birds of a Feather session.  Submissions are ranked based on a score composed of both metadata and data performance metrics (basically latency and throughput).  Submissions for the list include a number of parallel and distributed file systems representing systems at universities, labs, etc.

There are two lists.  The ranked list is composed of systems with many different node counts (both client and server) and is really there to highlight the biggest and best-tuned systems.  The second list is the 10-Node challenge.  This list highlights the best storage performance for a 10 client node environment.  This test is more oriented to clusters that can provide the best throughput and metadata performance for the smaller number of nodes.

We made submissions for both lists.

I’m sure everyone wants to know what the hardware environment looks like, right?  You’re probably expecting a crazy expensive and hard to procure and configure bit of hardware, right?  If that’s your assumption, you’d be wrong. This hardware is very standard, readily available from Lenovo, and is what is used for this reference design with the addition of the one Intel Optane DC P4800x device in each storage (OSD) node. 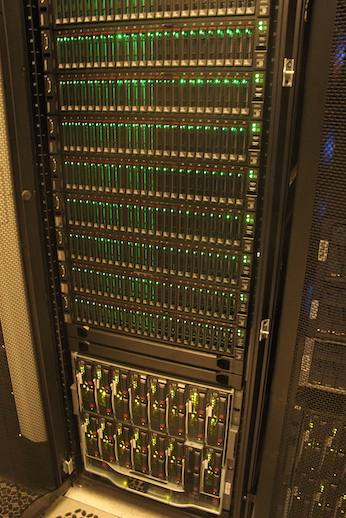 Armed with the testing software available from their GitHub site, I made a quick test run using just two nodes.  The results were impressive, meaning not dead last on the list.  This is where my rather competitive internal drive kicks in.  I thought, “What if I can score higher than the only other CephFS results on the list, posted by CERN?  That would be cool!”  This became my goal.

At this point, I went back and carefully read through the information on the IO500 site and decided we could probably be competitive on both the full list AND the ten node challenge list.  To start working towards this goal, I expanded my client footprint to the ten older blade servers connected with 10Gb connections and began pursuit of the goal.  One of the first things I encountered was that my metadata performance was low.  Well, probably so, I only had one server deployed, so I scaled to 3.  This immediately put me within striking distance of the CERN results.

The next step was to start tuning CephFS metadata server parameters.  The first tuning I did was the only thing I really needed.  Increasing the cache to 16GB of RAM and increasing on each of the three metadata servers enabled the cluster to forge ahead and provide results that came very close the CERN numbers on the existing list without doing ridiculous things like disabling cluster authentication or using a pool with no replication.  From my perspective, that would be cheating, I mean this seriously, what good is storage if there is no data protection in place?

After running the ten node results, I expanded to my full set of client nodes, only 14 total.  With that, I was able to post a result that would be the new number 40 on the prior overall list and slightly ahead of CERN’s numbers.  Not too shabby, especially given the rather small cluster and node count.

For everyone’s reference, I’ll put the tuning I did at the end.

So where did we end up?

On the ten node challenge list just released at the BoF here at ISC, the SUSE TigerShark cluster is number 27.

On the ranked list, we have come in at number 34, two above the previous results from CERN.

On the full list, which is all results posted to either, SUSE is well within the top 100 at positions 69 and 73.

The relative rankings on these lists indicate a pretty fair number of new or updated entries, especially as the number I posted would have put me in the top 10 of the prior 10 node challenge list, and around number 39 in the ranked list.  Overall, I’m pretty happy to have made a respectable showing given the small cluster and limited horsepower of the load generation systems.

Maybe I’ll see if I can get more clients with better connectivity for the next list as there were several instances where the load generation nodes were the bottleneck.  Look for updates on future lists.

For the CephFS configuration, I created the metadata pool on the Intel Optane DC P4800x devices.  This ensures a very low latency pool for metadata operations.  The storage pool is replicated on the SATA SSDs.

Now for the tuning.  First off, I disabled all the side-channel attack mitigations, maxed out CPU performance and enabled multi-queue block I/O on the kernel command line.

Next, I tuned the network and system a bit with sysctl.conf changes and some adapter tuning. Some of this is very specific to the Mellanox adapters I have in the cluster, so YMMV.  These tunings are all in a bash script and applied to all nodes, including the clients using salt.

And finally some ceph.conf tunings.  Basically, turn off all process logging, both on disk and in memory and tune up the MDS cache memory.