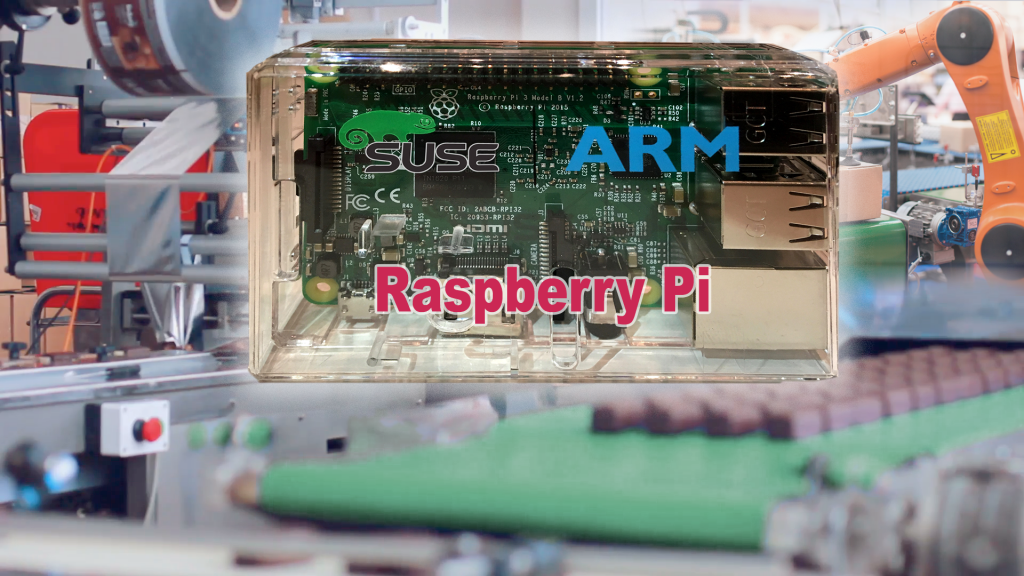 When SUSE created a Raspberry Pi image for SUSECon in 2016, there was a tremendous amount of interest. We saw thousands of downloads in just the first few days. Many people asked, “When are you going to offer real support for the Raspberry Pi?” The answer is Now!

Increasing customer demand drove our decision to offer commercial support for the Raspberry Pi to SUSE Linux Enterprise Server for ARM (SLES for ARM). A number of large companies decided to use Raspberry Pi based monitoring solutions in their industrial manufacturing operations.

These customers chose the Raspberry Pi for many reasons, but low cost, wide availability, and widespread familiarity with programming the Raspberry Pi topped the list. Most of these companies started out experimenting with the free Raspbian OS but wanted SLES for the actual deployment because they needed a secure, reliable, and supported operating system for their monitoring solutions.

A typical use case is an automated manufacturing operation that uses long lived capital equipment such as robotic screwdrivers. This older equipment often does not have built-in monitoring capability to send a signal when something goes wrong – they just stop. The Raspberry Pi based solution can monitor this type of industrial equipment using digital and analog I/O and can send an alert to a centralized monitoring system.

Some customers are also using the Raspberry Pi as an inexpensive shop floor computer.  Workers use a simple touch screen interface on the Raspberry Pi to flag problems with a manufacturing line such as lack of parts or machine failure.

Both of these use cases are intended to provide more granular information about industrial operations with a goal of reducing downtime and improving productivity.

We have heard of other potential uses for Raspberry Pi in commercial environments including digital signage, network monitoring, and IT monitoring as done by Malavix xymon (Malavix Partner Case Study). After this announcement, we will probably hear about many new ways to use SLES on the Raspberry Pi.

The biggest change is that we are offering support for this new Raspberry Pi SD-card image as part of SLES for ARM 12 SP3. The new image is based on SUSE Linux Enterprise Server (SLES) for ARM, so will include some fixes and enhancements from the latest SUSE Linux release.

The SUSE Engineering team has worked to reduce the size of the image. The image that was delivered for SUSECon in 2016 included developer-type packages such as compilers and debuggers. The new image focuses on providing IoT infrastructure. A number of packages have been removed to reduce the image size to around 630MB. Packages such as compilers can be installed using zypper and yast post installation and registration.

The new Raspberry Pi image based on SLES 12 SP3 for ARM is available now here.

What has stayed the same

The new image boots into a lightweight graphical desktop and includes Wi-Fi enablement by default. The I/O support is generally the same as it was before, including support for HDMI, Ethernet, and the GPIO ports. Like the previous image, we do not support audio, 3D graphics, Raspberry Pi touch screen, or camera. These restrictions are documented in the Release Notes and the Quick Start Guide.

Please note that the only the Raspberry Pi 3 Model 3 is supported. The new B+ model uses different I/O chips and will not work with the current SP3 image.

It will take a few more weeks to get pricing for SLES for ARM on the commercial price list. Partners and SUSE Direct Sellers that have significant opportunities for the Raspberry Pi should contact me, (jayk@suse.com) for instructions on how to order during this period. For others, please take advantage of the free sixty-day evaluation to start working with SLES for ARM on the Raspberry Pi.

This is only the first step in SLES for ARM support for the Raspberry Pi. In the future we intend to broaden the I/O support and allow for network installation of Raspberry Pi without having to use an SD-Card image. We also want to add support to other 64-bit Raspberry Pi hardware such as the Compute Module and the B+. We have received many requests for SUSE Manager support and are working to bring that to market as well.

The introduction of Raspberry Pi support in SLES for ARM is a significant milestone for SUSE and for the Raspberry Pi. We gratefully acknowledge the assistance and encouragement of Eben Upton and his Raspberry Pi Foundation to bring this product to market.

Have a lot of fun!