Firstly, if you’re reading this on 22nd November 2018, Happy Thanksgiving! Here in the UK, while we don’t celebrate Thanksgiving, we traditionally have celebrated the annual harvest of the

crops grown during our annual Harvest Festival. This isn’t such a big occasion though – no public holidays, no parade, and no massive discounts offered by shops. It dates back to when the United Kingdom was a mainly agrarian society, when all economy revolved around the growth of various crops and livestock, and is traditionally linked to the Harvest Moon – the full moon that occurs closest to the autumn equinox. The picture to the right is a corn dolly that my son made a few years ago – one of the traditional crafts made during, or to celebrate Harvest Festival. Once the corn has been harvested, the stalks are used to weave “dollies” – some actually human-shaped, others in different shapes of varying complexity.

One of the many traditions that Thanksgiving introduced that I particularly like is the giving of thanks. People get together and state what they are thankful for – food on the table, a roof over their heads, massive discounts with their favourite online retailer, a good job, great hair, and so on. One of the things that I’m very thankful for is the vibrant open source community that I’m a part of here at SUSE and within the wider OpenStack and Open Infrastructure community.

Take my breath away, Berlin 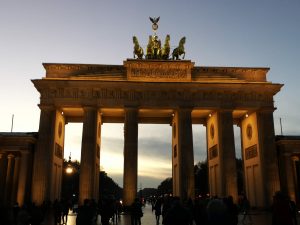 At the last ever OpenStack Summit (in case you hadn’t heard, they’re being renamed to the Open Infrastructure Summits from 2019), the community aspect was stunning. The keynote talks were delivered by a diverse spread of contributors from around the community and around the globe – developers, project technical leads (PTLs), members of the OpenStack Foundation and even customers.
The number of code commits made in the last year was announced at 70,000, with around 182 changes per day during the Rocky cycle. This is a frankly staggering number, but when you think that these changes came from multiple companies and individual contributors around the world – many of them in direct commercial competition with each other, that gives you an insight into the level of collaboration that exists in this incredible community.
One presentation that particularly highlighted this in the CI/CD track was the “Reduce your log noise using machine learning” session, given by Tristan Cacqueray from Red Hat and Dirk Müller from SUSE. Two engineers from competing companies working together to deliver meaningful content to their peers. One of the comments left by an attendee was “totally liked it, want to see more content like this and presented by people where you feel their dedication and willingness to let others participate.”

As a city, Berlin did not disappoint. Architecturally, it’s stunning with some fantastic buildings, including the incredible Brandenburger Tor (or Brandenburg Gate as we call it), above. This is truly a focal point for many in the city, and walking around it you get a feel for just how multi-cultural and accepting Berlin is. We were sadly a little too early for most of the Christmas markets that Germany is world renowned for, but managed to find a smaller one so that we could indulge ourselves in dumplings, Berlin’s famous curry wurst, frikadelle and other delicious morsels!

The “fireside chat” between Tilman Schulz from Vokswagen AG and Lauren Sell from the OpenStack Foundation was another great session during the Tuesday keynotes. While there was no actual fire for them to chat beside, some of the discussion produced literal fire to fuel discussion. One comment that Schulz made was that their OpenStack private cloud ended up being cheaper than running on public cloud. This is a debate that has long raged between public and private cloud companies, but it is clear that while the public cloud can be hugely beneficial for many workloads and businesses of all sizes, there are absolutely times when private cloud can become more cost effective if you are running at scale.

This and the majority of the other sessions at the Summit have been recorded, and will be uploaded onto the official OpenStack Summit site over the coming weeks, so if you missed a session, or couldn’t make it to Berlin and want to catch up on some of the sessions, then be sure to keep a close eye on the site once the recordings have all been edited and made available.
Some of the industry’s best known analyst firms have already been looking into this, with IDC producing a report on Cloud Repatriation in August 2018, and 451 Research issuing a blog in August 2018 discussing “The Trouble with Cloud Repatriation”. As one of my previous blogs explored, public and private clouds can, and will continue to co-exist, mostly peacefully.

While the SUSE flight crew may be mothballing our uniforms for a while, we’re gearing up to join the Open Infrastructure Summit in Denver in May 2019. 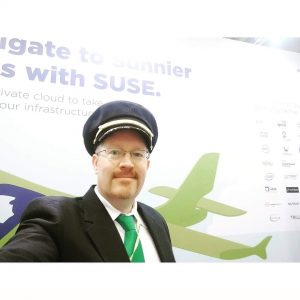 2,689 views
Matthew JohnsI have over 20 years' experience in the IT, cloud and hosting industry gained in a variety of roles spanning project management to product release and product marketing. I’m responsible for product marketing for SUSE OpenStack Cloud, and have been working with OpenStack since it was released in 2010. Outside of work, I enjoy running, cycling, great beer (craft, cask, keg - call it what you like as long as it tastes good), spending time with my family, playing the piano and charity fundraising – I’ve been supporting the Movember Foundation since 2006, and have run multiple races, climbed mountains and cycled around the UK for many charities over the years.
Back