Have you ever heard about the TOP500 supercomputer list? This project ranks and details the 500 most powerful computer systems in the world. The project was started in 1993 and publishes an updated list of the supercomputers twice a year. The first of these updates happens in summer during the International Supercomputing Conference (ISC) in Germany, and the second one is presented in November at the Supercomputing Conference (SC) in the US.

Well, this week I am attending the International Supercomputing Conference in Frankfurt. And today, the 45th edition of the list of the Top 500 supercomputers worldwide has been published. Right after the publication of the list, I´ve got an email from a colleague who was asking me about the list:
“Hey Meike, is there any surprise, anything unexpected, or anything special about the new list”. My answer was “I can tell you, the list is kind of  boring – for ‘the fifth list in a row’, Tianhe-2, a supercomputer developed by China’s National University of Defense Technology, has retained its position as the world’s No. 1 system, and I cannot see any real surprise.”

But then, during a break, I had a closer look at the list – and I realized there indeed is something special about it:

– The system ranked number one in the US (and #2 worldwide) is Titan, a Cray XK7 system installed at the Department of Energy’s (DOE) Oak Ridge National Laboratory. Titan is also one of the most energy-efficient systems on the list. 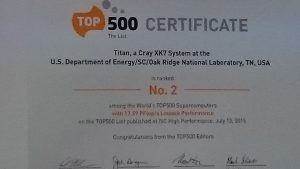 – The system ranked number one in Europe is Piz Daint, a Cray XC30 system installed at the Swiss National Supercomputing Centre (CSCS). 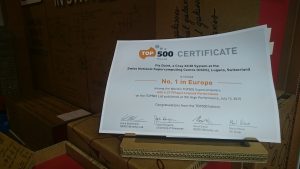 – The system ranked number one in Middle East (and the only new system among the top 10) is Shaheen II, a Cray XC40 system installed at King Abdullah University of Science and Technology (KAUST) in Saudi Arabia. Shaheen II is the highest-ranked Middle East system in the 22-year history of the list and the first to crack the Top 10. 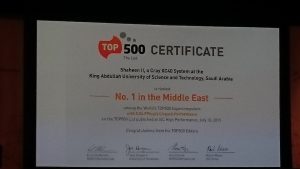 Three Cray systems, each of them ranked number one in the US, in Europe and in Middle East …

Now, what makes me be so excited about this fact? All three systems run the Cray Linux Environment (CLE), which is Cray’s customized version of the SUSE Linux Enterprise Server operating system. Isn´t this a good reason to be excited ?

6,337 views
Meike ChabowskiMeike Chabowski works as Documentation Strategist at SUSE. Before joining the SUSE Documentation team, she was Product Marketing Manager for Enterprise Linux Servers at SUSE, with a focus on Linux for Mainframes, Linux in Retail, and High Performance Computing. Prior to joining SUSE more than 20 years ago, Meike held marketing positions with several IT companies like defacto and Siemens, and was working as Assistant Professor for Mass Media. Meike holds a Master of Arts in Science of Mass Media and Theatre, as well as a Master of Arts in Education from University of Erlangen-Nuremberg/ Germany, and in Italian Literature and Language from University of Parma/Italy.
Back