Light at the End of the Tunnel

Lewis Pugh is a renowned endurance athlete and United Nations Patron of the Oceans. He made history last week when he swam under an Antarctic ice sheet, in a bid to call for the creation of Marine Protected Areas (MPAs) around Antarctica. SUSE is the proud sole gold sponsor for this historic swim, as part of the company’s larger sustainability efforts.  Lewis recounts his bold swim and what’s next in this blog post:

I didn’t realise the world contained so many different shades of blue. I was surrounded by ice, with the light refracting back at me from every side. I’ve never been more dazzled.

I was in East Antarctica, I was underneath the ice sheet, and I was swimming. It wasn’t exactly what I had planned.

It started out a luminous turquoise, then became royal blue. There were walls of ice all around me, a carved ceiling of ice above me. I swam around a corner and the colour became indigo, around the next corner and it was a psychedelic blue. Further along and it turned to violet – and then became so dark I had to take my goggles off to see where I was swimming.

That’s when I realised just how dangerous my situation was.

There is a saying that the darkest hour is just before dawn. I was halfway through the tunnel, and virtually blind, when I heard an almighty boom above my head.

It sounded like someone had set a cannon off inside the tunnel. I knew what that sound meant: the ice was on the move.

I peered up into the darkness and thought, ‘Oh no, not now!’ I couldn’t turn around and swim back against the flow of water. I had to push on.

Swimming in a dark tunnel with sharp stalactites hanging just above the water necessitated a slow and careful stroke. But I’ve never swum as fast as I did to get to the other end of that tunnel! All the blues in the world were not as beautiful as the light I saw as I emerged at the end of it.

I swam through that tunnel for 10 minutes and 17 seconds. It felt like 10 days before the team finally pulled me out.

East Antarctica is the coldest place on earth. Even so, everywhere I looked there was water rushing off glaciers, carving long curves deep into the ice sheet, or pooling into supra-glacial lakes.

Scientists from the University of Durham recently discovered over 65,000 lakes on the surface of the East Antarctic ice sheet. This coincides with significant melting of the sea ice around the coastline of Antarctica.

No one had ever swum in one of these rivers before. They are not only freezing cold, they are unstable – the ice can suddenly crack and they can drain out in a terrifying rush onto the bedrock hundreds of metres below. The meltwater lubricates the ice sheet, which causes it to become unstable; huge chunks then slide loose and surge out to sea.

So why was I attempting to swim here?  Quite simply to demonstrate the rapid changes that are taking place in Antarctica, and to call for the urgent establishment of a network of Marine Protected Areas (MPAs) around Antarctica, starting with a one million km2  MPA here, in East Antarctica.

An MPA will protect this last wilderness from the industrial overfishing that has devastated all the oceans of the world, and crucially make this region more resilient to the climate crisis.

I now head to Moscow, where I will encourage the Russian government to protect the waters around this mighty but fragile continent. Russia and China hold the key, since all the other nations responsible for protecting this region have already agreed to the East Antarctica MPA. Later I will travel to Beijing.

At the end of the year world leaders will gather in Glasgow for the COP 26 conference on Climate Change. I now have no doubt whatsoever that we face a climate emergency. There can be light at the end of this tunnel, but only if they take serious decisive action right now.

My message to them is simple: step up, or step aside. The time for talking has run out. 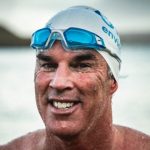 4,555 views
Lewis PughLewis Pugh is a renowned endurance athlete and United Nations Patron of the Oceans. He is set to make history as he attempts a one-kilometer swim in the most extreme conditions, in a bid to call for the creation of Marine Protected Areas (MPAs) around Antarctica.
Back